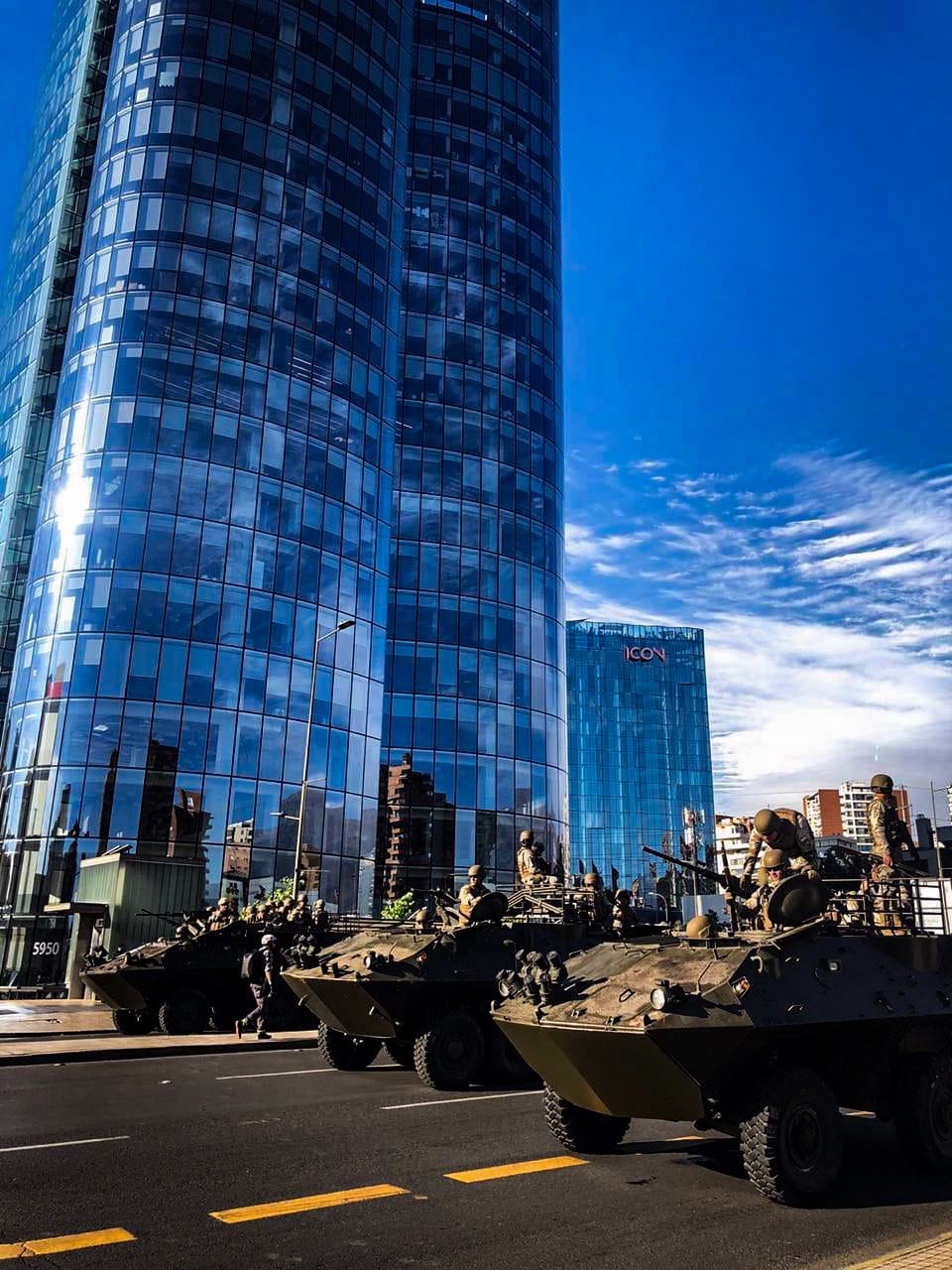 Chile has seen massive protests triggered by a 4¢ rise in metro fares during rush hour. But how can a list of five or even ten items encompass the experiences of over one million Chileans on the streets of Santiago?

The need for reforms and long-term solutions

Yes, there are those protesting the pension system which leaves middle-class pensioners impoverished (80% receive an income lower than minimum wage––USD$447/month). Yes, Chile’s substandard education system is such that cleaning ladies (nanas) earning minimum wage choose to send their children to partly-subsidized private schools instead of public schools. And yes, when the 80% of Chileans dependent on public healthcare FONASA (Fondo Nacional de Salud) need an appointment, they are put on a waiting list of close to two million people. None of these problems are new.

Andrés Velasco, former Minister of Finance of Chile (2006-10) and presidential candidate (2013), who is currently the Dean of the School of Public Policy at LSE, emphasised to The Beaver, “Why now?”

Some might say that the slowdown of Chinese consumption of copper (Chile’s primary export) in the past decade caused weaknesses in Chile’s ‘model’ to be exposed. Others might say that Chileans were fed up with oversold promises of foreign investment or with the constitution, which to this day, is the one from Augusto Pinochet’s dictatorship (with amendments).

When security forces were first deployed in the early days of protests, people were heard yelling “paco culiao” and “militar asesino,” roughly translating to “as*hole policeman” and “military assassin.” Yet, the protests began with the youth, those who did not experience the dictatorship. For young Chileans, the de facto socioeconomic reality feels constraining. Not only do public goods need reform, but also, a system of meritocracy needs to be born into the country.

Right now, meritocracy in Chile feels like a distant dream. Velasco explained that “places like the US, Canada, and Europe, have anti-discriminatory laws, but politically such laws have been difficult to first pass, and then to enforce.” Does this statement point to the bitter perception amongst protesting Chileans that political and business elites are one and the same?

After a month of violent protests, the government announced that a plebiscite will be held in April to determine whether a new constitution is written. Citizens can ‘approve’ or ‘reject’. Regardless, they will also vote on who should write a new constitution (the Parliament and delegated citizens, or an assembly of elected citizens). Since then, the situation on the streets has calmed significantly.

“If I were to rank Chile’s problems, I would place youth unemployment and underemployment on top,” Velasco explained to me. Naturally, university graduates expect to work in better jobs, yet those landing the best ones are those from a handful of elite high schools. Simultaneously, graduates may be supporting older relatives, receiving as little as USD $200/month from their pension, while having poor healthcare. Chileans find themselves juggling many problems in need of reform.

“Chile’s government needs additional permanent resources,” Velasco said, believing that the way to acquire these is to increase individual taxation from dividends and capital. He also highlighted that it is impossible to effectively tackle all problems at once: “All governments have limited financial and managerial resources.”

Chile’s middle class wants in on the fun

There is almost a sensation in other Latin American countries that Chileans are complaining because they “live in the nicest neighbourhood in the city, but the poorest house on the street.” Chileans are not starving. The country is not bankrupt. Yet, the country undoubtedly needs reforms.

Former Chilean president Ricardo Lagos, a long-time member of Chile’s Socialist party, was quoted in the Miami Herald on his recent trip to a government housing complex built under his administration. He was surprised to find that inhabitants were unhappy because their homes were built without garages. Neither he nor the residents, he stated, would have expected that they were going to be owning cars now.

This example illustrates Chile’s many successes, and also explains the worldwide shock in light of protests. According to The World Bank, Chile’s gini coefficient has fallen dramatically from 57.2 to 46.6 in 1990 and 2017 respectively. An article in Bloomberg cites Chile’s relative poverty rate at 16.1%, lower than in the US, and its Freedom House ranking (political and social freedom) at 94/100, the same as Germany.

But Chile is not a Scandinavian country with a tax base to implement massive reforms overnight. With those that President Piñera has already proposed, including a 20% rise in pensions and a 16% increase in the minimum wage, the government will run a fiscal deficit. Now, also consider that the peso just lost 4% of its value, hitting an all-time low. As Velasco pointed out, Chile needs long-term solutions.

The country is richer, but wealth has not been well-distributed. Since the country and its economy are relatively small and far away from major international trade routes, Chile has oligopolies controlling major economic sectors. In recent years it has been discovered that oligopolies have colluded to fix prices in key industries from drugs (where three chains control 90% of the market) to poultry.

Chile’s middle class is protesting under the perception that elites have been making all of the money resulting from economic growth. The lowest socioeconomic classes receive support –– the rise in metro fares had no impact upon them for example, but the middle class is left fending for themselves.

Chileans feel like politicians neglect their needs. The night that Piñera first declared a state of emergency he was photographed eating pizza with his grandson in an upscale neighborhood. “Estamos en guerra (we are at war)”, he stated later that night. Chile’s protests have been a social explosion with no clear leader, demands, or solutions.

Piñera’s government is out of touch with the people

Juan Nagel, a professor of economics at Universidad de Los Andes in Chile and former editor-in-chief of the Caracas Chronicles, pointed out to me that a “decision-making elitism” exists in Chile between academics and politicians. Chileans do not trust their government. A 2017 poll referenced in The Financial Times states that 68% of those surveyed considered political parties to be extremely corrupt. As of now, Piñera has an approval rating of 17%. Piñera, in the eyes of many, represents the problem.

Piñera has indicated that he is open to leading a process of compromise. Undoubtedly, no matter what course of action the administration takes, critics on either side will argue that it was either too much or too little. However, on the streets of Santiago, Piñera seems to be a scapegoat for Chile’s problems. Why are Chileans demanding Piñera’s resignation?

Perhaps because of the initial attitudes of those close to Piñera. Chile’s Economy Minister said that people could just wake up earlier to avoid the rise in metro fares during rush hour. The first lady called the protests “an alien invasion” in a leaked Whatsapp audio sent to a friend. Piñera later reshuffling 1⁄3 of his cabinet did nothing to ease demonstrations out on the streets, feeling superficial to many.

Piñera is playing a tricky game juggling social order and class peace. The government confirmed a plebiscite in April regarding the constitution. How long will the situation on the streets remain calm? Just as riots have eased significantly in the past few days, they could just as easily begin again.

The government’s recent hastiness to pass reforms on issues that have needed change for years “sets a dangerous precedent” (Nagel). Do politicians only care when Santiago begins going up in flames?

Last, but definitely not least, the distinction between looters and pacific protestors

The biggest mistake that the government made in the first days of protests was not distinguishing between looters and pacific protestors.

Teenagers have unlikely set fire to subway stations in the name of their grandma’s pension. The Guardian spoke to a woman cleaning up the San Pablo metro station with other community residents. She fully supports the peaceful protests advocating reform, but “not even during the time where we had the conflict with Pinochet did we touch the metro, because we knew the metro was for us.”

Looters have been provoking police by throwing molotov cocktails at them and yelling slurs of insults in their faces. Aida Santory, who managed the launch of the regional CNN network in Chile and has been covering the protests for an international news network, was present during the first protests that turned violent in Valparaíso:

“Protestors taunted the military for hours until armoured vehicles appeared and a loud speaker announced that children, elderly and pregnant women had to clear the area before tear gas was used to disperse the crowd. Then it became a game of cat and mouse around town with those that came prepared to fight the troops. The media, however, concentrated on the violence and looting that followed and the military response.”

CNN and other news networks have reported that “clashes between protesters and security forces” have led to around 20 dead (depending on the article). “This is misleading,” Santory says, “considering that over half have died while looting, several burned to death and another 2, including a 4 year old, were killed by a drunk driver who plowed into a group of protesters.” In protests during the second weekend of November, 45 civilians were wounded, but so were 150 police officers.

Undeniably, there have been instances of military power abuse. Rubber bullets shot at close-range distances have drawn worldwide attention, leading to increasing human rights concerns with a UN human rights commission currently in Santiago. Amnesty International made a preliminary conclusion that excessive use of force by government authorities have not been “isolated events.” Nagel believes that overall, there has been a failure in carabinero protocols when it comes to the use of violence, but that the government’s willingness to be audited is a good sign.

Pacific protests have been good for Chile. All social classes and generations have been coming together to address socio economic problems. Cabildos abiertos, town hall meetings, have been held in common spaces around Santiago where citizens have been discussing the different problems Chile faces, attempting to identify the roots of problems and propose solutions.

The Beaver asked Velasco about the likelihood of a populist leader coming to power in the 2021 elections. He said first, that “Chile tends to follow international and regional trends”, and second, that “atmospheres of division and fear are good for populists as the political centre is weakened and extremes grow.”

Ultimately, the priority of any Chilean leader needs to be the restoration of trust with its people. Chile does need reform, but nothing can be achieved if the two sides are unable to work together. Moving forward, Chileans need to continue engaging with the political system, both by voting and by protesting.

What is next for Chile?