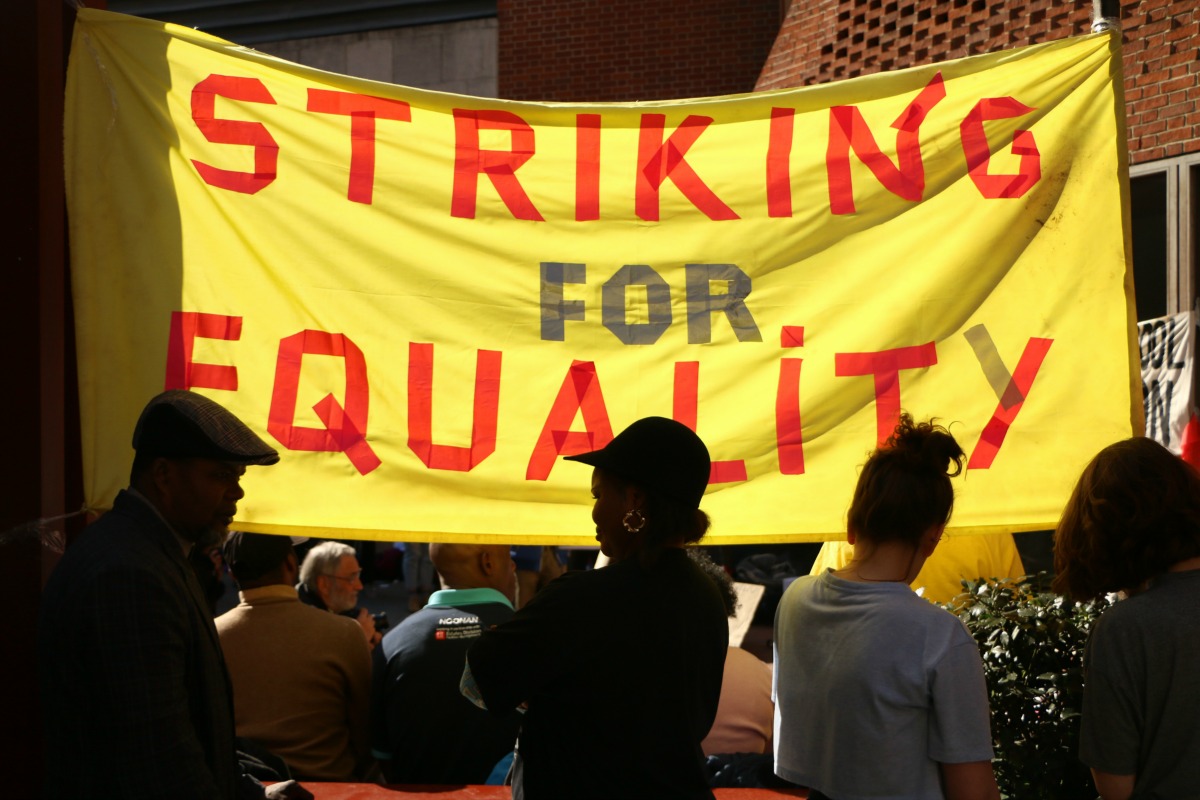 LSE cleaners were on strike last Wednesday and Thursday. Both days, from 6am, campus was alive with cleaners, students and staff demanding LSE treat all members of the university community with dignity.

Between 6am and 9am, striking cleaners and supportive members of the public held a picket outside the main entrance to the Old Building, with breakfast, chants and dancing. From 8:30, several cleaners left the picket for other jobs. For many, a shift at LSE is one of multiple jobs they must hold to survive. The picket then moved to outside Saw Swee Hock. On both strike days, this area was decorated with banners calling for better treatment of LSE cleaners, ringing with music and buzzing with activity.

The cleaners were striking for parity of conditions with in-house workers. This includes parity of sick-pay, maternity/paternity/adoption leave, annual leave, and pension contribution. They are also demanding a review of disciplinary procedures and workloads, and the reinstatement of their unfairly-sacked colleague Alba Pasmino. In an email to staff, LSE distorted the reasons for the strike, claiming it was primarily about pay and receiving the London Living Wage. A more important issue for the cleaners is that of sick-pay – they currently receive statutory sick-pay, a quantity which means cleaners often feel compelled to go into work when unwell. Mildred, a cleaner who injured her leg, has said, “If I get more sick-pay, I would be able to rest my leg, but I can’t afford to lose the money, that’s why I have to come to work with this sickness.” LSE is currently offering cleaners 10 days of occupation sick-pay. In contrast, in-house staff are entitled to their full salary for 6 months and then half their salary for 6 months, if unable to work due to illness.

Throughout both strike days, teach-outs – informal lectures and discussions – were held on the picket. Topics covered included NAFTA, pirates and sick pay, domestic workers’ unions, and outsourcing, run by academics ranging from LSE Anthropology and SOAS Development to Warwick History. There were also bake sales, latin dance sessions, and guest speeches from Sisters Uncut, Movement for Justice and the UoL ‘3 Cosas’ cleaner’s campaign.

Each day, a large rally was held. On the 15th, the crowd marched to 1 Kingsway, where LSE Estates have their offices, accompanied by the SOAS Samba band. They occupied the lobby, demanding Allan Blair, LSE Head of Estates, come and explain why he thought LSE cleaners didn’t deserve the same terms of employment as other staff. After much chanting and salsa dancing, Allan Blair came down and agreed to meet with United Voices of the World (the union that called the strike) for the first time. Lisa Mckenzie, a Fellow in the LSE Sociology Department, was arrested as the crowd was peacefully leaving the building. The rally on the second day was similarly lively. LSE cleaners and Jonathan Bartley, Green Party co-leader, gave speeches expressing their disgust at LSE’s and Noonan’s employment practices.

At 8:30pm on the 15th, in solidarity with the cleaners’ struggle, to emphasise student support and draw attention to LSE’s inaction, a group of students went into occupation of the Vera Anstey suite. At 10pm security sawed through the door and broke into the occupation. They denied students access to toilets and used intimidating behaviour. Concerned for their wellbeing, the group opted to leave at 2am.
One student supporter commented, “[The] campus was brightened for two days and the LSE community came together to demand justice for their cleaners, but it’s important to remember this is only the beginning.”

PrevPreviousBreaking the Pledge: Why is the LSE yet to Divest?
Next‘Predictability And its Limits’ In its Final WeekNext
On Key