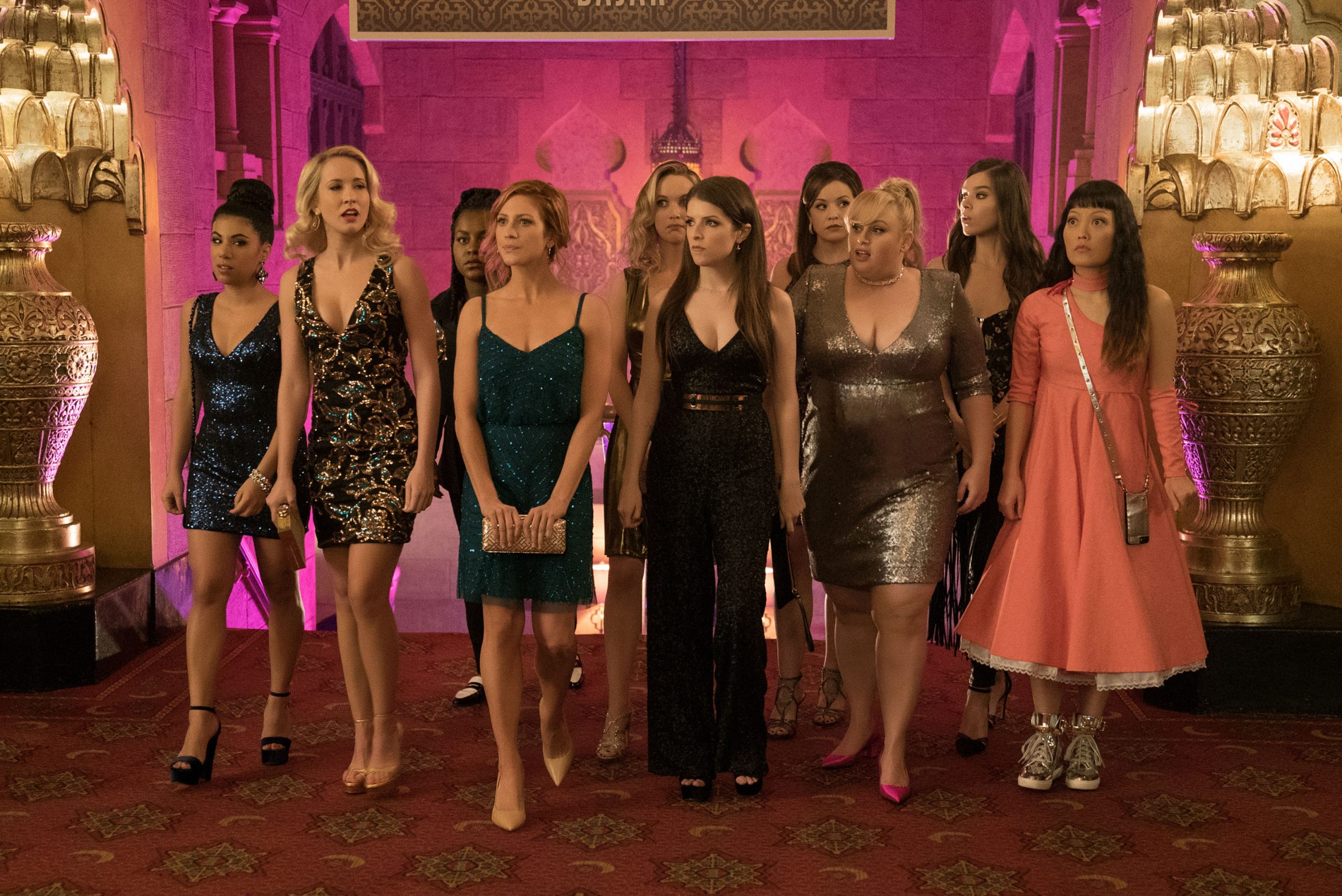 As soon as the Universal Studios vanity card showed up – the jingle was performed a capella, you see – I had a strong feeling that “Pitch Perfect 3” would be a terrible movie. Over the next 93 minutes I never lost that sharp stab of pessimism; if anything, it became septic. Judging by the sentimentality, which leaned on obsessive, and the neatly tied-up, if deeply uninteresting, character arcs, this third will conclude the franchise, which never really moved past its impressive opening number. By the end of “Pitch Perfect 3”, you’ll be happy it’s that way.

A couple of years (?) after the events of the forgettable “Pitch Perfect 2”, Beca (Anna Kendrick) and the Bellas (whose member count seems to grow and shrink as the movie goes on) are living seemingly straightforward lives. Crucially, however, we are told some number of times, these lives are painfully unsatisfying. The group, now in their late-twenties, seek closure in what they’ve always enjoyed most: winning competitions by remixing popular chart hits, without instruments.

As with every film in the series, these sequences are entertaining enough. Sie’s sizeable experience directing music videos, along with 2014’s dance flick “Step Up: All In”, lends some liveliness to the Bellas’ performances, which in “Pitch Perfect 2” fell all too flat.

But it’s in the rest of the movie, the faux-feminist shtick of the band’s internal dynamic and a memorably poor subplot involving Fat Amy (Rebel Wilson) and her father, played by – wait for it – John Lithgow. If you’re not offended by the film’s tedious gender politics, which pats itself on the back for roasting misogyny but indulges in sexist banter (again), I’m sure the waste of the cast’s collective talent will stay with you.

And that’s not to mention the flaunted cultural ignorance, which sees the Bellas travel to Generic Spain and Generic France and Generic Italy without any more specificity whatsoever. Hollywood has long peddled a strange idea of European homogeneity, I just thought that was changing. When Wilson mispronounces Italian pasta names outside the Generic Spanish hotel, confusing the two countries, you see it’s still around. Maybe I would be more forgiving if the scene was funny.

It might not sound like it but I’ve dreaded having to write a bad review of a film, because it doesn’t do justice to the work of the hundreds of skilled, hardworking professionals that make it a reality. (I know that’s wishy-washy, but if you don’t love cinema you don’t write about it.) I’ve had the good fortune of not coming across a film so weak in some time, one which parades its lack of quality and depth while crossing its fingers, hoping to distract a critical eye with Ruby Rose and DJ Khaled.

That’s not to say the evidently talented personnel, onscreen and off, won’t ever utilise their skills elsewhere. It just doesn’t happen in “Pitch Perfect 3”.

PrevPrevious“Molly’s Game” lets a virtuoso screenwriter hold a camera, to generally good effect
Next“Moonlight is a Beautiful Ode to Beauty and Suffering”Next
On Key