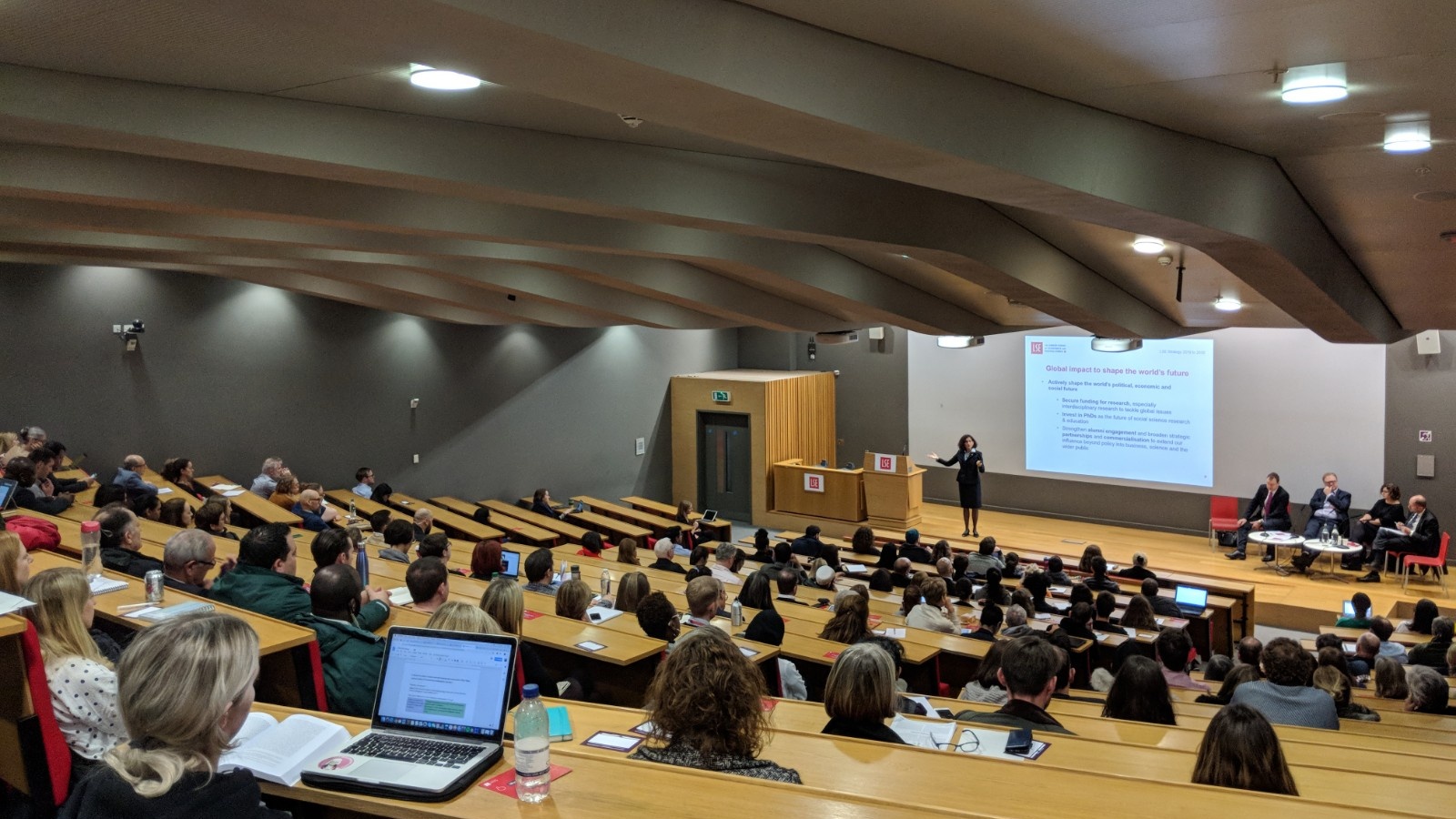 On Friday 2 November, LSE Director Dame Minouche Shafik and members of the School Management Committee hosted a town hall addressing LSE’s 2030 Strategy – set to launch in March of next year. This event was the final in a series of appearances in which Shafik and the board communicated the broad principles and changes that the LSE is set to implement in the following decade leading up to 2030. The school wide event, mostly attended by members of staff, highlighted the main principles behind the upcoming strategy, as well as the practical shape of the changes to be seen. During question time, attendees described the strategy as “ambitious”, “interesting” and “exciting”.

Faced with an increasingly competitive market in Higher Education (HE), and crippling student satisfaction scores, the Director seems to be aiming to establish a culture of change and redevelopment at the LSE. Paired with the current development of new buildings, the strategy is seen by many as potentially game-changing for the university.

The forum was, however, marked with a low student attendance. Putting into question the success of strategies aimed to inform and enthuse the student body about the upcoming changes.

The strategy aims to reassert the LSE’s position among the top universities in the world. With an emphasis on tackling cripplingly low student satisfaction scores, increasing the impact of LSE research and establishing the LSE as an “agora for the world”.

Minouche spoke of capping the LSE student population at 12 000, building a state-of-the-art conference centre in a recently purchased Lincoln’s Inn Field building and improving department regulations to ensure quality across the board, as well as implementing a principle of having “a culture of freedom within a framework”.

At this point in time, the talking points have mainly focused on the principles behind the upcoming changes, with little mention of operational planning and strategies for implementation. This will change in the early months of next year, as the team plans to circulate a document providing a more detailed breakdown of strategy and its operational plans.

The strategy is set to be launched in March 2019. However, the Director expressed worries about the optics and possible attention loss of launching the strategy alongside Brexit, which may push back the time of unveiling.

Minouche opened her exposition with a snapshot of the changing HE Market, the challenges of growing competition in research and education, and the budding online education market.

The school should focus on quality over quantity, Minouche said, as being a big university is no guarantee that a university won’t fail, but being excellent is. To this end, there are plans to cap the student population at 12 000 students (current population is approximately 10 800).

A strategy consultation which yielded 1800 responses from staff, students and other stakeholders, reflected that most respondents believe the current 50/50 split between undergraduates and postgraduates is appropriate, and there are no plans to change that ratio within the framework of the strategy. However, there were mentions of revamping the way the university engages with Phd candidates, by attempting to grow the number of candidates and increase investment in their programmes.

The focus on research impact will demand greater engagement with alumni networks around the world, and increased efforts to fundraise. Throughout the event, the management team and attendees mentioned LSE’s relatively low endowment, with calls to increase it by improving relations and appeals to philanthropy from LSE’s vast – and affluent – alumni network.

The strategy will also focus on diversifying income, to reduce the university’s dependence on tuition fees. This will mainly be achieved through growing professional education programmes and said aim to increase endowments through appeals to philanthropy.

After discussing LSE’s place in the HE world, Dame Minouche spoke of LSE’s notorious problem with low student satisfaction, one of the biggest challenges that the strategy will have to address.

The director said that the LSE should be “disappointed” with current satisfaction and mentioned potential risks of facing penalties by UK HE regulations if student satisfaction scores are not improved.

The director remarked that the educational offer of the school – essentially how, and what we learn – is not that different from when she was a student at LSE 30 years ago, and that the long-term response to crippling student satisfaction will be to modernise this educational offer by being creative and more ambitious.

Due to the highly decentralized organization, the university’s processes are “incredibly cumbersome and complex, and take too much time”, impacting student satisfaction. The new strategy will attempt to impose a culture of “freedom within a framework” so that departments abide by minimum standards in their educational offer. This new way of organizing school operations aims to keep incentivising innovation among departments by keeping a high degree of decentralization, whilst also attempting to order what is now a “messy” way of running a university.

During question time, the director and the attending members of the committee answered queries primarily concerned with the practical implementation of the broad principles Dame Minouche mentioned in her exposition.

Answers ranged from promises of looking into problems, to discussions of plans that are in the making, such as the potential of adding a fourth year to undergraduate programmes to permit more study abroad options, and a range of scholarships to keep improving the LSE’s successful inclusivity programmes.

In the upcoming months, the Director and school authorities will be working on a document outlining the principles and operational planning behind the practical initiatives to come. The document – set to be circulated in January or February – will outline the practical implementation of the 2030 strategy for the upcoming four or five years. The Director will then launch the strategy a few months later.