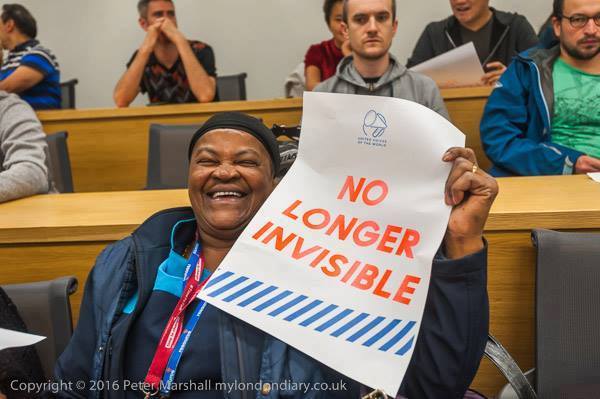 Last week, I attended the open meeting organised by the United Voices of the World (UVW) trade union which was held in support of the LSE Cleaners.  The cleaners are directly employed by Noonan Services Group,  to whom the LSE has outsourced its cleaning  contract. A number of pressing concerns were raised at the meeting, pertaining to a pernicious culture of discrimination and maltreatment, as well as the recent round of redundancies initated by Noonan, which UVW intends to take to both the LSE management and Noonan. Some of you may recall the pivotal role UVW played in the successful reinstatement of the ‘LSE 3’ last year, which befits UVW’s history of organising and pushing for improvements in the working lives of their members.

In fact,  earlier this year, UVW organised what was touted by the media as the longest strike in the city of London, and the longest strike by an entirely migrant workforce in the UK. Migrant workers undertook a record 58 days of strike action at 100, Wood Street, against Thames Cleaning and Support Services, after claiming that over half of their workforce had been fired without justification. The fact that Thames had also refused to pay the cleaners the London Living Wage added fuel to the fire, and the strike only ended when Thames agreed to resolve the issues with the cleaners as well as pay them the minimum wage.

The LSE cleaners are therefore not alone in their struggle for  increased support and recognition of their services in what seems to be a be a spring of uprisings by cleaning staff against corporate giants in London.  Just  last week, the cleaning staff from Virgin Trains said that they may go on strike over fears of losing their jobs. Virgin, like the LSE, has contracted out its cleaning services, but to French multinational Alstom as part of a facilities contract. Alstom, in turn, have subbed the cleaning to Voith Industrial Service, which has proposed to cut dozens of jobs adding up to the equivalent of 37 full-time roles, resulting in a 15% drop in the number of staff according to the Rail, Maritime and Transport Union.

More deeply-rooted problems such as the poor treatment of cleaning staff also seem to be an issue across the board and are symptomatic of a wider management and contract outsourcing katzenjammer. A rail union spokesman recently stated that the cleaning staff on Virgin West Coast trains, which include the Liverpool to London route, are “treated like dirt”, and  described, “…the nightmare, complex world of contractors and sub-contractors” which cleaning staff employed within the private sector have to put up with.

But what legal measures are open to employees who feel wronged by these conglomerates, especially in cases where the terms of their employment restrict them from taking class action? Well, Hillary Clinton (of all people!) may have an answer to that. By the time this goes to print, Clinton will have revealed her plan to curb mandatory arbitration clauses that require consumers, employees and other individuals to resolve legal disputes in private arbitration proceedings instead of in courts. If elected on November 8th, the Democratic nominee will make it easier for claims to be pursued on behalf of a class of similarly siuated individuals as opposed to on an individual basis, as the latter makes it extortionately expensive to take legal action.

Clinton is expected to target Wells Fargo specifically during her scheduled speech in Ohio, as the bank’s employees notoriously opened as many as 2 million checking, savings and credit card accounts without their customers’ permission in order to meet sales quotas. Earlier this month, Wells Fargo reached a $190 million settlement with federal regulators to settle their customer fraud dispute, with the Consumer Financial Protection Bureau receiving an unprecedented $100 million of the total sum, in the largest fine ever levied by the agency.

Bringing these issues full circle, I recently came across a poem published by UVW on social media about the plight of the LSE cleaners which I particularly enjoyed. So until next week, I shall leave you with this as food for thought.

“We are not the dirt we clean,

We have standards, They are mean,

They are wrong, We are right,

We are many, They are few,

They are wrong in what they do,

We’re ready to stand and fight,

We love justice, They love gold,

They are cowards, We are bold,

Victory is in our sight,

Listen to the words we say,

Cleaners of the world unite!”