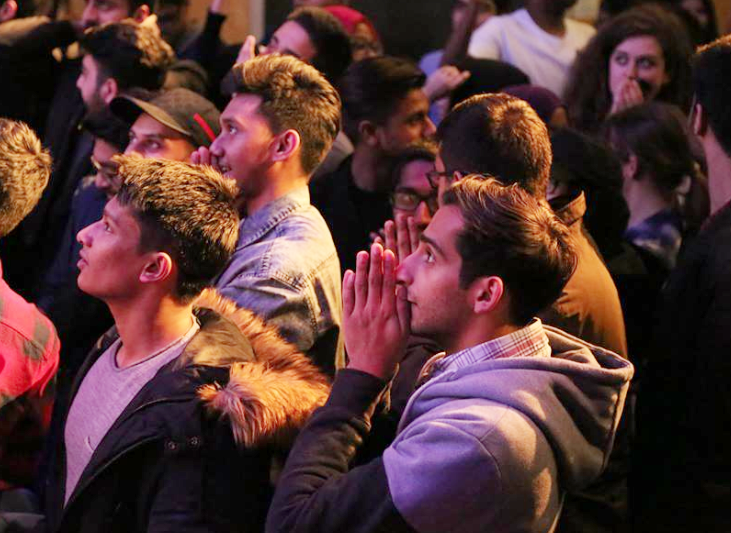 It started well. I must admit that it did start well. The screens were blaring, the coffee had been chugged, the power naps were had and the vibes were good.There were hot dogs. Being the inclusive liberals we are, there were even vegetarian hotdogs. This was promising. Tuns was bustling out with over-enthusiastic politics students, clambering over one another in a desperate attempt to wrap their clammy fingers around as snakebite from behind the bar. It was like a political Saucy on speed. The chairs were packed, the floor was rammed and it was a physical impossibility to get closer than 10 metres from the screen. A french friend described how he felt like a “tuna in its box”, which I believe was a rather charming attempt at “packed like a sardine”. He captured the essence, either way.

The mood was genuinely hopeful and I admit that I was tentatively optimistic that Donald Trump and his toupee wouldn’t be moving to the Oval Office. I shut out the whispers of “Brexit” which echoed around the walls like when Harry Potter keeps hearing Voldemort’s voice in his head and goes really pale and sweaty and his eyes go big and he shakes his head a lot. No, I said. It shall not be.

Despite my optimism, it went down hill quickly. It became apparent early on that this was not going to plan; Trump’s numbers soared and Clinton’s stagnated. Some friends took this development more seriously than others. One meticulously noted down every number that popped on the screen and used real life maths, of which I have little to no understanding, to predict the election result. He started optimistically and his logic was a source of comfort to the rest of our hysterical, snake-bitten minds. “Ben’s not worried”, I would brag to those less certain than I, “Ben knows all the numbers.”
The turning point came around two hours in, when I attempted to assure yet another nervous spectator that Ben’s numerical numbers would numerically sort us all out. But rather than nodding and giving me those don’t-worry-I-gotcha eyes, Ben looked guilty, unsure, even afraid. Ben looked at me the way your dog looks at you when he’s just shat on your carpet and you’re about to find out. Ben’s numbers were no longer good. I’m not sure why we relied so heavily on numbers and statistics; with Trump leading the count it was evident that logic and rationality had long gone out of the window.

Yet we clung on. For what do you do when a racist, sexist, homophobic, demagogic bigot is about to become the most powerful person in the world? You drink. We’d shared the videos on Facebook, we’d tweeted to all of our 78 followers a heartfelt “please America” plea, we’d had the “listen I don’t like Hillary either but” conversation with our neighbour even though they’re from North West England and have no say in the election either. Goddammit, we had tried. Now we had to sit back and watch it all unfold.

When 6am rolled around, I took in my surroundings. Tuns, normally a giant in the London social scene, had fallen. The remaining few enthusiasts were mainly sprawled out on the floor, half asleep in a pool of their own luke-warm pints. Some cried into their ‘I’m With Her’ T-shirts, some staggered around, slurring anti-Trump slogans as they knocked, droopy eyed, into one another. The floor was sticky, the atmosphere apocalyptic.

I lost a lot of faith in humanity that night, but in the morning, I got a little of it back. Protests had erupted overnight and in shows of global solidarity, people had vowed to work together and unite against Trump’s toxicity. There were videos of kids singing songs of love and togetherness, people holding hands with strangers to say they would not lie down under a leadership of hate. The Three Tuns may have crumbled into misery that night, but LSE won’t. Trump’s divisive and degrading politics won’t reach the confines of our proudly multi-cultural community, and lets be honest, we’ll probably churn out the next set of world leaders anyway. So let’s not be deflated, let’s mobilise – pint in one hand, two fingers up with the other.

NextHalloween – The Rise and Fall of Molly’s PrinciplesNext
On Key