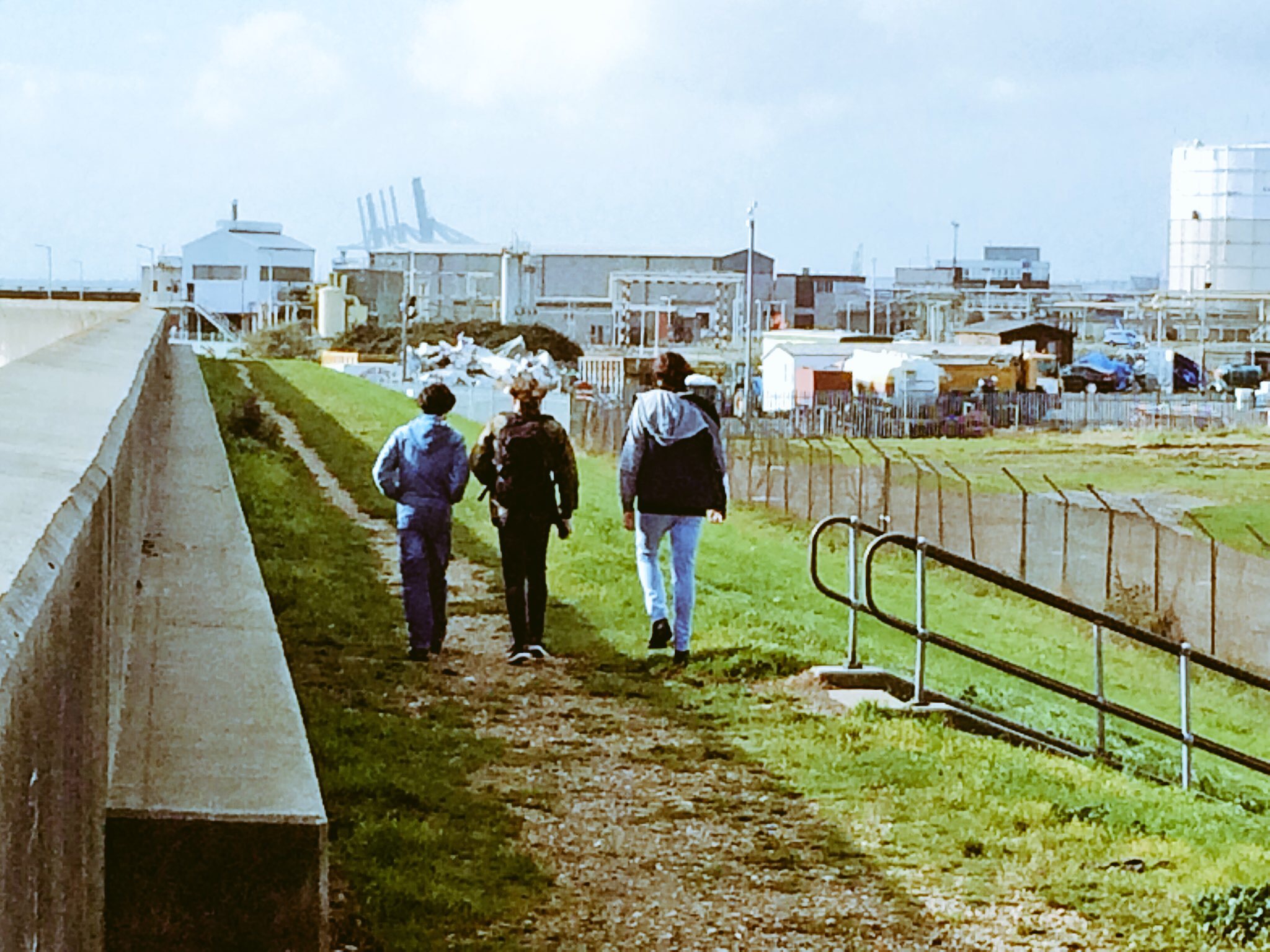 Canvey Island, a small islet off the coast of Essex, wants to break away from Castle Point Borough Council. It’s a community of seven square miles and only 38,000 people, and yet this week the plight of the Canvey people attracted the attention of the British, Parisian, Spanish and Russian press. The locals have been taken somewhat aback, many think it’s “ridiculous”.

The commotion started last Monday, when the Times reported that David Blackwell, 70, leader of the CIIP (Canvey Island Independents Party), was taking inspiration from Catalonia in his fight to take back control. “It is time for us to start a move for proper independence, like the Catalonians, and we must begin with a petition.” A lover of localism, I was intrigued, and so made my way to the island to speak to Blackwell.

Separated from the mainland only by a series of creeks, at first glance Canvey is much like other Essex towns. With a population of 300 at the turn of the last century, Canvey grew rapidly in the fifties and sixties to cater for diaspora from London’s East End. Local pie shops sell jellied eels and in a Costa Coffee on Furtherwick Road, which the Standard generously compared to Barcelona’s Las Ramblas, Blackwell, who everyone calls Dave, tells me residents have an “Old East End mentality”.

“Everyone mucks in when something goes wrong,” he tells me. This may have something to do with all the floods Canvey has had to weather. Reclaimed from the Thames Estuary by the Dutch in the 17th century; Dave was six years old during the great Canvey flood of 1953, which caused the deaths of 53 people. Blackwell’s father, a local firefighter, was involved in the rescue efforts. Dave himself was rescued by the army.

The island also experienced floods in 2013 and 2014. Blackwell tells me residents were told the first was a one-in-700-year flood, and the second a one-in-300-year flood, so hopefully Canvey won’t flood again for another thousand years. A retired horticulturalist, Dave has green fingers. He thinks climate change caused the recent floods, and fears the island’s defences can’t cope. He recalls that during the last flood, the Environment Agency couldn’t get on the island to help because the drainage pipes were blocked.

Dave blames the Borough planning committee. Blackwell is against any more houses being built on Canvey, but the CIIP are routinely outvoted by Conservatives on the mainland. He thinks the “infrastructure has got to go first” and that it’s not fair that most of the new housing goes to East Enders rather than local young people.

The CIIP’s most recent campaign has been to protect the Paddocks community centre from development, but their power is restricted by what Dave sees as rigged electoral boundaries. Castle Point only has around 3,000 more residents on the mainland than on Canvey, and yet the mainland has 7 more councillors. The CIIP’s initial aim is to petition the Boundaries Commission to equalise the number of councillors.

It’s at this point in the conversation that I realise that for all the media hype, this is a story more suited for the Basildon Echo than the Beaver, but every time I ask Dave about national politics, he swiftly moves the conservation back to Canvey. Blackwell was once deputy leader of Castle Point as a Labour councillor before the party lost control of the borough in 2003. Even then he says he “wasn’t interested in politics, I just wanted to make a change.” His proudest achievements from that time are planting more trees on the island and getting Canvey Wick designated as a site of special scientific interest.

When I ask Dave why Labour declined in Essex, he blames “national politics.” He gives the example of New Labour’s private finance initiatives, and a local high school built for £25million that’s going to end up costing local taxpayers £200million. He’s not a fan of austerity, and thinks everything is being “gradually run down” and that a cut of 600 of the number of police in Essex is reckless. He’s not a radical leftist however, and think’s Jeremy Corbyn just says “what everyone wants to hear” and that his nationalisation program isn’t practical.

Though, along with 73% of Castle Point, he voted to leave the European Union, he doesn’t think Brexit is going well. “It’s a mess – the government are just trying to put on a good face” he says, though he fears that May’s successor, when she’s inevitably deposed, will be even worse.

Dave thinks that although some people in the area voted for Brexit because of immigration, anti-immigration sentiment gets a bit overblown in the national media. For one thing, he says “there aren’t any immigrants in Canvey”. He thinks people voted to leave because the EU burdens the UK with too many rules and regulations. Returning to his green roots, Dave gave the EU ban on neonicotinoids (a pesticide that protects bees) among his reasons for Brexit. Canvey has a proud history of environmentalism; residents successfully fought the construction of two oil refineries on the island in the seventies: they say this was the first time in this country local people won against multinational oil corporations.

Of course, not everyone voted to leave out of concern for the future of life on Earth. Though Canvey residents are staunchly proud of their local patch, Castle Point is also the district with the highest number of residents describing themselves as “English” in the country. The island is where Nigel Farage kicked off his 2015 election campaign, with the slogan “Believe in Britain”. A number of CIIP councillors were photographed with Farage, and during the 2015 elections the CIIP entered into an electoral pact with UKIP to try and take control of Castle Point.

When I talk to Blackwell about the pact he says this was more out of necessity than anything else. The independents feared that residents buoyed by the national UKIP campaign, would vote UKIP locally too, splitting the CIIP vote and letting the Conservatives back in on the island. In 2016, UKIP broke the pact, but although they came close, the CIIP managed to keep hold of their seats: 9 out of 11 on the town council, 15 out of 17 of the island’s borough councillors, and both of the island’s county councillors, of which Blackwell is one.

Their success in council elections means that Blackwell tells me 90% of local people would vote to leave Castle Point if they had the chance. This must have been a conservative estimate: he’d earlier told the Sun 100% would vote for secession.

We finish by talking about Catalonia. Dave seems a bit taken aback himself that the “tongue-in-cheek” comment he made was picked up internationally. He says he shares the desire of the Catalan people to be able to “determine our own future,” though he says he’d love to just have the level of devolution the Catalonians have got already. Dave says it’s impossible for islanders to be able to change things at the ballot box, because of the way the distribution of electoral wards is rigged against Canvey. “The Boundary Commission dictate that,” an institution that has come to play the role of Spain’s constitutional court in municipal England.

We part ways, with Dave recommending I visit the Labworth Café on the seafront, a grade II listed building designed the resemble the bridge of the Queen Mary by the same man who designed the Sydney Opera House. Next to the funfair, which is unfortunately closed, it looks nice enough, though I honestly can’t see what all the fuss is about. I continue along the sea wall around Thorney Bay to the caravan park next to a defunct degassing station.

I spot a local fisherman and think to myself that I should probably go interview him, but I’m a bit shy and not very good at this journalism lark. I comfort myself with the knowledge that I can always resort to making up quotes if I have to, like Boris Johnson when he was a journalist. I pluck up the courage to talk to a woman who walks past, but she’s only recently moved to the caravan park, doesn’t really know anything about the CIIP, and the exchange is quite awkward. I walk back towards the Labworth but the wind picks up and it starts raining so I try to hide behind the sea wall.

Back at the Labworth and I ask two men their opinion, but they live in London and are up in Canvey to look at cars. I return to the centre of town and buy a Coke in the Post Office to give me an excuse to talk to the woman working there. She says she doesn’t vote, but thinks independence for Canvey is a good idea because it might reduce council tax. “It won’t ever happen though – just like Brexit.”

At the fruit and veg stall a man tells me he thinks Canvey having two councils, at borough and town level, for one little island is “ridiculous”. He likes Dave Blackwell, he thinks he’s a “people person.” Everyone at the stall dislikes the foreign media descending on to the island. I get the strangest feeling I might not be wanted, so I head back home.

Back in London, I ring up one of the island’s only Conservative councillors, Ray Howard, who next year will have been a local councillor for 50 years, and was in the original Canvey Island borough council before it was merged into Castle Point in 1974, to ask why he’s against independence. He said that he misses the power they had locally before 1974, and “would love Canvey to be on its own”, but that in the real world “local government is getting larger” and not smaller.

Howard thinks that “the days of Castle Point are numbered,” and that it could be merged with places like Rochford and Southend, and possibly even Basildon, rather than broken up. He says the council leaders are already meeting and “working closely on strategic matters.” A small council of 38,000, he says, simply could not operate. He is however, more amenable to Canvey having more borough councillors, especially in his ward, where only two councillors have to deal with “Calor gas, the sewage works, the caravan park and a population almost as high as Canvey’s other wards”.

Howard may well be right, but so many residents in Canvey seem put out by technocracy. Part of the reason the CIIP is so popular is because everyone seems to dislike national politicians. Blackwell describes CIIP councillors as “community councillors at the grassroots.” Its positive parochialism; local people care about their patch and know the changes that would be best for their area, but national politicians don’t seem to give a toss. When local councillors went to the Environment minister to lobby for more flood protection, Blackwell said the minister had a photoshoot with them and then handed them over to a researcher. Dave believes politicians don’t “live in the real world,” and that there’s no substance to them. I reflect that at a national level, this kind of sentiment might be called populism, but at a local level it just seems like plain old common sense.