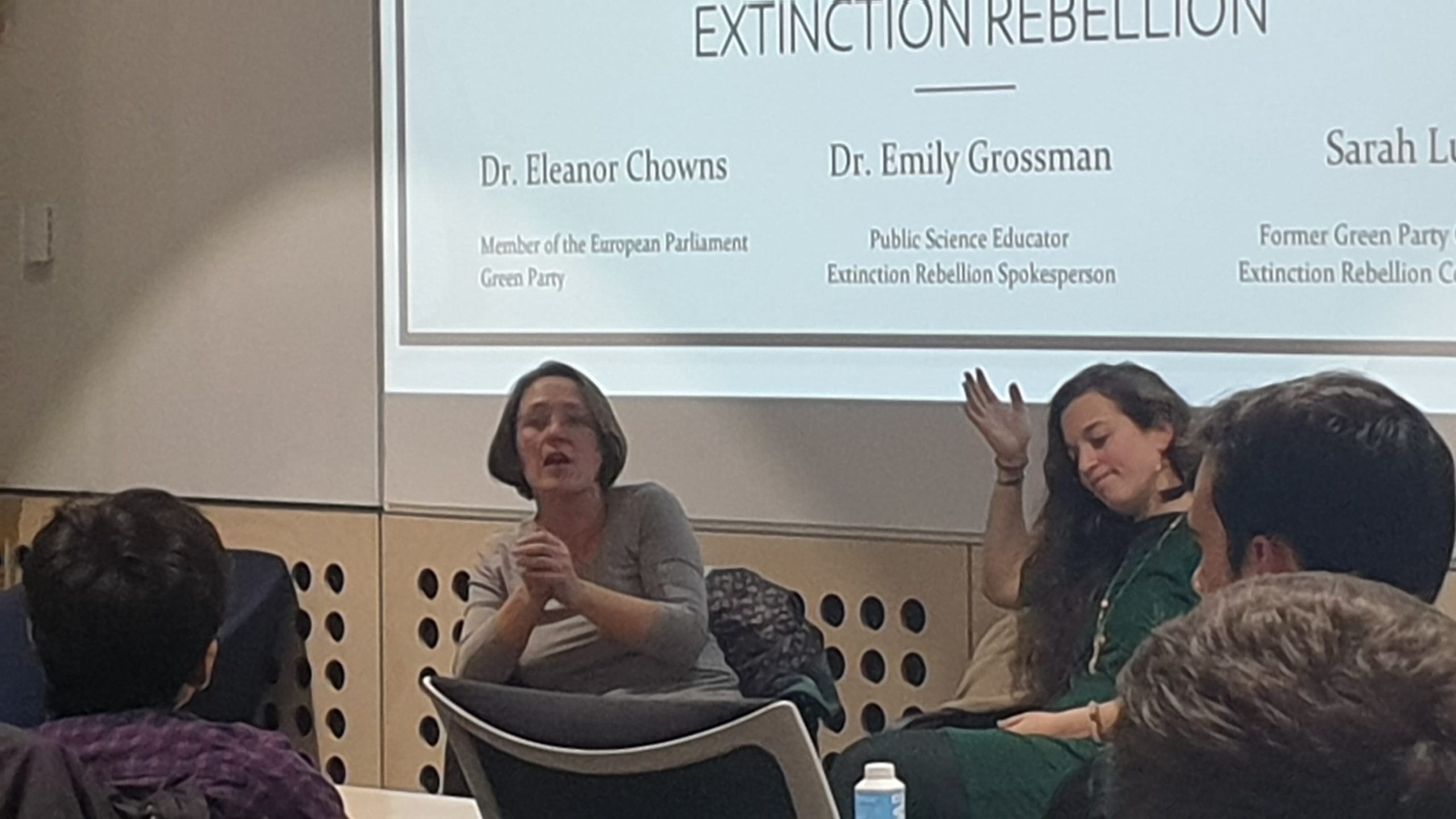 Explanation Rebellion: the Art of Debate

What happens when one hosts a debate where all participants are largely united in belief, politics and purpose? On Thursday the 5th of December the LSE found out…

The LSE Debate Society’s Fabian series undertook a shift from its head to head Brexit debate earlier during Michaelmas Term. This latest debate centred around the statement ‘Extinction Rebellion has done more harm than good’. The three participants in the debate were Dr. Eleanor Chowns, a Green Party Member of the European Parliament, Dr. Emily Grossman, a Public Science Educator and Extinction Rebellion (XR) spokesperson, and Sarah Lunnon, a former Green Party councillor and XR coordinator.

I must congratulate chair Hamza Choudry on his ability to push each of the participants to expand upon their defences of XR. Unlike in the aforementioned Brexit debate, Hamza played less of the role of the boxing referee, pulling the combatants apart when the blows became too wild and pressing them back into action. Instead, he was more like a Cluedo detective, trying to pinpoint the intellectual killer blows. For this reason, the debate took the form of an ‘explanation rebellion’, with each of the participants pushing back against Hamza’s inquiries, attempting to rally the LSE audience to their own cause through science.

These personal rebellions can be taken in two ways: as a demonstration of the powerful personalities within XR and the Green movement, or as a demonstration of the divisions within this supposedly united group. Divisions are present in any political grouping. The right and left sides of the present cultural-political landscape seem to come with their own inherent structural problems. Yet, the desire for ideological consistency seems to be a uniting theme for both.

Just as with the Brexit debate analysis previously published, I will analyse three frames from this debate each from the lens of the central debate prompt; that being the assertion that ‘Extinction Rebellion has done more harm than good’.

Extinction Rebellion is not a political movement:

The first frame we shall analyse is that of XR not being a political movement.

Hamza: (On scientists) some people say that some people politicize this epistemic community. Do you not think that the scientists have been politicized by Extinction Rebellion?

Chowns: [This is a] somewhat crafted distinction that politics is just about political parties. Politics is about how resources are divided up; how to operate collectively.

Lunnon makes an unforced error here. There is no need to make far-flung statements about Extinction Rebellion “modelling a new way of being”. She already had the crowd on her side. Indeed, her assertion solicited laughter from a large proportion of the audience, many of whom presumably believe in her cause. It would possibly have been easier to argue this point five years ago, when green activism was less prevalent within political discourse. However, the nature of XR’s activism, with groups spray-painting the treasury with red paint, chaining themselves to Jeremy Corby’s front fence and gluing themselves to Lib Dem battle buses, suggests otherwise. Chowns comes out as the far more sensible participant in highlighting that politics is about “how resources are divided up; how to operate collectively”, as opposed to a lesser function of life that is dwarfed by some ethereal notion of green transcendence.

In response to Hamza’s question contrasting the relatively privileged position many XR activists enjoy with the persecution faced by climate activists around the world, Dr. Grossman answers:

Grossman: we have seen the death of environmentalists internationally, for example in Brazil. To act in this country you are able to do so in a relatively safe environment. My feelings are, as a middle-class white woman, I am able to take action because I have the power to do so.

This seems a reasonable defence against the supposed notion that there is a sense of ‘entitlement’ within Extinction Rebellion. However, this moment illustrated the first chinks in the armour of our participants, and Grossman in particular. Head shakes and slight tuts could be heard. In politics, interlinked and complex systems can often be reduced to symbols. To some, November’s XR activist standing on top of a tube train holding up a crowd of frustrated commuters has come to stand as one of the negative symbols of the XR debate. In a game of word association, what Grossman must desire would be for Extinction Rebellion to be associated with ‘life-saving’ and ‘vital’. However, as is evident here, they risk veering off dangerously to ‘Guardian’ and ‘cappuccino’.

One can make the case that Grossman’s ‘empowerment’ frame defends her argument well. However, this poses the question: if our nation is so good at allowing these activists to stand up for their beliefs, where is the hegemonic political-police structure opposing them?

The final frame concerns the notion that Extinction Rebellion’s aims lack realism and practicality. Dr Chowns responds to this:

Chowns: We have a citizens’ assembly. It’s acting under the auspices of six select committees. It’s being organized by sortition. It’s the first time it has been organized in a very long time I think that’s going to be a very interesting problem to see what comes out of it. Politics is a continuous process… you [Hamza] spoke about ‘these are the solutions’. In a way that is why I’m interested in the solution as opposed to the problem. I got elected with 80% of the vote as people like voting Green when they see what Greens do. That gives me hope.

Chowns has defended her case well. Facts, solid structure, and a potent optimism have all dissuaded me from poking too deeply into the avowed benefits of Extinction Rebellion’s proposed ‘citizens’ assembly’. This after all is a Comment section about language; its power, subtleties and manipulation. To see a winning frame first-hand is akin to observing a beautiful painting, or eating a delicious meal. ‘The Art of Debate’ is not only about learning from the mistakes of those who fail to grasp the power of the frame, but also the capabilities of those who do. Our world may wither and die, but one thing that will reign immortal is the power of language.