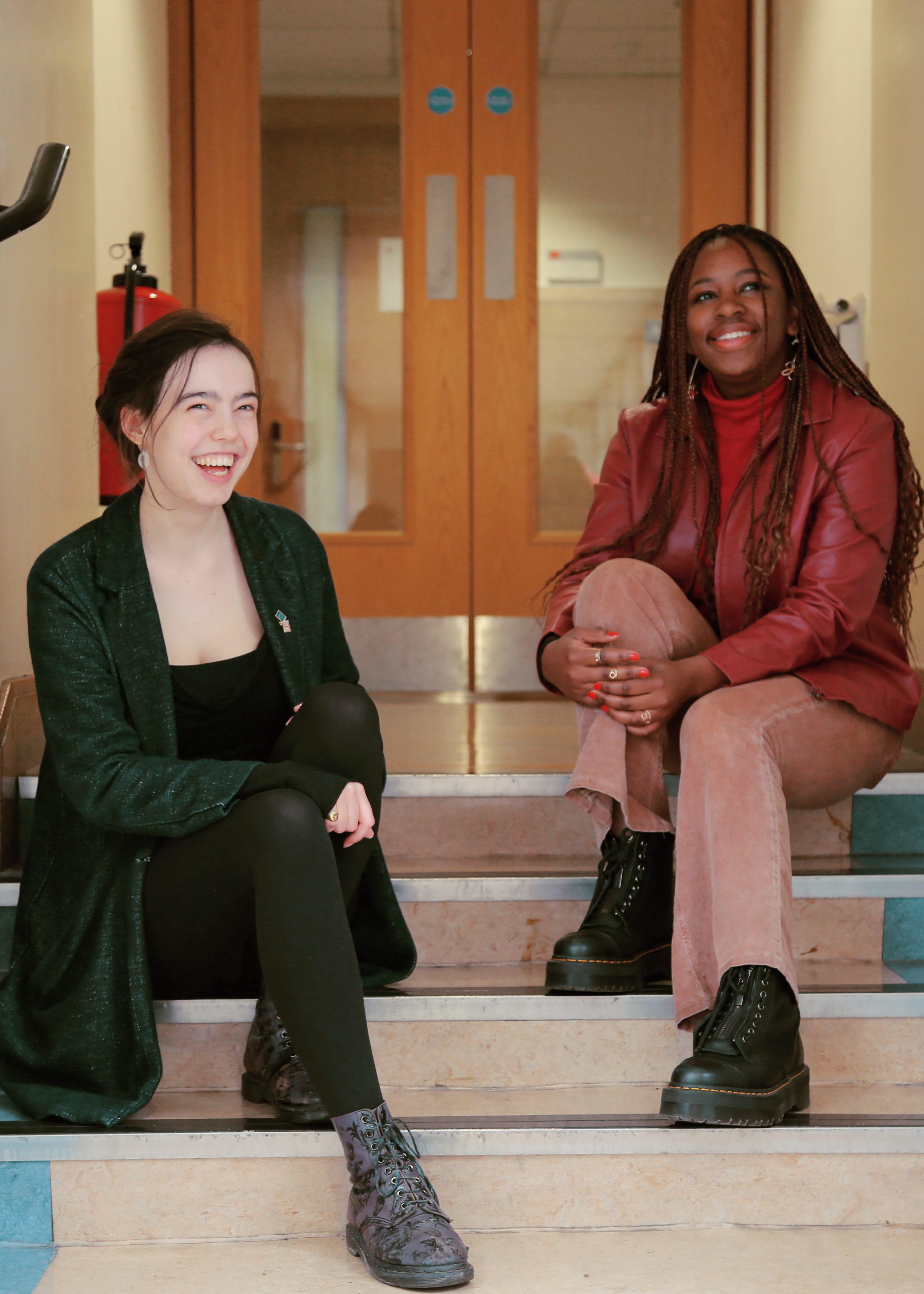 I chose Fikayo and Ella for this special FLIPSIDE sex issue because no one speaks on the topic better than feminists. They are both at the head of their respective societies, Intersectional Feminist Society (iFemSoc) and Women in Politics (WiP). To be sure, sex is not sexism, but sexism is imbued in how we think about it. I wanted to speak with people who recognise this, and would have the range to unpack it.

Anyway, sex: are LSE students having enough of it?

From a casual glance at LSELove, it seems to be more of a problem for the men on campus. Fikayo thinks “it’s just a very small pool” but thinks this is mitigated by the fact of living in London, which “means you’re not exactly limited to LSE all the time anyway”.

Ella says the bigger looming issue is that students “aren’t really willing to consider that they need to be educated about consent, that there might be things that they don’t know about sex and about how to talk to your partner.” It’s a type of arrogance all too common amongst LSE students – an arrogance hardly limited to sex. Fikayo recalls her time in halls when one guy walked out of a consent talk because he thought that consent “ruined the mood,” to which Ella asks “What’s not sexy about being asked, What do you like? Is this okay? Do you want to take a break?” As Ella says, It’s about feeling “safe and in control” giving consent is essential in how we “establish that baseline”. Fikayo adds that it’s also a “matter of respect for the person”.

Porn, let’s face it, is more problematic than it is good. Fikayo says “it just like gives out these [false] ideas about what sex is like and what bodies should look like. So you see a very certain kind of body and a very certain way to have sex; you kind of forget that there’s a whole spectrum out there.” She feels what is missing from our discussions on sex is a lack of recognition that “anyone who isn’t a cis-hetero white male experiences and navigates those kinds of things very differently because there’s so many different things to consider with layered identities. The way I navigate sex and dating as a heterosexual black woman is so different from the way that a queer Hispanic woman would.”

So what’s the one bit of sex advice they would give to LSE students? For Ella it’s “even if you’re in a relationship, sexual preferences might change; checking in with that person… really helps. Those conversations can be very fun and very freeing.” Fikayo highlights how important it is to “own up to your shit. Be accountable, and recognise when you’re in the wrong in terms of consent so you make sure that your actions aren’t going to completely screw someone over.”

Ella and Fikayo, like many of us, belong to the “HSPS [Human Social and Political Sciences] reject club”. For them, it’s a blessing to have been rejected – they’re glad to be at LSE and in London. Ella is in the third year of her Government degree and Fikayo is a second-year studying Sociology. Ella thinks “LSE as an institution is very flawed in lots of respects but nothing beats living in London, especially being involved in politics. The exposure you get to so many politicians – unmissable.” Fikayo adds  “I have an entire module on race, and I would literally have never had it at Cambridge.”

On the topic of LSE’s flaws, Ella has spent most of this academic year leading the Hands Off LSE campaign. She says, “our efforts were very much focused on having this informational week generally to raise awareness of the issue of sexual violence, but it’s also specifically within universities and on campus. And as we were preparing for that, we thought it would be really good to collate some resources about what support is available at LSE in case anyone needs to access support and doesn’t know how to do it. But as we were looking into that, more and more, we realised that these provisions are actually incredibly inadequate.”

Before the Hands Off LSE week had even taken place they’d already decided they would launch a campaign afterwards. “People hear a lot of statistics about sexual violence and everyday circumstances but don’t think about how it relates to the university. I had a lot of people who were shocked to find out the number of assaults that take place on university campuses… Now we’re still looking to set up various events this term; it’s become a bit more behind the scenes. We’ve been meeting a lot with the LSE management and Directorate, which has been an interesting experience. We’ve received a lot of positive, enthusiastic ‘yes, we have several working groups looking at this issue’. Just this morning we received a response to our demands, and they’re very half-hearted. They are not time-specific. They are a bit of a wash. There’s still a lot of work to be done.”

As for Fikayo, she’s had the “quite difficult” task of bringing iFemSoc back from the dead. She says they “basically started the society from scratch, because we didn’t have any money, we didn’t really have any kind of connections, anything. So it was very going back to basics: restructuring the society, getting new people and trying to expand our network. I think because we’re starting small it’s been difficult to have a more tangible impact with campaigning because there’s still so much work to do.”

“What we’ve really tried to do is put an emphasis on building an intersectional community. We’ve had a cocktail event for Black girls; that was incredible that because a lot of the girls they said they’d never seen that many Black girls on campus before. It was crazy to think that LSE had created this atmosphere where it’s difficult to kind of connect to other people who look like you.” They plan on expanding these types of events to other groups of women: “it’s just a matter of finding where we can kind of collaborate because we don’t want to speak over people. It was easy for me to make an event for Black girls because I kind of know as a Black woman what other women want. Ideally, we’d reach out to other groups like Islamic Society and collaborate with them so that it’s more representative – not just imposing what we think that people need.”

The gap between what people need and what we think people need appears across social science. In the case of sex closing this gap means a better time for everyone involved instead of just one person. Fikayo and Ella show that closing the gap is possible through good and honest communication.