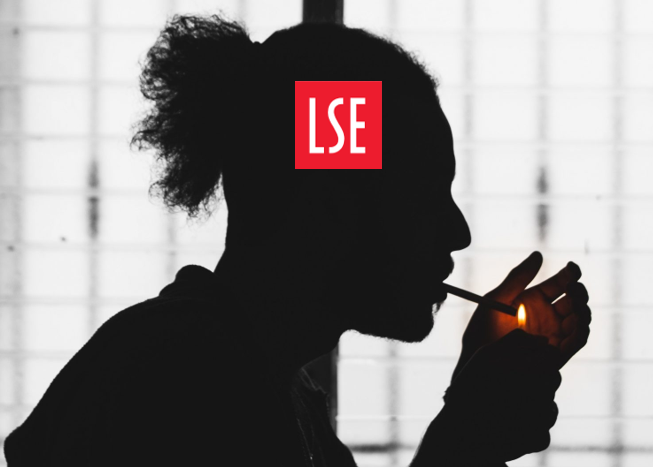 Green Beast: LSE Should Stigmatise, Not Normalise Marijuana Use

What should we think about when we consider legalising cannabis?

One sultry summer afternoon in the middle of 2017, I sat on the edge of Oxford’s Thames River stretch smoking weed with some friends. They were kayakers who both had ambitions of racing in the 2020 Japan Olympics. That was until their discipline decreased and their ‘seshes’ rose. As we sat back against the boardwalk, passing our joint between us, other crew members of the Oxford Kayak Club sped past us along the river, noticing us with disapproving stares. My friends had taken a day off from kayaking. They will now not be competing in the Olympics. Of the others, racing along the Thames, some would go on to represent Britain in kayaking. If there is anything that captures the lethargy and lack of drive marijuana brings it has to be that image: of three boats, racing ceaselessly along the river, far away from all of us, vanishing like my friends’ futures and ambitions in a puff of green smoke.

I have had the fortune of connecting with a lot of people, and this was often accomplished via smoking weed. What one quickly learns through developed friendships, with dealers, ‘connoisseurs’ of the drug and those just starting out, is that a pattern often develops. One hesitant towards weed tries the drug then becomes a regular stoner, painfully rallying off the long list of pro-legalisation arguments each time you join for a sesh. The same friend tries nitrous oxide for the first time, or acid, or ecstasy. Or, in the case of a friend I knew from primary school, the pattern stops abruptly. After taking two tabs of pink ecstasy containing ten times the usual dosage level of MDMA, my friend died at the age of fifteen.

As political trends increasingly point towards the apparent need for greater legalisation of marijuana, the question arises: what society can we envisage structured around this drug? British society has long been structured around alcohol, often too strongly, as many argue. But alcohol is a social drug, whilst marijuana is not. Connecting over smoke-induced introversion is a far cry from something that makes one feel open and free from inhibitions to a sensible degree (if not taken to excess). From someone who used to smoke regularly, and has not done now for two years: there are no creative benefits to cannabis. You’re just high.

It is a sombre thing, now, to hear old friends, who cannot eat without lighting up because ‘food tastes so good when you’re stoned’, regale me with points about why marijuana is not addictive. The same goes for catching up with people who, it becomes clear by interacting with them, have quite clearly been sent to Stranger Things’ ‘upside-down’ realm due to the drug; testament to the fact the drug often leads to paranoia and psychosis amongst its users. Or reading about the case of Grace Spence Green, who lost the ability to move her legs after Amsumana Sillah Trawally fell on her from a great height, in turn shattering her body, after being under the influence of marijuana. Those who argue that marijuana cannot have such a temporary effects are missing the point: the cumulative psychological and social result of decreased motivation, coupled with increased dissociation from reality can lead to extremely harmful results, which, in Trawally’s case, entailed mental illness. Such cases are just the start. During June 2019 the NHS opened Britain’s first clinic for cannabis psychosis. There will be more of such clinics to come.

This is why the LSE SU’s ‘not anti-drugs‘ campaign fills me with such unease, alongside the general consensus present across campus that legalisation must occur. Both represent an era of increasingly liberal attitudes to drugs. As society shifts, the same friends who worried about smelling of weed when going back to their homes in 2015 will on average feel less pressure doing so now, as their parents will be more likely to smoke too. As we move full-steam ahead to legalization, the question should not just be about ‘pro’ and ‘con’ arguments, but about the construction of society itself. You don’t stop doing drugs by normalizing drugs. You stop doing drugs by not doing drugs. Far from a harmless plant, marijuana is a green beast. It should not be legalised, only criminalised further.