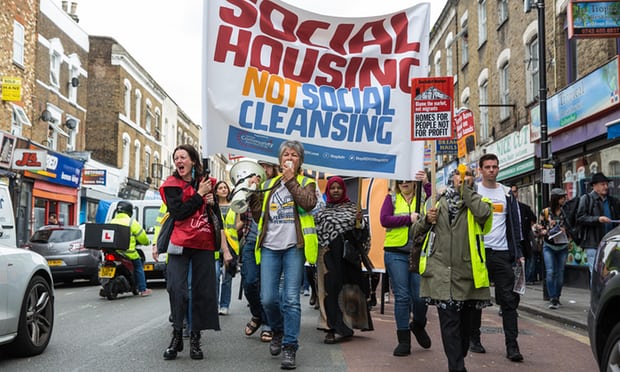 [vc_row][vc_column][vc_column_text]Labour party infighting and local opposition to the proposed Haringey Development Vehicle (HDV) has led to council leader Claire Kober announcing she will resign in May. With the next council leader likely to be a member of anti-HDV Momentum the project, which has caught national attention, looks likely to be scrapped.

The HDV is a plan put forward by Kober’s administration to enter a 50:50 deal with private developer Lendlease to build 6,500 new homes in the borough. But in the wake of the Carillion PFI scandal many in the Labour party are sceptical of public-private partnerships, and think HDV would be a bad deal for taxpayers. Those living on estates earmarked for development are split. Some worry that the council’s guarantees for a right of return on “equivalent terms” aren’t airtight, and that the project represents “social cleansing” by the backdoor, while others, living in cramped and dilapidated accommodation hope that the development will provide more homes, better suited to their needs.

Kober, leader of the Council since 2008, and chair of London Councils since 2016, succeeded George Meehan, who stood down in the wake of the death of Baby P. Baby P was the regular victim of child abuse. Haringey child protection saw him regularly but failed to intervene. Kober has been credited with transforming Haringey’s reputation, improving child services and bringing investment to the borough.

The Council say that a public-private partnership is the only way they can build the homes that Haringey needs as its population grows in the midst of the housing crisis. Government spending cuts have disproportionally hit local authorities since 2010 and government rules prohibit the council from borrowing more than £50m for housing. On top of this more council houses are being sold through Right to Buy, than are being built. The HDV would, the Council says, give Haringey the capital to develop its large and underused land assets, while also, by putting council housing into a 50:50 public-private vehicle, strip residents of the Right to Buy, thus allowing the borough to retain its social housing stock. The council also estimates HDV will provide 6,400 new homes and create up to 20,000 new jobs. They deny claims of social cleansing, stressing that residents will have a guaranteed right to return to their original estate once it is redeveloped.[/vc_toggle][/vc_column][/vc_row][vc_row][vc_column][vc_column_text]Kober says she stood down because of the sexist bullying she was subjected to by Momentum members, saying it would be “utterly inconceivable” that she, Labour’s most senior woman in local government, would be branded as incompetent if she were a man. At London Young Labour’s AGM LSE undergraduate student Rania Ramli criticised activists who booed her because she didn’t know the policy details of the HDV. She lost out in the race for chair to the Momentum-backed anti-HDV candidate Artin Giles. Momentum members in Haringey were also accused of anti-Semitism in July when activists “shouted down” Labour councillors who supported a motion to adopt the International Holocaust Reembrace Alliance’s definition of anti-Semitism, which is recognised by the government.

Her resignation came a week after Labour’s national executive committee (NEC) ruled that Haringey should pause the HDV scheme. This was the first time the NEC had intervened in this way in the decisions of one of Labour’s local authorities. Kober was not told about the motion before it was voted on and was not able to make her case to the NEC. The decision came in the first NEC meeting attended by Momentum leader Jon Lansman, who was recently elected by Labour party members as an NEC representative of local constituency branches. Momentum, an organisation which grew out of Jeremy Corbyn’s campaign for Labour leader, has led much of the opposition to the HDV scheme. The grassroots organisation has deselected a third of the Labour group on the council, meaning Momentum-backed candidates will replace those councillors after the May borough elections, in a borough that has been run by the Labour Party since 1971. Pundits say this means Haringey will be the first “Momentum-run” council.

A significant minority of 21 current Labour councillors, who asked the NEC to intervene, as well as both the borough’s MPs, oppose the scheme too, and the council’s scrutiny committee has called for a halt to the project. In January of last year, the committee issued a report which stated that the 50:50 venture would create a democratic deficit, and result in a situation where councillors could not make decisions about council housing stock without Lendlease’s approval and could only frustrate decisions by themselves. The committee also believed that there were not sufficient contingency plans in place should Lendlease collapse, as Carillion recently did leaving taxpayers to pick up the tab on its public-sector contracts.

The committee also cast doubt on the council’s guaranteed right of return pledge, citing the case of the Heygate development in Elephant & Castle where only 45 original households returned, with the rest of the community being scattered across London. The estate had a bad reputation and was the location of “urban drama” Attack the Block. Southwark council decided to tear it down in 2002 and entered an agreement with Lendlease to build 2,530 new homes. Originally the council had planned to build 500 social housing units. Only 82 units were put aside for original residents. Vice reported in April that 100% of houses in the South Gardens part of the development have been sold to foreign investors.

Local residents and business leaders in Haringey have started a campaign called StopHDV and launched a legal challenge in July, which now means that even if the council decided to push ahead with HDV after the May elections this would be subject to the outcome of an ongoing legal review. The case was heard in the High Court in October. StopHDV argued that the project lacks transparency (key legal documents were reportedly released in bulk just a week before the cabinet voted to approval HDV), doesn’t meet equality requirements and may have a significant detrimental effect on the public purse. They also argued the council has no legal authority “in setting up a HDV through a limited liability partnership as opposed to a company.”

StopHDV have also organised demonstrations against the scheme outside council meetings. Another demonstration is planned for Wednesday, following similar action taken in Southwark where students protested the University of Arts London (UAL) partnering up with Delancey Real Estate to redevelop Elephant & Castle, putting at risk the social accommodation and businesses of mostly BAME residents. 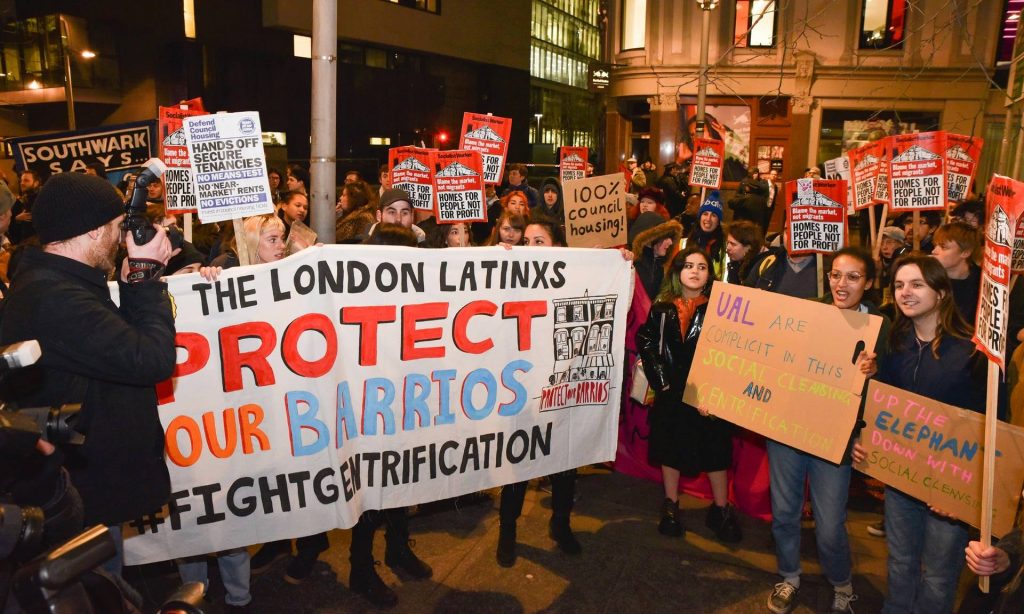 Though there are significant risks associated with HDV, and the council’s guarantees (which are hard to pin down because exact numbers of social housing depends on individual sites which are decided on a case by case basis) of a right of return need to be made much more airtight, the housing charity Shelter believes projects such as HDV are the only way to build the housing London needs when council budgets have been cut back by more than 40% and councils can only borrow up to £50m to spend on housing. Stressing that there can be no ‘do nothing’ option, they noted last year that “in the absence of realistic alternatives, Haringey’s appears a pragmatic way forward” in an area with too many “homeless families and too many people living in poor quality homes.” But with Momentum likely to take over the council in May, the HDV will likely never happen.

The challenge for Haringey’s next leaders will be to avoid doing nothing. But with Jeremy Corbyn supporting mandatory balloting of residents before development takes place, much more work will have to be done to bring on board residents if any development with the scale of the HDV is ever to happen in future.

PrevPreviousNorth What It Seems: Making Sense Of The “Hermit Kingdom”
NextLabour pledges land reforms in a bid to recreate ‘municipal socialism’Next
On Key