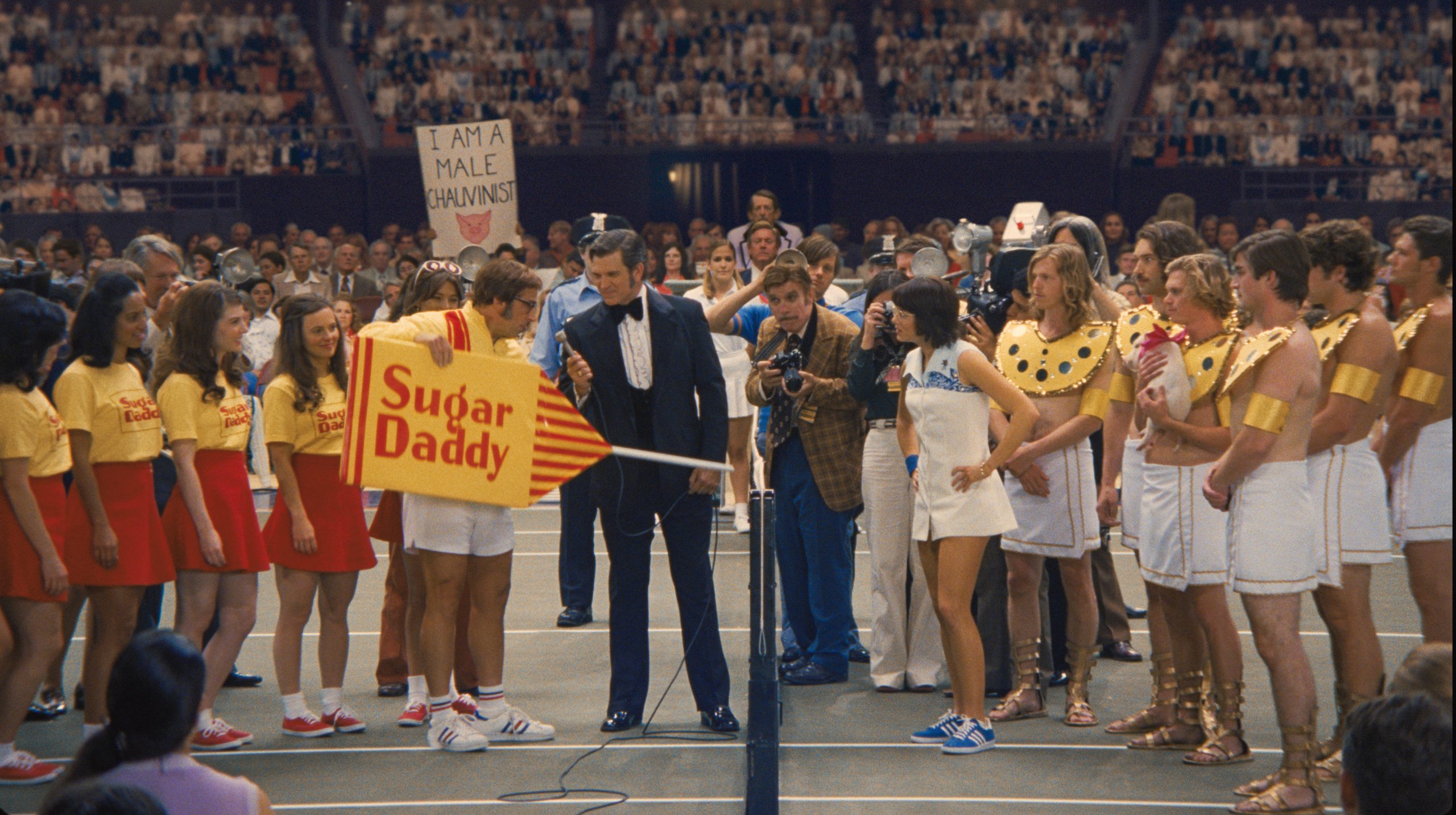 Just playin’ around: “Battle of the Sexes” and “The Florida Project”

“Battle of the Sexes” isn’t a particularly subtle film, nor is it trying to be. It’s about a primetime tennis exhibition match between Bobby Riggs (Steve Carell), a former world number-one, and Billie Jean King (Emma Stone), in 1973 the female number-two. There’s a heated publicity campaign. Riggs poses naked – behind a tennis racquet, thankfully – for a magazine shoot. It’s called “Battle of the Sexes”.

Well, maybe there’s a little more to it. You can expect as much from Jonathan Dayton and Valerie Faris, the directorial (and marital) partnership behind “Little Miss Sunshine”, the 2006 family comedy-drama which belongs in every shortlist for best film of this century. What “Battle of the Sexes” does, with refreshing genius, is tell its audiences right off-the-bat that you can shove that supposed artistic subtlety, that goddamn nuance, right behind Bobby Riggs’s pornographic racquet. Of course it’s a sports movie. Of course it ends with a much-anticipated, record-breaking viewership-wielding showdown. Of course one of the Sexes is going to come away victorious, and the other forever defeated.

Or perhaps not. “Battle of the Sexes” is, under its salacious façade, a character study into the public and private lives of its enigmatic duo. And in tennis, those existences diverge freely. Luckily, Stone and Carell bring performances to match the charisma of their real-life counterparts – Riggs a self-described “male chauvinist pig” and King a driven tennis talent and, more importantly, an unshakeable feminist. Before that was cool.

Faris and Dayton direct the film with the same gusto and sophistication they brought “Sunshine”, constructing gorgeous shots of monolithic hotel balconies (it’s the 70s) and the dinghy rooms out of which they jut. The soundtrack is immense, also: Elton John’s “Rocket Man”, a near-staple of 70s-era retrospectives, finally receives the atmosphere it deserves, gracing one of the best on-screen love stories of the year. It isn’t a spoiler to say this involves King, whom Stone brings to life with new effortless zeal. (Whispering) she’s even better here than she is in “La La Land”. And that’s not to exclude Steve Carell, who moves from strength-to-strength as a Serious Actor. Simon Beaufoy’s screenplay offers complexity to an individual no one expected could spell the word – Carell returns that serve.

“Battle of the Sexes” is ultimately a highly enjoyable film, something which can’t often be said for awards contenders of its calibre. In this field that endearing salaciousness, in the face of unfortunate topicality, might cost it among the decision-makers that matter. It shouldn’t.

Kool and the Gang’s “Celebration” opens “The Florida Project”, neatly setting the tone – at least among half the characters – for the rest of the film. Directed, co-written and edited by up-and-coming director Sean Baker, best-known for his 2015 iPhone-shot feature “Tangerine”, it depicts with “Moonlight”-esque beauty and brutality the lives of children and adults a stone’s throw away from The Happiest Place in the World. When you’re a kid, that can feel like light years.

Halley (Bria Vinaite) is raising her young daughter Moonee (Brooklynn Prince) in Room 323 of the $38-per-night Magic Castle motel. In the scorching endless Floridian summer holidays Moonee can only play with her friends, Scooty – Room 232 – and Jancey, down the street in Future Land. Jancey is introduced to the gang because Moonee and Scooty conduct a spitting contest on her grandmother’s car, and she offers to help clean it all up. To the grownups’ horror, the trio turn the clean-up into another game, shooting laser guns (cleaning spray) at the dripping saliva. “Wow, we should really clean inside too”, Moonee snaps, unimpressed at the vehicle’s scruffy interior.

Things are a bit more complicated for Halley, and Willem Dafoe’s Bobby, the motel manager, whose whole job seems to entail chasing after the meddling kids and watching security footage of their latest exploits. Halley, on the other hand, doesn’t have the luxury of a day-job, exploiting the informal sector for Moonee’s food money wherever necessary. They walk along freeways laden with IHOPs and strip mall gift stores, long-time tourist spots for wealthy Europeans to balk at abject American poverty, the same Europeans who might conduct their own excursions to 323, no-strings attached. As I said, it’s not Disney World.

In truth, much of the film’s 110-minute runtime is spent following Moonee and her friends around the motel and its surroundings, as they plead with sympathetic ice cream-eaters for loose change and spy on naked Floridian retirees in the parking lot swimming pool. If it starts to feel a little formless, how do you think Moonee feels? Halley and her friend Ashley, meanwhile, entertainment themselves at the club, where we see decadent neon in the Holy Land of neon decadence. If “Battle of the Sexes” is a loud sigh at the social and cultural status quo, “The Florida Project” is a Fuck You.

But the kids needn’t concern themselves with sentences like that. Not yet, anyway. They seem to be having the time of their lives. What’s not to celebrate?