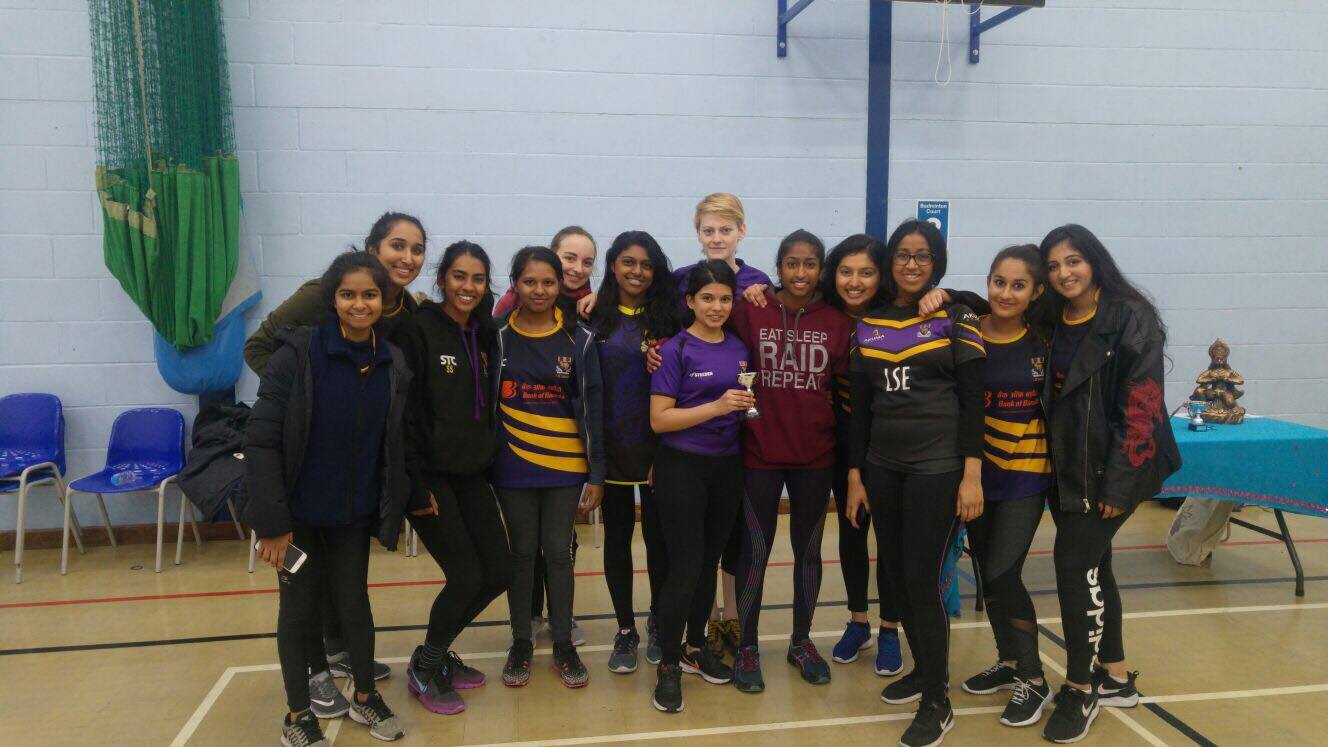 The reinstatement of the National Kabaddi League

This year heralds the new age of Kabaddi in the UK. With four major tournaments, regular friendlies and the restart of the National Kabaddi League, consistent competitive matches will be played every few weeks. The beginning of the season saw the first matches of the NKL, with LSE fielding a strong team to take on the likes of Imperial College, Birmingham University and Shakha (an amalgamation of community teams with ex-university and England players).
LSE men played Imperial B and Kings, beating them both comfortably. The team will next play in January, aiming to continue their winning streak.

On Saturday 18th November, LSE Kabaddi travelled to Heston to play at the annual Kabaddi Cup. We took two men’s teams and one women’s team – both vying to win their respective groups.

The day started with group matches for the men’s games, with LSE A topping their group after wins against Imperial B, Warwick and KCL with one match to spare. The final match of group A was a non-contender, however it saw the captain getting injured. Nevertheless, this was a blessing in disguise as the first team won their semi-final match and realised that they weren’t entirely dependent on their captain. LSE B faced a tougher group, having to play against Imperial A (the current champions), Birmingham and Oxford. Unfortunately, facing these teams, LSE B wasn’t able to make it into the semi-finals but still finished third in their group.
Once again, we were in a final against Imperial A, our formidable rivals. After a scintillating showdown, a coin toss and golden raid, Imperial won by 1 point – taunting the LSE men and denying them yet another first place.

There was one women’s match – a highly anticipated clash between LSE and a mixed Imperial-Kings team. In the previous Cup, Imperial won with us becoming runners up over Birmingham. Since then, LSE have won titles at the NHSF London and South Zone & Nationals tournaments.

LSE gained the lead at the beginning – courtesy of the raiders who slowly eliminated the IC/Kings players – and knocked the entire team out within the first 10 minutes. Tackles by our corners including leg takes and rugby tackles – secured further points and we went into half time with a lead. The opposition gained some traction with several raiding and defence points. Luckily, the second half swung back into our favour and the end score was 67-40 to LSE, a clear win that led to yet another trophy.

The last Kabaddi tournament of 2017 was held on Saturday 2nd December. Both men and women played a round-robin type of tournament.
This was the first time we had two LSE women’s teams – a feat never achieved by any university before. LSE A first played against Kings, and won easily. LSE B then played Imperial and despite the team only being formed a week ago, they gave Imperial some tough play, albeit with a loss at the end. Next was a match between both LSE teams, which was incredibly fun and full of vigour from all 14 women on the mats. After losing this, LSE B went on to play Kings, and beat them by a considerable margin – proving that this is a sport for everyone. With both Imperial and LSE A having won the most matches, they faced each other in the final. The match started off conservative to begin with, and Imperial made strong tackles against the LSE raiders. However, this turned quickly and LSE held the lead, winning the match and being crowned champions once again.

The men’s matches started off with a clash between LSE B and Imperial A, a match Imperial won despite some good raids by the LSE team. LSE A next played Kings, beating them with careful defence against the Kings raiders. Kings beat LSE B, who made team tackles and tactical raids full of grit and power even against Imperial B. Next was a match between LSE A and B. Whilst the A team were a certain through to the final, the Bs still gave them a match to remember, providing amazing tackles against the A’s raiders.

The final, like every other Kabaddi final in the history of finals in the last five years was between LSE A and Imperial. Being second to Imperial had become an almost guarantee for LSE. However, this was all to change. The final began with points being awarded to both teams on a similar basis. But then, a fantastic raid by LSE gave the men five points, pushing them into the lead. Imperial eroded the lead, and it was left to the final two minutes of the match to decide the winner. The LSE men remained incredibly composed during this time, and were able to win the match and snatch the title and smiles from Imperial, achieving LSE men’s first trophy in a few years. This was an exhilarating way to end the day, and a moment to sit back and realise we made history – both our men and women won the tournament and produced a result no other university has ever achieved in the world of Kabaddi.

Congratulations to the LSE men and women of the tournament: Bryan, Azhar, Akanksha and Nitha.

In the new year, we have tournaments hosted by LSE and NHSF. The goal is to retain our titles and confirm that LSE is now the number one club in Kabaddi.