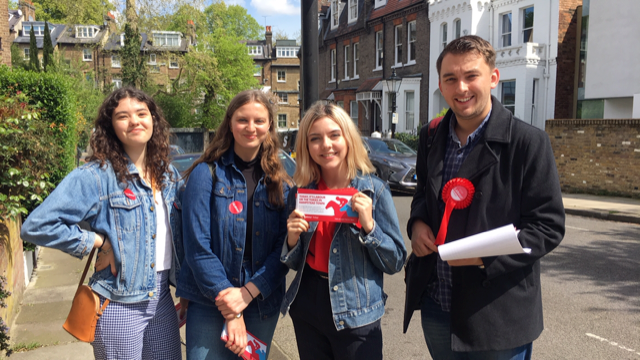 ‘The average LSE student is a bit like David Cameron’

Catherine MacLean, the Labour Society’s newly elected chair, has a lot to say. She talked to the Beaver about education, student politics and the scourge of anti-semitism on campus and in her party.

In the first weeks of her first year at LSE, Catherine stumbled out of bed and into the lift at Carr-Saunders. Plastered on the walls around her were a number of fascist symbols scrawled in sharpie, including swastikas. Weeks of pressure on the Students’ Union and the University amounted to very little, and certainly not the hate crimes investigation pushed for by Catherine and her friends. A year on, the perpetrators have not been caught.

“All we got – no offence – was a fluff piece in the Beaver. The Union said there was nothing they could do, which really angered me. They should’ve gone to the University and said ‘These people are unsafe.’”

The Beaver: So you don’t have confidence in the SU to deal with hatred on campus?

MacLean: Not really, no. In my personal experience, no.

TB: Do you have confidence in Jeremy Corbyn to deal with anti-semitism in the Labour Party?

TB: Do you have much confidence in Jeremy Corbyn to deal with anti-semitism in the Labour Party?

MacLean: No, I don’t have much. I really hope he can. I’ve been a party member since 2014, and in 2015 I think we all watched the tone change. I wish he’d been more hardline on it, and he’s made mistakes in the past. I don’t know what we have to change, but we have to change.

TB: Is the NUS fit for purpose?

TB: Where would you place the average LSE student politically?

TB: Does that upset you?

MacLean: I do think it’s a shame that a once-stalwart left-wing university has changed so much. I think that has a lot to do with fees rising and changes in the way universities are run. There’s more of a business model that’s affected the way students are as well. More working class students are going to university, but not necessarily this university.

TB: Did LSE’s historical left-wing credentials affect your choice to apply to LSE?

MacLean: Actually no, not at all. I did pretty badly in my Year 12 and then I was looking at universities and saw that my degree had entry requirements of AAB. I just wanted to go to a good uni.

TB: If you could have any Labour policy enacted tomorrow, which would it be?

TB: Really? Out of everything?

MacLean: It’s the one that first came to mind, the one I have absolutely no quibbles about. I think it should’ve been done by a Labour government in the past.

TB: I’m guessing you didn’t go to a private school.

TB: Which historical Labour figure are you most inspired by?

MacLean: Attlee. Though Gordon Brown made the biggest impact on my life. I went to some of the worst schools in the country – statistically – but his policies before 2010 made a real difference to me.

TB: Who did you vote for in the 2015 leadership election?

MacLean: Yvette Cooper. Then [after Cooper was eliminated] Jeremy Corbyn.

TB: Who should be the next leader?

MacLean: Ooh, Angela Rayner. I really like her education policy. Education is so important to every other social policy; it’s the bond that holds them all together. And I’d love to have a female leader who’s also working class.

TB: The Conservatives are beating Labour two-nil in terms of female Prime Ministers, something which many Tories take great pride in. Does it disappoint you that Labour has never had a female leader?

MacLean: Well yeah, it’s disappointing. But it’s well-known that Thatcher’s gender had nothing to do with her record; she devastated the North and working class communities. That’s not something to be proud of.

TB: Do you read a national newspaper regularly?

MacLean: Usually I read the Guardian. Though I’ve been really disappointed by some of their transphobic stuff lately. I don’t know what to make of that. I really like a lot of what The New Statesman are doing.

TB: Do you agree with Francis Fukuyama’s argument that identity politics is hurting the left’s electoral prospects among its traditional, white working-class base?

MacLean: No. I think it’s important to remember we haven’t been in power. People have watched their public services crumble under austerity, and they’re angry about that.

TB: Did New Labour miss an opportunity to go further than it did, after the landslide victory in 1997?

MacLean: We had a huge mandate we could’ve been more radical with. We could’ve revolutionised education, but we barely touched it. The Iraq War was a mistake. But New Labour did a lot for people from shit areas, especially kids. So there’s that balance of ‘So much good was done but we could’ve done so much more.’

TB: What would a ‘revolution’ in education look like?

MacLean: I don’t think we should have grammar schools – they stratify the classes. Obviously private schools shouldn’t be charities. At least there shouldn’t be so many of them. I went to a school sponsored by Rolls-Royce, so they’d come in for a couple of hours a week to talk to us in return for funding the school! Education should be left to the state, not the private sector.

TB: Thanks for taking the time to speak with us.