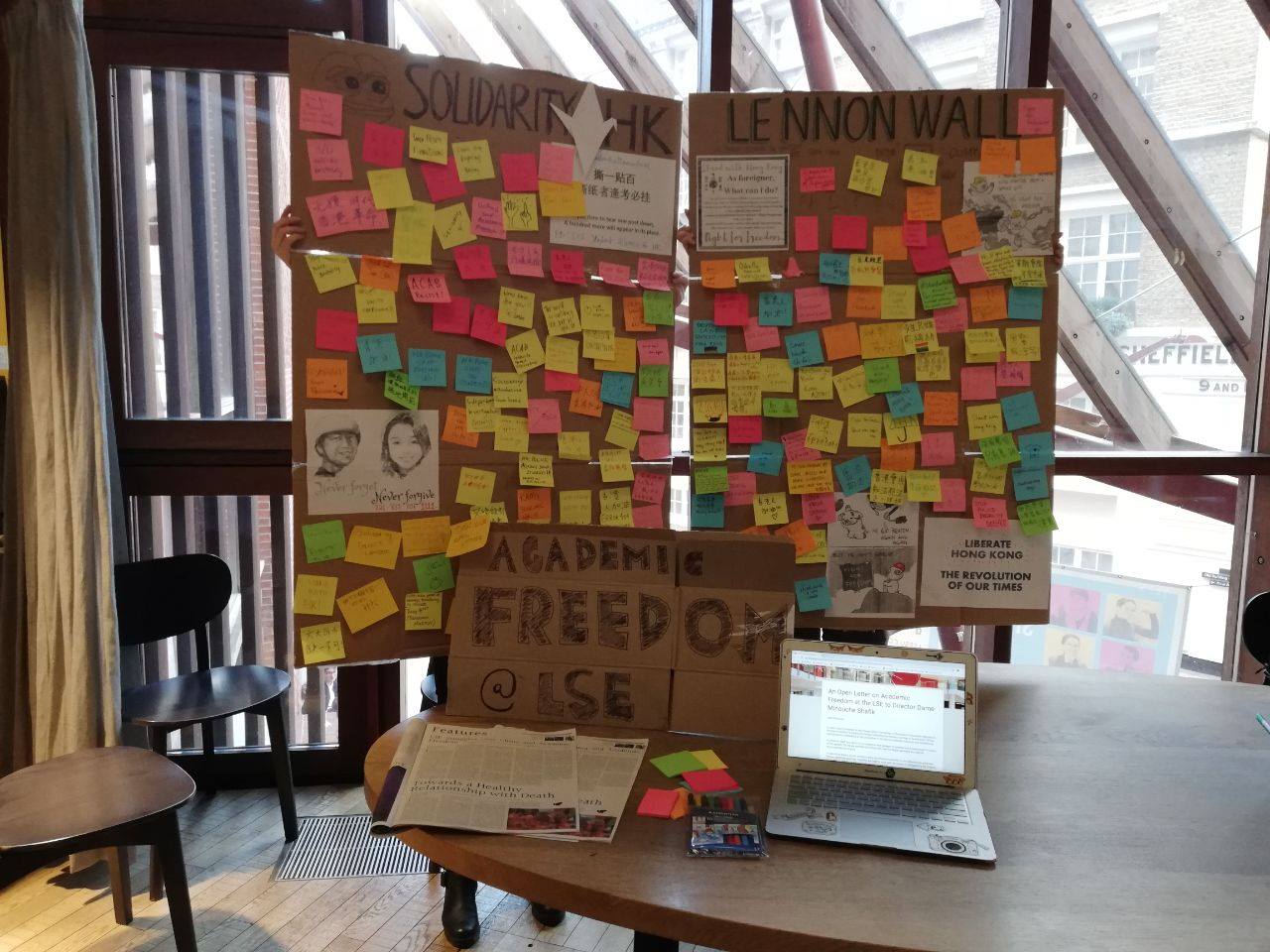 By Meher Pandey and Raphaelle Camarcat

Two days before the LSE Students Alliance for Hong Kong staged Black Bloc Day at LSE in solidarity with protests in Hong Kong, the Financial Times published an article about a pro-Beijing threat to academic freedom at the university. LSE administration was forced to “put on hold” negotiations regarding vested-interest funding for research programmes when faced with criticism from academics.

The proposed China programme was backed by Mr Eric Li, a Shanghai businessman and venture capitalist who is a vocal proponent of the single-party system in China. The FT obtained university documents saying the scheme would fund research, support new undergraduate and postgraduate courses on China, and would be overseen by an advisory group of “distinguished individuals from China”.

LSE Professor Chris Hughes said it was clear that no members of this advisory group would be critical of the Chinese government. He said in his letter to LSE’s administration that this “shows that the school’s existing procedures for protecting our core values and reputation are inadequate.”

Theresa, surname withheld, is a member of the alliance and organiser of Black Bloc Day. She told The Beaver the FT article demonstrated why students at LSE need to engage with their campaign. “You might think it’s just Hong Kong’s fight but it’s not. It’s everywhere.”

Theresa said it was worrying how close LSE administration got to accepting funding from clearly partisan interests. She said this encroachment of academic spaces at LSE is an extension of the suppression of protests in Hong Kong – the same threat taking a different, less violent, but more insidious form. “We’re talking about the freedom to write whatever you want, research whatever you want. We take those freedoms for granted here in London. A lot of these ‘influences’ have already come knocking at our door,” she explained.

This fundamental idea anchors the Hong Kong protest within a larger global framework, a fight for universal rights to freedom of speech, expression, and information – all of which are now especially relevant to the LSE student body.

On 31 October 2019, over 70 students from different nationalities participated in Black Bloc Day. They stood on the stairs outside the New Academic Building, wearing all black to show protestors in Hong Kong that overseas students and the international community supported them. “We see you, we hear you, and we stand with you,” said Theresa.

“Protestors in Hong Kong are facing unprecedented levels of crackdowns on their freedoms. It is deeply unjust, as students like us enjoy relative freedom at a distinguished university in London. It is uplifting to see international peers showing solidarity with our friends at home… Protesting should be a right, not a privilege,” said the alliance.

Theresa wants students at LSE, as part of an institution with significant influence in worldwide dialogue, to act as effective allies to students in Hong Kong while also addressing LSE’s own issues. The Students Alliance for Hong Kong will be campaigning to improve LSE’s procedures regarding external donations for research.

Victoria, surname withheld, is also a member of the alliance and organiser of Black Bloc Day. She told The Beaver that the group were not against this funding purely because it was from mainland China – it was the room it left for oversight by pro-government actors that made it dangerous. “When you’re accepting millions to potentially self-censor and silence yourself…” she trails off. Undoubtedly the fight against self-censorship is harder when the institutions you are working within are willing to negotiate with potential surveillance agents for monetary gain.

LSE has accepted questionable funds in the past: the LSE-Gaddafi affair is still fresh in students’ minds. Large sums from the Gaddafi Foundation were donated to LSE’s Global Governance research centre as the late Libyan dictator’s son finished his PhD in 2008. Former LSE director Howard Davies was forced to step down in 2011 as a result of the scandal.

The FT report also revealed that similar programmes funded by philanthropic actors from India and Israel are currently being discussed. Although information about these programmes, the actors involved, and their relationship with their countries’ governments is limited, it is important to remember that the current governments in both countries have authoritarian tendencies and are known to silence dissent. Both countries are currently facing criticism for their actions in disputed territory, in Kashmir and Palestine respectively. The LSE administration has a history of engaging financially with actors that can create an environment of self-censorship for its students and staff and it doesn’t seem willing to stop yet.

There were attempts to intimidate protestors on Black Bloc Day, too. A masked Chinese man filmed the entire event, including speeches given by unmasked organisers. “We will not be succumbing to any attempts to influence our psychology and to create an environment of intimidation, self-censorship, and white terror,” said the alliance in a press release.

The threat is especially real for Hong Kong students who have families in China or its territories and who may choose to return after their degrees have ended. Being identified as a vocal critic of the Chinese Communist Party can be dangerous.

In her work with Amnesty International at LSE, Theresa reached out to Students for a Free Tibet in 2017, to collaborate and begin a conversation on campus regarding the Chinese occupation of Tibet. She found that most members of the now inactive society were not Tibetans. Ellen Lees, former president of the LSESU chapter of Students for a Free Tibet said, “I remember when I was at LSE, there was only one Tibetan student who had reached out. She was very involved with our events and brought home-made tea and momos. But she said that she would be nervous about anything more public than that. I know students outside of LSE who were involved in all sorts of things [with Students for a Free Tibet], but specifically chose not to participate in the march outside the Chinese embassy that we do. Because there’s cameras there and they take photos of the protestors… [Surveillance] is definitely a tactic they use.”

“There are many students and academics here who do not have to go back to China who can and will stand up for us when we can’t,” said Theresa. She is not too worried about the success of the movement.

The Students Alliance for Hong Kong has the LSESU’s support, both financially and otherwise. The SU Campaigns Fund fronts campaign costs and the majority of the SU student executive voted in favour of officially endorsing the movement.

The alliance is currently drafting an open letter to LSE’s director Minouche Shafik in regards to academic freedom.