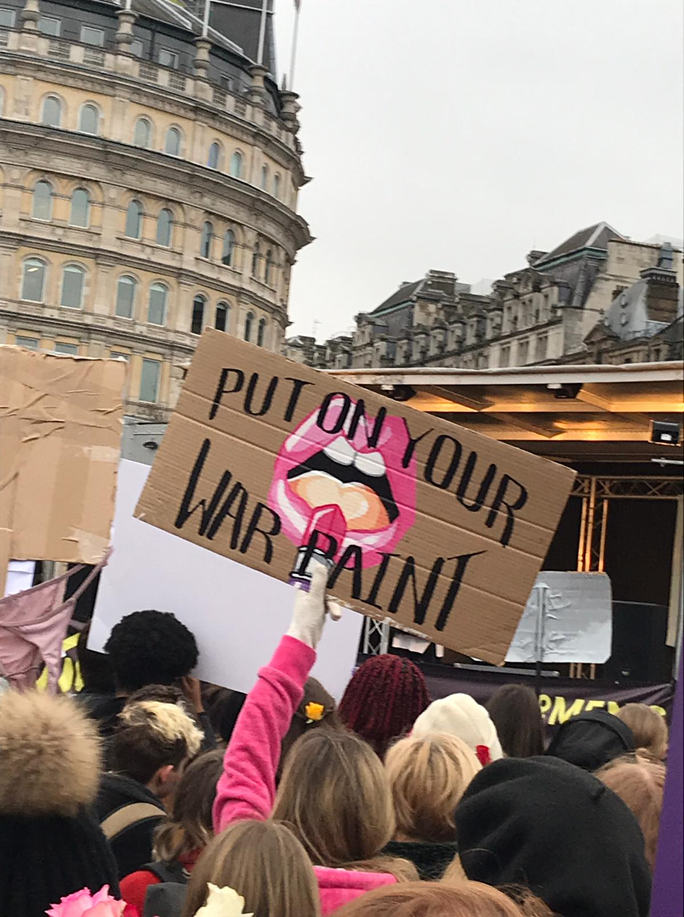 Among the thousands of people who throng the streets of central London, LSE students joined the fight for equality – against patriarchy, austerity, domestic violence and marginalisation on Saturday 19th January.

Surrounded by inspirational messages of empowerment, this third annual march originally initiated following Trump’s inauguration in 2016 and since, has progressed to become a movement confronting contemporary female issues. This year’s theme of “Bread and Roses” has been a popular political slogan associated with feminist activists. With intersectionality being at the heart of the march, it is no doubt that a diverse crowd from a range of different backgrounds attended supporting the motto: #WeAreChange.

However unlike previous years, the march was not only in aid of heightening solidarity and empowerment, but people were also marching against Brexit, oppression, racism and bigotry. The main reason for this is the current tension of political uncertainty.

Women were marching 100 years ago and continue to do so today rallying for equality, so that topics such as the gender pay gap, social inequality and gender discrimination become old news. The #WeAreChange movement encourages and motivates all of us, as students to question the society around us, and strive for the evolution of a fairer society.

Rania McDonagh (BA Geography student) and Niamh Roberts (BSc Economics student) attended the march, among other LSE students to show their support for the projects and initiatives being undertaken to empower women from different socioeconomic backgrounds, races, religions and ages. McDonagh has previously attended various women’s marches, feminist events and conferences, and the London Women’s March was merely an extension of her long-standing advocation against female oppression.

“For me, it wasn’t enough to just sit in my own frustration…this gave me the opportunity to get involved in something tangible ”

Roberts’ hopes of inspiring positive social and political change, reflects a wider criticism at the public’s annoyance at the lack of headway this movement has had. Both students represent a new generation of ‘activists’, raising the voices of women around the world and becoming actively engaged in present-day social movements.