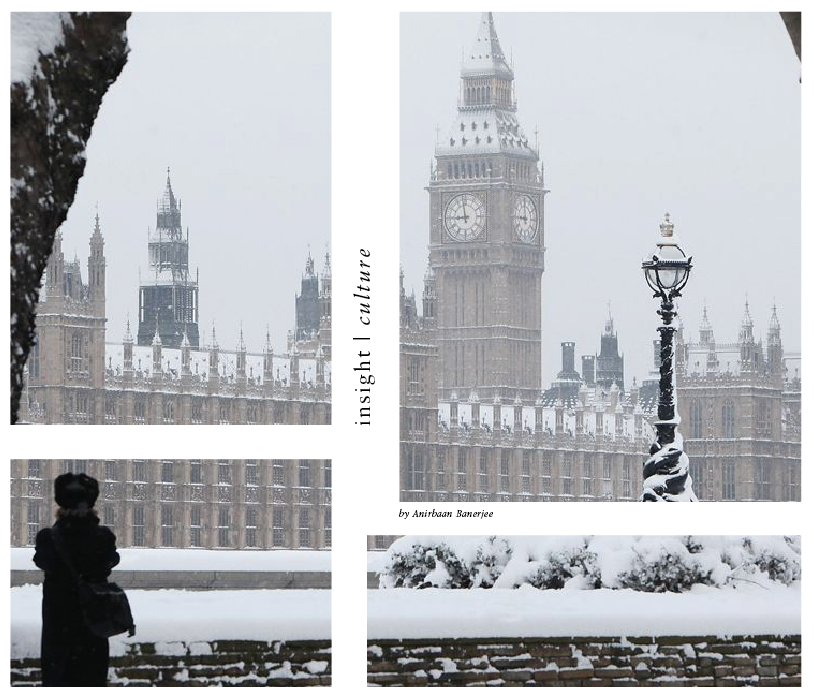 The Many Colours of Snow: An Immigrant Experience

First, snow was colourless – a seemingly impossible pigment of the imagination, rising in aimless reverie as the mind remarked upon the waxing nights and waning days through double-glazed windows. The immigrant, before s/he departs to become one, is bestowed with forewarnings and farewells that allude to a quest involving undulating conditions. In due course of time, one realises that the tasks of this ‘quest’ are more humdrum than herculean. And like these tasks, the ‘undulating conditions’ are also more literal than heroically allegorical – weather conditions that have so far been beyond the horizon of one’s experience. One learned to partake in the Londoner’s morbid fascination for the weather – a conversation starter that proved to be as perennially effective as its subject proved to be perpetually fickle. The days declined as the infamous British sun defied history every day to set sooner still. It evoked a longing for the heat of the sun that may be perceptible as its rays fall upon one’s back, a longing for a rain that heralds its arrival by beating unapologetically against the pavement rather than sliding silently, stealthily onto the streets. But, despite this, or rather, because of this, there was snow. Or, at least, the hope for snow. And that was enough to brave the cold wind – the hope that one day the silent rain will turn from bleak to beautiful.

But, before that, the colourless snow paled. It receded from the imagination because it never really came. Even when it came, it hardly ever stayed long enough to settle, and so, it was as if it had never come at all. It came when I visited back home, tempting me to come back. And then, luring me, it turned away. It was forgotten as well – I had not known it long enough to miss its absence. Instead, I found a friend in the furtive sun. I chased it in the library at noon to bask in its reluctant glory. I learnt to breathe in the beauty of a night that lasted. The landscape seemed less lacking, and more as if it were complete in a different manner.

And then, suddenly, snow came incessantly – and it was technicolour. Everything was white, but so much more. I saw rose-crimson tips-of-tongues feeling for snowflakes like powdered sugar. I spotted half-formed snowmen with crooked smiles and orange noses. I saw human bodies drowned in multi-coloured clothing building allegiances in the heat of snowball fights. Even the banal seemed beautiful. The black of the pigeon that would merge with the concrete vividly shone against the snow-covered streets. The purple of the garbage bags struck vividly in a way that I could have never imagined – who even bothered to remember the colour of that which was kept in the house for the express purpose of throwing it away?

But, the snow did not stay white – something which the stories generally leave out. Of course, I romanticised. Waxing eloquent over the purple/violet/fuschia-ness of the garbage bag would not make its collection and disposal in the unforgiving weather any less dreary. I walked in the wind as the seemingly benign snowflakes struck upon my numbed face. I wonder how many saw this snow, in which I see so many colours, and also saw the despair of clutching cardboards in a cold open night. Soon, the white street pavements resembled sandpits as the grey and the brown from firm boots – prepared for the winter – and wobbly trainers – utterly unprepared – waded through what was, in fact, a momentary whiteness.

The snow turned into a chequered flag – recording the routes we take everyday with shoe prints and tyre tracks that crossed into each other. And then it turned darker still, as it began to disappear – giving rise to a muddy slush that fails to be described in exalted metaphors. Of course, the snow wasn’t magically disappearing – it was unsophisticatedly melting and seeping through the drain. The snow was not apart from everyday life. It was a part of it and all of its messiness. And life seems hardly ever a flipped coin of beauty and bleakness. Rather, there was a bleakness in the beauty, a beauty in the bleakness. Even if I wanted to forget that, the snow wouldn’t let me.

Just for a moment, now, the snow seems silver. It has almost disappeared now, emaciated into the froth upon a wave rather than the wave itself. In this state, it reminds me too much of the ice cubes I find in my refrigerator all year round – an image whose mundaneness threatens to draw out all the magic I associate with snow in my mind. Yet, as crystal traces of snow line the edges of the sidewalk and I stand on the shallow, watery nothingness where the snow stood yesterday splendidly as if it would never leave, I cannot help but marvel.

The snow fades to black. More than 6,000 kilometres away, the city where I spent all my life celebrated the end of winter by playing with water and colour to mark Holi, the festival of colours, while I watched a winter majestically in motion in London. Between the snow falling and fading to black, I felt the bitter-sweetness of being away from home, the feeling of an immigrant forever in the process of becoming one.