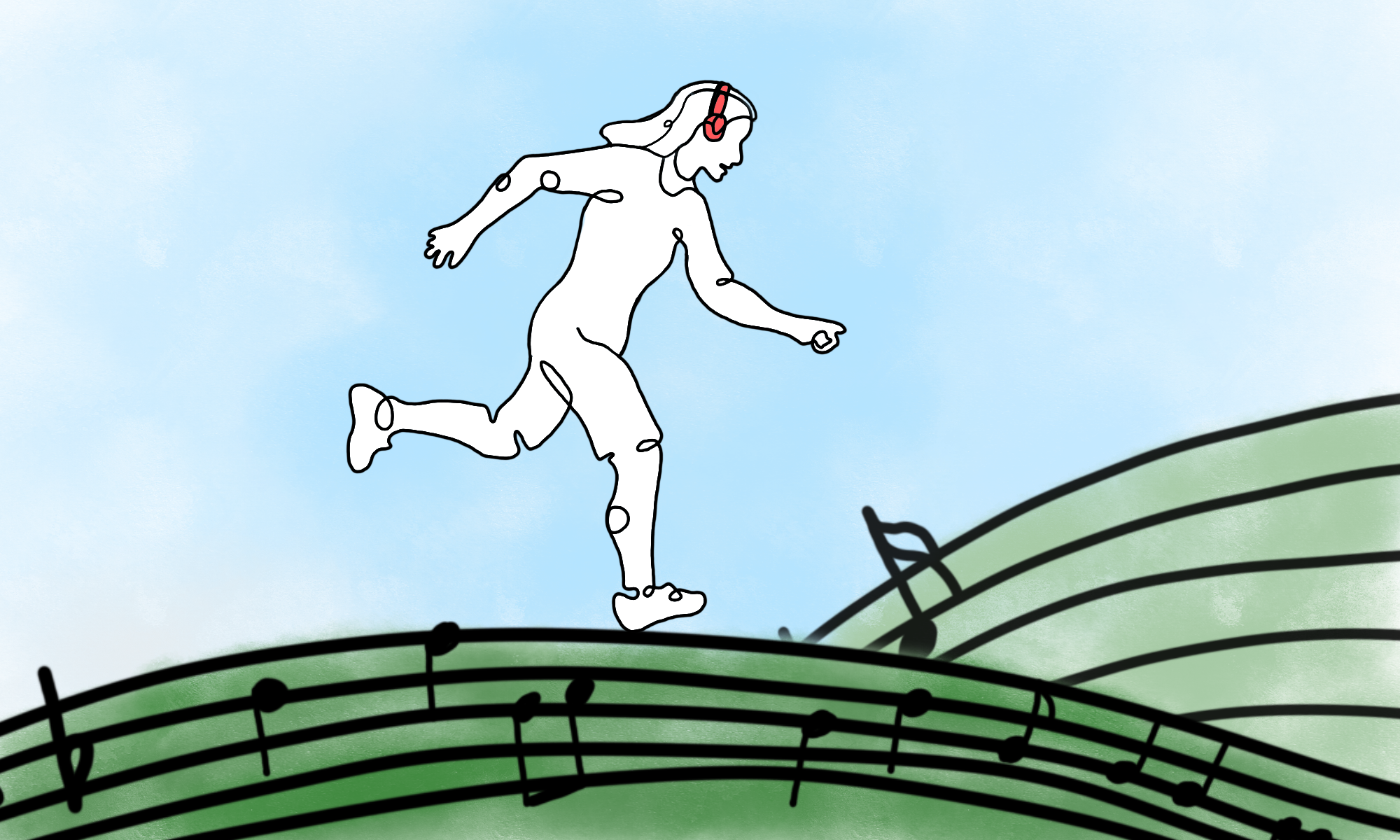 Music in Athletics: the motivational push with the social pull

Music allows us to set the tone and tempo of our lives, and this is as true in sports as it is anywhere else. For instance, sports such as rowing, cycling, and running lend themselves to the ‘synchronization’ of music, in which athletes incorporate music with a cadence that matches their physical exertion.

A prominent beneficiary of this is Haile Gebrselassie, a legendary Ethiopian distance runner. He famously broke the 10,000-metre world record while listening to ‘Scatman’ by Scatman John. He specified that ‘Scatman’ perfectly matched his target stride rate, which made it an ideal track to accompany his running.

In a series of interviews I conducted with LSE athletes, they echoed these practical benefits of using music while training or before competing. However, they also revealed that music helps them in more human ways: in the form of providing an inspiring message, facilitating team bonding, or evoking vivid memories.

I spoke with Gabriel Lever-Grecu and Caterina Bartelloni, both second-year students and competitive players in Tennis Society. Lever-Grecu, an Economic History and Economics student, reflected on how music helps him find the right headspace before competing: “The most important place or time when you listen to music is before the training, or before the match, ‘cause it gets you into a certain mindset. Before a match, you may feel very nervous, especially when you play competition from a young age, you may feel nervous, so it puts you in a better mood. You feel a bit more confident.”

Bartelloni, a Geography student, focused more on how music makes a difference in her gym training. She recalled an instance when her music translated to a stark difference in her performance: “When I was in the gym playing music, and I was doing some weight training, and then I had my normal songs queued. Then, by mistake, I put a song that was a bit low-tempo and more downbeat, and I could not lift the same weight anymore. I genuinely couldn’t and I thought ‘this is so bizarre.’”

I also had the opportunity to speak to several runners in the Athletics and Running Society. Runners, due to the largely individual nature of their sport, are virtually always able to listen to music while training. Listening to music while practicing or playing against someone in tennis, however, is considered disrespectful, as Lever-Grecu explained to me.

Genevieve Kirk, Carla Broussy, and Imogen Cronin are all runners in Athletics and Running Society. Kirk, a third-year Law student and the running captain, has continued to jog five or six times per week even through quarantine. She described how she prefers podcasts for longer runs but opts for music during more intense, shorter runs.

Her answer to the question of her current go-to running song — after a comprehensive browse through her Spotify —  ended up being ‘Wild Flowers’ by Frank Carter & The Rattlesnakes. What makes ‘Wild Flowers’ an ideal running song for her is “the tempo, because when you run, certain beats per minute reflect how fast, like the cadence, when you’re running. So I think it’s just a fast-going song but then it’s not too dancey because it’s a bit more indie. In Athletics (and Running) we normally discuss what music we listen to when running for work-outs. So we have each other’s Spotify profiles. It’s definitely a motivator.”

Broussy, a second-year International Relations student, is the running vice-captain, and she emphasized that she always incorporates music into her running, as it affords her an insulated, private space while running: “To be honest, for me it’s a way to disconnect. Even if I have my phone there with me playing the music, I know I’m not thinking about anything. I’m just focusing on the run. The music is kind of in the background. I don’t actually even listen. It’s just a way to be completely in my own bubble, away from the world. When I’m studying nine hours a day, it’s really nice to be able to disconnect and just go out and not think about anything for an hour.”

Broussy described a unique experience in which she had to limit her use of motivational music due to an injury: “When I was injured, the physio said ‘you cannot run fast’ and for a lot of people, I feel like when you’re listening to that kind of usual motivating running music, you tend to get carried away and increase the pace and go at the same tempo as the music because that’s how the music actually influences you.”

Cronin, also a second-year International Relations student, noted the importance of finding music that synchronizes with her pace: “Sometimes, if I’m listening to a song and it’s really energetic and fast, and then it suddenly dips down and kind of has pause and has a slow bit, that will impact how I’m running, because often I’ll be running to the beat.”

Merton Ngan and Aegli Evgeniou, who both compete in Volleyball Society, were also among my interviewees. Ngan is a third-year Economics student and the current captain of the men’s team. He cited ‘Hard Work Pays Off’ by Future and Juice WRLD as his favorite pre-match song, and explained why this song is meaningful to him.

“I think that’s the one that really gets me going. It doesn’t go hard on anything but it’s the message,” said Ngan. “I’m not tall. I’m not particularly athletic. I think just that message of working hard pushes me to be better. Or to have confidence in myself that the work I put in is enough to overcome. In volleyball if you’re tall, you get in and you’re pretty much guaranteed success, but I’m not tall. I try to carry that message with me, you can have all the talent in the world, but if you’re not willing to work hard for it, it’s pointless.”

Evgeniou is a second-year Mathematics and Economics student and the President of Volleyball Society. She made particular note of how music brings her teammates together, and recounted one of the women’s volleyball team’s pre-match rituals from the prior academic year.

“We always used to play ‘American Boy’ at the beginning, and, I don’t know, we all knew the lyrics and were dancing and singing to that song before the game, and it was so nice,” Evgeniou reminisced. “I always remember the other team that we were playing against, they were staring at us and they were — not jealous, but they saw that we were a team and that we had team spirit.”

Ngan recalled a similar, perhaps slightly more ridiculous pre-match ritual with his high school volleyball team in Hong Kong: “As kind of a pre-game thing, we would just run around the court and sing Spongebob Squarepants. Someone like me would go ‘Who lives in a pineapple under the sea?’ And then everybody behind me goes like ‘Spongebob Squarepants!’ We used to do that to get ourselves hyped and it’s that kind of team unity thing where we’re all just going crazy. Our whole team was in the same friend group and we really enjoyed each other’s company.”

Cronin offered a personal instance of music’s well-established power to evoke vivid memories. This came in the form of a memory of running: “A real memory that sticks out to me was when I was listening to Kanye and running down the beach in Miami and having the sun and thinking in that moment ‘this is the life, isn’t it?’ And I think sometimes you can transport yourself to it. You’re running along Euston Road and it’s so busy and it’s the total antithesis of running on the beach. You can transport yourself back to that day, to running on holiday. I think, as well, music is the one thing, more than any other thing, that can sharply invoke a memory or a sense of déjà vu. I can’t think of anything else that does it in the same way that music does, and just being able to transport, in a second.”

In the sphere of athletics, music serves several distinct, but equally profound functions. It is both a performance-enhancer and a social lubricant. As Ngan described, it can inject great focus and motivation, but also levity and enjoyment. Broussy remarked on an important take-away when describing her experience coming off of an injury: that the stimulation that comes with music is not strictly voluntary. Music brings about a different mental state for athletes, inspiring them and allowing them to escape while excelling at their craft.