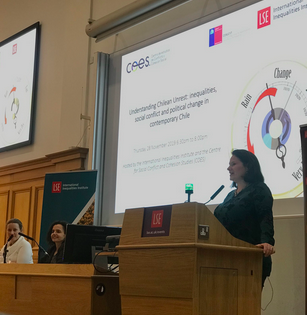 Dr. Kruger kickstarted the discussion, providing the audience with samples of data demonstrating a snapshot of the Chilean social gap since 2017. She presented slides on three main areas of contention in Chile: employment and income, health, and education.

Dr. Kruger claimed that part of the reason for the recent social uprisings is because the inequality in Chile has not changed. The median income is approximately £400 per month, which undoubtedly impacts the average Chilean’s well-being and future pensions.

Dr. Kruger explained that when there is an economic shock, workers who have salaries and contracts are protected by the law while those who are self-employed and whose contracts do not guarantee any form of social protection suffer. According to her, Chileans in the lower 20% of distributed income are often self-employed or work precarious jobs.

Moving on to health, Dr. Kruger drew attention to Fondo Nacional de Salud (FONASA), the financial entity responsible for health funds in Chile. Approximately 85% of Chileans are dependent on the public system for their healthcare. Only 12% rely on private care, most of whom are within the top 20% of distributed income.

Professor Sehnbruch claimed that Chileans who are currently waiting for government and public services for their healthcare are now resorting to self-funding or taking out loans to move to private. The problem with this is that when there is an economic shock or a shock of any kind, people are left far more vulnerable and have little to fall back on apart from their family and friends. This is one of the dire predicaments that is also motivating the protests, according to Professor Sehnbruch.

In the last portion of the talk, Dr. Kruger spoke on an uneven schooling system. She explained that having achieved universal coverage across all income levels in primary school and almost entirely in secondary school, one would assume Chile was a success story in the region.

However, Dr. Kruger revealed that problems persist in higher education. After the passing of the free tuition law in 2016, more young people from lower-income households have been able to attend university. However, Dr Kruger explained the new system segregated those who can afford to attend private schools (and perform better) from those who attend public schools (and perform poorly). The increasingly segregated school system creates resentment among those who do not have access to the educational benefits enjoyed by private schools.

Providing further insight into the educational challenges Chile has faced, Professor Emmanuelle Barozet highlighted how, despite more people accessing higher education in the last few years, Chile’s productive system has not been able to adapt.

When discussing the high level of violence during the protests, including deaths, rape and missing people, Professor Barozet said: “Chileans are used to it…this form of repression and violence is not new in Chile.” The distinguishing factor of the most recent protests, according to Professor Barozet, is that Chilean protestors are demanding a new constitution.

Ending on a positive note, Dr. Kruger said that compared to its Latin American counterparts, Chile does not have a significant debt programme with international organisations such as the International Monetary Fund and thus has much more leverage and choice in its decision making when attempting to solve these issues. “Hope has not been eroded from the country yet,” she said.