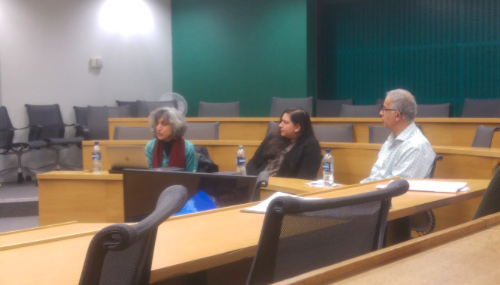 On 21 November, LSESU Modern Languages Society hosted a panel event on the work of Urdu poet Parveen Shakir. Her poetry, which centred around the themes of love, social stigma and feminism, as well as the English translations of her literature, were the main focus of the panel discussion.

Panelists present at the event included Naima Rashid, the author of “Defiance of the Rose”, a book containing English translations of Parveen Shakir’s poetry, and Dr. Amina Yaqin, senior lecturer in Urdu and Postcolonial Studies at SOAS. The panel was chaired by Adnan Khan, Public Policy Professor at LSE and visiting lecturer at Harvard Kennedy School.

Parveen Shakir was an Urdu Poet, teacher and civil servant in Pakistan. Her major works, which include Khushbu [Fragrance] in 1976 and Sad-barg [Marsh Marigold] in 1980 are well-known and respected throughout South Asia. These works have earned her several honours such as the Adamjee Literary Award in 1976, and later Pride of Performance, one of Pakistan’s highest honours, in 1990.

Author and translator of Shakir’s poetry, Naima Rashid opened the panel by pointing to how mainstream scholars put disproportionate emphasis on a narrow section of Shakir’s work, thereby immortalizing the poet as one that solely focuses on the subject of love in her poetry.

Dissatisfied with the neglect of the breadth and the more serious undertones of Shakir’s literature, Naima argued that her mission is to change this general perception of Shakir.

In translating her work into English and allowing it to reach newer, younger audiences, Naima stressed that her task is essential because many young Pakistanis no longer speak Urdu.

Naima believes that her project helps to “open up a whole new world in interpretation” of Shakir’s work. She pointed to a story about a young member of her audience, who thought that some of Shakir’s shorter poems seemed to her to be “Instagram poems.”

When responding to the audience on the challenges of translating Parveen Shakir’s poems, Naima highlighted how the poet often included some English words in Urdu literature, giving her work a special . Naima said that it is inevitable that such “additional dimension in the work would be lost.”

Nevertheless, Naima stated that she is always eager to understand which poems can strike a chord in people’s hearts, and the reasons for such reactions.

Unsworth acknowledges the difficulty students face in keeping up with one’s native language when it is no longer part of their day-to-day interactions. In response to this, the Society’s mission is to “try to provide a fun and informal forum to practice speaking […], writing […] and listening […]” through a wide range of activities such as French Cinema Nights and talks on languages used in the legal sector.

When asked about the inspiration behind creating the society, Unsworth shared his story of participating in an off-campus ‘language exchange’ organized by MeetUp, where participants talked to each other in French and English, swapping languages every 30 minutes.

“The atmosphere was very chilled and it was nice to meet some new people.  We wanted to bring this to LSE: set up a space with different language tables people could switch between, play some music in the background and of course, provide some coffee and snacks,” Unsworth added.

Looking to the future, Unsworth indicated the society’s interest in organising an Italian cooking social, as well as career-related talks related to professions such as journalism and law, “helping our members think about how they can use their language skills in a future career.”