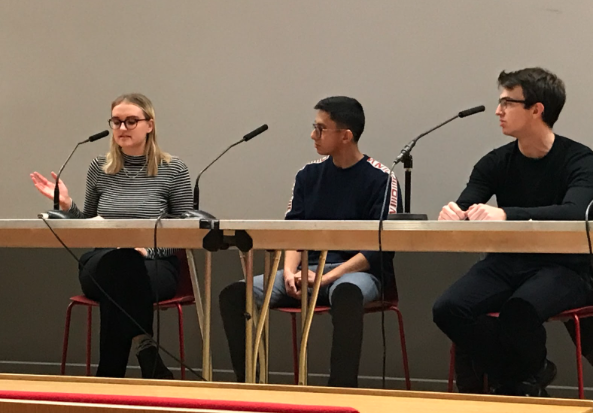 The purpose of the debate was to introduce each party’s manifesto to students, allow the audience to challenge the speakers on their party’s policies, and encourage students to register to vote.

The speakers discussed hot topics such as Brexit, social-economic policies, the environmental crisis, the NHS, international relations, anti-Semitism, Islamophobia and racism in the parties. Despite the great divergence in views and some contentious moments, the debate ended peacefully.

As expected, Brexit was one of the core questions in the debate. “I want to stop Brexit; this is the biggest issue of our time. Labour, unfortunately, is sitting on the fence and on the other hand, the Conservatives, the party of the hard Brexit. Make no mistake – Boris’s deal means higher tax and harder borders. We are the option of the bright future,” said LSESU Liberal-Democrat President Aadil Khan. Hamish Mundell, LSESU Conservative Party President emphasised the need to use Brexit for better trade deals and the positive yields for the country’s prosperity. He said, “Years and time were wasted on Brexit, while it should have been done years ago. The voters have their voice: they want Jeremy Corbyn governance, or they want Boris Johnson in the country board. Voting Lib-Dem is a fruitless vote – they don’t want a second referendum, they want rotation. And if you vote Labour, you are voting for Corbyn’s centred coalition, that will lead to two more referendums in the next year: one on Europe, and the second on the Scottish independence.”

On the other hand, Melissa Pittman, Labour Party President attacked the Conservative position and diverted the discussion towards welfare and economic policy. She said: “You have many people suffering for so many years, ten years of austerity. That is why people don’t trust the government, and in my opinion, that is why Brexit happened in the first place.”

The leaders also showed a decisive anti-racist approach, an issue that has affected all three parties in recent years. Commenting on the allegations of anti-Semitism in the Labour Party, Pittman said, “I think it is horrible and we haven’t done enough to protect the Jewish community in the party,” but “We now have a zero-tolerance policy, we will make sure that any member in the party that is racist in any form, anti-Semitic or otherwise, will be removed from the party instantly. Jeremy Corbyn, who I know, is thoroughly not racist in any way. In response to this question, I think that the Tories have a lot to answer, about Islamophobia in the party specifically, Boris Johnson himself compared Muslim women to ‘letterboxes’ and I haven’t heard an apology.”

Khan responded sharply, “The Lib-Dems had problems and small incidents of anti-Semitism, but what we did is expel them. We didn’t have years and years of people saying that we are a racist party, because we found the racists and we kicked them out.  So, for the question why it is taking so long to deal with this problem, I think that the answer is in two words: Jeremy Corbyn.”

“[Within the Tories] there is institutional racism going on. Nearly half of your members wouldn’t want to live next door to someone like me,” Khan added.

The issues that seemed to have support from all three parties were the NHS, as well as the climate emergency, although each proposed different programs to address these two issues.