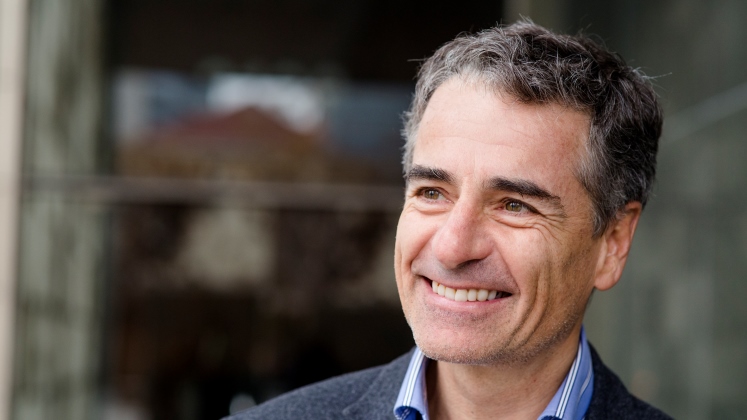 Andres Velasco is an academic who talks with the ease of a good politician. This should come as no surprise to those who have followed his career. The inaugural dean of the LSE’s new School of Public Policy has split his professional career in almost equal halves. He was Chief of Staff for the Minister of Finance in Chile, then Minister of Finance, ran for his country’s primary elections in 2014, and founded a political party which he then led. He has also taught at NYU, Harvard and Columbia before taking up his new spot spearheading LSE’s new public policy venture.

The politician in him is welcoming and warm, he answered my questions with ease and remained on message throughout. In the space of half an hour, the academic in him covered everything from populism, to good public policy across the world, and even the Uruguayan modernist painter Joaquin Torres Garcia.  Before we start the interview, Professor Velasco asks me for a minute as he sends out an email to his publisher back in Chile. His book was being printed as we spoke, a Spanish language discussion about liberalism and the threat of populism in Latin America. Admin out the way, we begin our conversation about the new  School of Public Policy.

“The big objective is to help train a generation of public policy leaders around the world” He is keen to highlight the global reach of the schools ambitions, one that chimes well with LSE international ethos. “If I think of the interesting policy solutions of the last quarter century: Issues of agricultural pricing, China has been very creative; resource booms and busts, the Norwegians led the way, and Chile imitated some of that; how do you deal with extreme poverty? Well, the conditional cash transfers that arose in Mexico and Brazil are fascinating; how do you deal with youth unemployment? Well some of the ideas from the UK have been used and imported to countries like South Africa and Colombia. So, being global is not only about having international faculty and students, but also in the outlook of the research and teaching.”

He is enthusiastic about his first year in the job, “We don’t expect to accomplish everything in the first six months, but we are very happy with the result so far. We are launching a brand-new programme, the second full time programme in September. We will now have the two-year MPA and one-year MPP. We’ve got two executive part time Masters, one which is open admission and one aimed exclusively at the UK civil service, and we’re also thinking about expanding that, in the sense that we want to help governments around the world build their own human capital. So we are in preliminary conversations with about half a dozen countries around the world about helping them train their own public servants.”  He doesn’t want to give me the names of these countries, but he does tell me that there are at least a couple in Asia, Europe and Latin America.

Aiming to provide an appreciation of the public face of modern policymaking, the School is adding courses in political communication and political philosophy to its offer. “Clearly being a policy leader in the era of Twitter and Facebook is not the same as it was when all debate was had in newspapers.”

During his tenure as Minister of Finance in Chile, from 2006 to 2010, he was widely hated – and then appreciated – for hiding away more than 30% of the Chile’s GDP growth from restless taxpayers. When the 2008 crisis was in full force, the reserves were used for cuts, subsidies and other projects aimed to manage the crisis. He then became one of the most revered ministers in Chile.

As he is quick to point out, Velasco’s profile as a policymaker and academic is not new to the LSE. “The LSE is unusual among leading universities in the world in the fact that it has high academic standards but also is in persistent dialogue with the private and public sector.”

“I’ve seen the policymaking process from both ends, from the perspective of somebody who is sitting in an office like this one helping craft solutions, and the person who is up there in congress trying to negotiate a deal, or up there in CNN to explain what the deal looks like.”

Velasco doesn’t shy away from public engagement. In the last month, he tells me, he has travelled to seven countries on three continents. Starting a new School requires a lot of advertising, including public speaking engagements, meetings with alumni and governments. The school seems to be on track to meet its objectives, but its success will be measured by how it stacks up against leading Public Policy centres in other universities in years to come.

Recently, Velasco has focused his more personal engagement on the issue of populism and has written extensively on the current political crisis in Venezuela. “You and I are both from Latin America” –  yes, I’m Uruguayan – “so we are aware that populism didn’t start yesterday. I only half-jokingly tell people in London that [populism] is one of Latin America’s biggest non-traditional exports”

While he worries about the impact of populism on the quality of public policy, Velasco also stresses how much of a threat it poses to democratic institutions.

“Populism has two sides: the kind that has been most common in Latin America is economic populism, based on short-term results and completely disregarding future consequences.”

But additionally, it is a challenge to democratic policy. Liberal democracy is about the rule of the majority, but it is also about pluralism, recognizing different points of view, delegation of representation and also about the recognition and respect of minority rights. Populism denies pretty every item of that list.

In his thoughts about populism, Velasco speaks with the authority that perhaps only Latin Americans can exert, having personally dealt with populism for much of his career. Whilst he has lived all over the world, Velasco retains deep ties with Chile and the rest of the region. However, Latin Americans at LSE, especially students, sometimes feel that the university does not focus as much on the region as it should. There are little to no partnerships with Latin American universities, and course offers, at least at the undergraduate level, within the region are scarce. When I ask him about this, Velasco adds some political nuance into the mix.

I’ve been around universities for about 25 years, and I have found that it is difficult to talk about the LSE just as it is hard to talk about any university. I was asked this question when I was at Harvard and my answer was the same, universities are by definition decentralised, and the central authorities do not and should not mandate the kind of research and research interests that the faculty have. So, the question is are there enough people doing research about Latin America and could there be more? If there aren’t enough why [is that]?

He then adds an academic – and somewhat more personal – qualifier: “I think that there is a pretty healthy contingent of researchers doing work about Latin America. We have to recognize as Latin Americans – and this is not a comment about the LSE, but about Latin America – that [it] does not have a lot of salience in world debates.

“Every time I go home, people ask me what others are saying about Latin America. My honest answer is always: ‘well not very much.’”

I ask Velasco about the now infamous globe. He limits his comments to the parallel between it and America Invertida, an illustration of an upside-down South America by Uruguayan Joaquin Torres Garcia that would become a symbol of protest and self-assurance for many in the region.

As I leave, the dean and I fall back into Spanish as we exchange pleasantries. Andres Velasco is a busy man, but he says he likes what he does, and it shows. Time will tell how the School of Public Policy will do. For now, it seems to be in capable hands.

PrevPreviousLSE reckons with its student satisfaction problem
NextAs it looks to the future, LSE renews focus on teachingNext
On Key