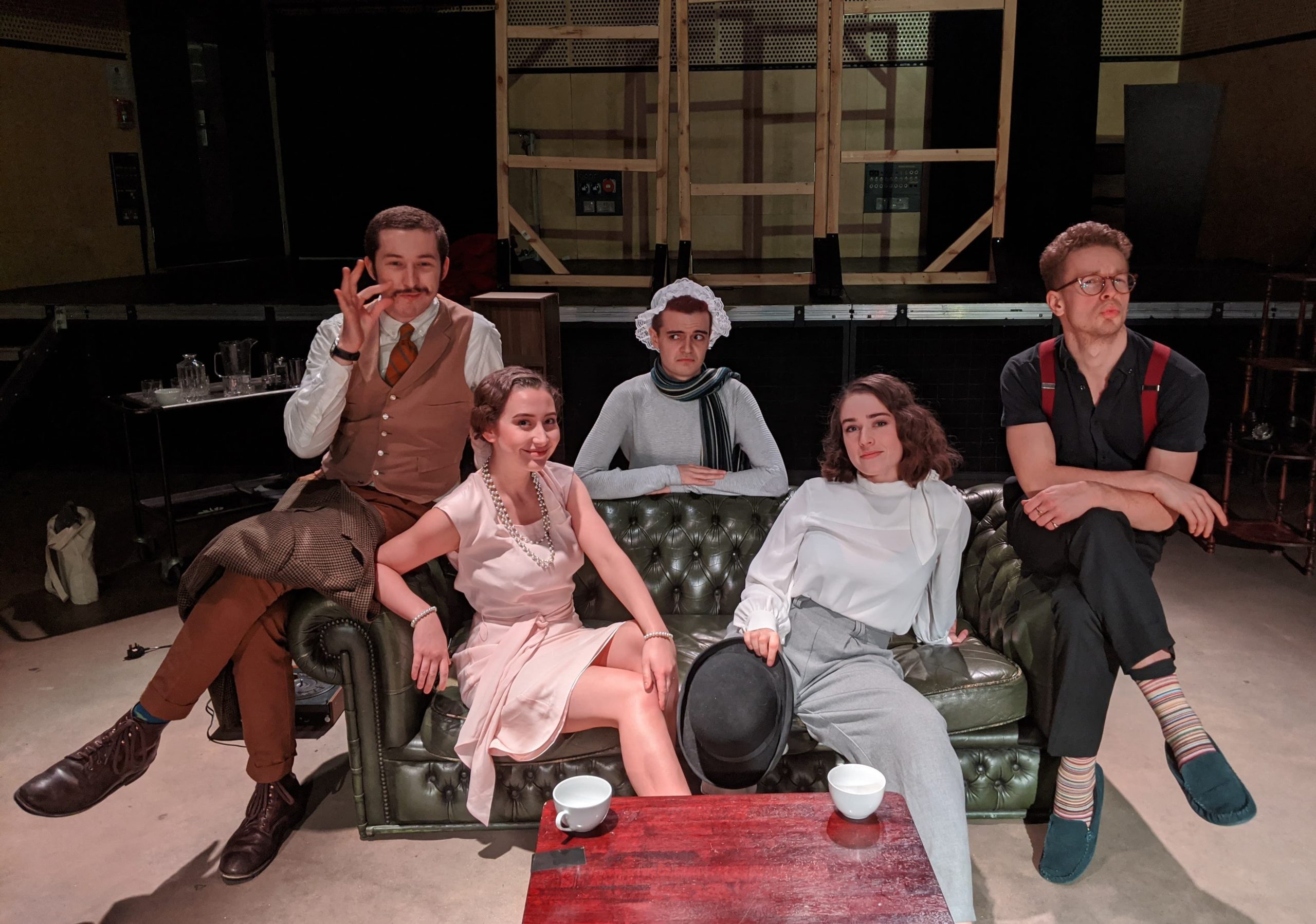 Private Lives, Noël Coward’s delightfully outrageous comedy, was first performed in the year succeeding the Wall Street Crash when the majority of the Western world was plunged into economic depression. The play has been charming audiences since, with Coward’s trademark high-society, upper-class camp and wit. It is now the turn of the LSE SU Drama Society to bring it to the stage.

The play follows two married couples – Amanda (Anna Chedham-Cooper) and Victor (Jamie Boucher), and Sibyl (Laura King) and Elyot (Percy Fagent) –  who are honeymooning at the same hotel. A chance encounter on a balcony reveals that Amanda and Elyot were previously married – hardly ideal. Inevitably, after revealing they still have feelings for each other,  chaos, hysteria, and a classic Cowardian comedy of manners ensues. Anthony Ghassemi’s performance as Louise the French comedy maid, albeit small, possesses a scene-stealing skill.

I asked co-director Ameena Hamid whether this subject matter feels too (and I hate to use this word) ‘fluffy’ following the Society’s previous runs of Enron and Emilia – two deeply political plays. Whilst she sees the value in more ‘serious’ plays Hamid is quick to stress the complexity of Private Lives: “As much as it is a comedy, there’s a lot about loneliness and a lot of critique in it… There are a lot of funny moments but there are a lot of dark bits as well.” She also points out how tragic Coward’s life was and how he uses the play, ostensibly a comedy, to skewer the hypocrisy and arrogance of the upper class. On a happier note, Hamid effuses about the “stellar” cast, a feeling shared by her co-director Azaad Sadiq. Sadiq praises his “amazing co-director and crew” and commends the “greatest actors [he’s] had the privilege of working with,” describing the high level of theatrical ability as a “unique joy.”

The dialogue is extensive: a true achievement of Coward’s monumental wit and vocabulary. However, for performers, this poses a real challenge. If there was one weak link in the cast, it is safe to say this play would be truly unwatchable. Thankfully, the cast don’t put a foot out of place whilst confidently and humorously filling the stage. Chedham-Cooper is shimmering as the bohemian Amanda; a whiff of scandal surrounds her like Chanel No. 5 and her rejection of traditional feminine roles is executed as expertly as her red lipstick. King is marvellous as the prim and insistent Sibyl, who deftly portrays both her child-like emotions as well as her reliance on the traditional social order. The male leads are similarly graceful: Fagent is perfect as the louche and caddish Elyot (a character styled after Coward himself) whereas Boucher adroitly embodies the slightly dull yet fundamentally kind Victor.

Despite first being performed ninety years ago, the production team allows the issues and interactions to feel remarkably modern. The plotlines surrounding domestic abuse (which in the thirties were purely a comedic device) serve to immediately silence laughter in the audience. The production which so ably makes us laugh then plunges us into discomfort. This sharpens the previously fuzzy peripheries of the work and in doing so provides four real character studies which are endlessly fascinating to unpack.

Similarly fascinating is the dichotomy of the two female characters. King and Chedham-Cooper deliver a side-by-side comparison of two paradigms of femininity whilst exposing the societal constraints with verve and vigour. Whilst ostensibly providing slapstick in the second act, Fagent and Boucher contribute a telling narrative on masculinity. To deliver this through non-stop dialogue whilst simultaneously providing constant laughs, is a testament to the cast’s sheer talent.

Significant praise needs to be given to the rest of the production team. The lighting design by Jo Parker makes the stage feel like you’ve stepped into an intimate hotel room. Additionally, Ellen McLean’s costume design is sumptuous and makes me covet flowy thirties chiffon dresses. Set designer Sharon Zheng cleverly manipulates the space so it at once feels private but is hugely engaging for the audience.

A particular audience favourite was “Don’t quibble Sybil!” in response to Victor making small talk about how funny it is that the South of France has become such a popular tourist destination. Elyot drily replies, “Yes, I haven’t stopped laughing for weeks.” It is no wonder that in his diaries, Coward once noted the following: “The critics described Private Lives variously as ‘tenuous, thin, brittle, gossamer, iridescent, and delightfully daring.’ All of which connoted in the public mind cocktails, repartee and irreverent allusions to copulation, thereby causing a gratifying number of respectable people to queue up at the box office.”

I implore any respectable person at LSE to queue up to watch this production for a delightfully daring and witty evening.

Tickets are available for the Tuesday 18th, and Thursday 20th February shows of LSE SU Drama Society’s Private Lives. Tickets can be purchased at £3 for Drama Society members, £5 for students, and £8 for members of the general public.