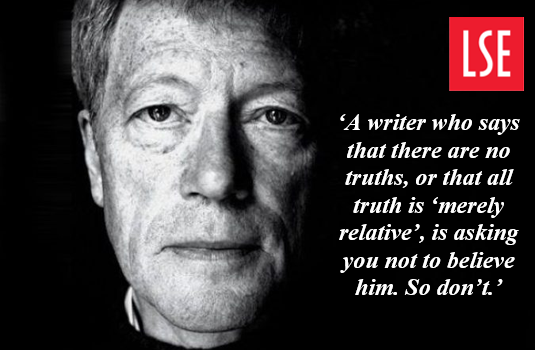 How is Sir Roger Scruton’s legacy intertwined with the LSE?

Last week, the world lost one of the most well-read, creative, and impassioned people to ever grace the earth. He wrote plays, books aplenty and contributed more to the intellectual discourse amongst average people than most academics could ever dream. The death of Sir Roger Scruton may please some – certainly, he held views that were heterodox to the current liberal discourse and that make you wince. However, when you explore his work, you find a contemplative treasure trove that changes the way you view the world. The greatest conservative thinker of our age – a title that may make you recoil in horror, but listen openly dear reader. Whether LSE students, staff or faculty, here’s what I think you can retrieve from the work of a friend to us all.

LSE’s three pubs lend a certain credence to the view of our university as a social campus. We can be a campus of drinkers: Sir Roger gave us a great deal to think about. His book ‘I Drink, Therefore, I Am’ (2009) explores the connection we share with wine. The soil it is grown in, infused with the history, passion, and company in which we quaff, all contribute to a culture which is, though not good for the hangover, certainly good for the soul.

LSE is a university for thinkers. Sir Roger’s intellectual works on Kant, Spinoza, Zizek and Wittgenstein (to name but a few) should be the basic text books of many students. Not only was he regarded as an expert, lecturing at our fellow scion of the University of London (Birkbeck), but he allowed his knowledge the flow through his other work. His thought, like his philosophical exercise, was like LSE: truly international.

LSE is chocabloc with photographers and Instagrammers. There seem to be more cameras on campus than people. LSE is proud of its architecture, and rightly so. Sir Roger’s academic specialism in aesthetics landed him as chairman of a Government commission. The beautifully written ‘The Aesthetics of Architecture’ (1979), ‘The Aesthetic Understanding’ (1983), and ‘Beauty’ (2009) explain why objects look and feel so good. You will find yourself, upon reading, encapsulated in a new understanding of your environment, in Holborn and Kingsway. Taking photos of the NAB will never feel the same again.

LSE has a strong religious community. Although myself a member, I think my humanist peers should find time to reflect on what we mean by sacredness and divinity. In Sir Roger’s ‘The Soul of the World’ (2014), he reflects on how we see reflections of human nature in everything, how sacredness is felt and why we should value it. Of any book in this long list, it is this one I would plead with you to read the most.

Environmentalism at LSE is incredibly strong. I often find myself sparring with Isabella Pojuner and Colin Vanelli, both of whom conducted fearsome and tireless research in their battle for greater environmentalism. I often find myself on the other side of the divide when it comes to global warming, but we are united in our fight for environmentalism. Sir Roger’s ‘Green Philosophy’ (2012) fleshes out a conservative approach to environmentalism, through a love of home, individual actions and the market. To my socialist and green peers, this book may not change your mind on solutions to climate change, but it will certainly build coalitions with those of us on the right who wish to help in your battle.

Students from the country can often feel at odds with the LSE’s metropolitan culture. Sir Roger’s introspections into the countryside can swiftly move you from the dirty streets and constant pollution to the serenity of the countryside. In ‘On Hunting’ (1998), Sir Roger convincingly defends hunting in the countryside, and explains why we are so closely drawn to the horse as our bestial best friend. Without a doubt, this book makes one feel at ease with their concrete trappings here in London, knowing that liberation lies just beyond the M25.

Students from Eastern and Central Europe are numerous at the LSE. Our academics and students share in LSE’s rich connection with this area of Europe. The namesake of the LSE Hayek Society was accompanied by fellow Austro-Hungarian Karl Popper at LSE. During the period of tyranny beyond the Iron Curtain, the freedom of our potential students was curtailed by the heinous crimes of communism. Sir Roger smuggled books into Prague and taught at their Underground University. He was a hero to the resistance there, presented with a plethora of merits and medals by their current governments in thanksgiving. Sir Roger’s semi-autobiographical fiction, ‘Notes from the Underground’ (2014) recounts this terror and how true action, something that inspires many students here at LSE, can change the world for the better.

Finally, for LSE’s Faculty. Sir Roger was part of your family, of bright, contemplative thinkers and writers who have left their mark on the world. I ask you humbly to read some of his work. It is joyously written and can transport you from this jungle of steel and glass to a more pleasant land. And please recommend him to your students, whether they are philosophers, financiers, political scientists and theorists, or just students looking for well-written thought for our age.

Sir Roger Scruton died after a painful year of cancer and the New Statesman intentionally smearing him after an interview. But his work will continue. His death was a lachrymose affair for me, and I wanted to honour him in a way which would share his beautiful work. I’m a free-market Libertarian: we were at odds over economics, the nation-state, social values and a manner of other subjects, but he changed my thought and life for the better. He will do the same to you.