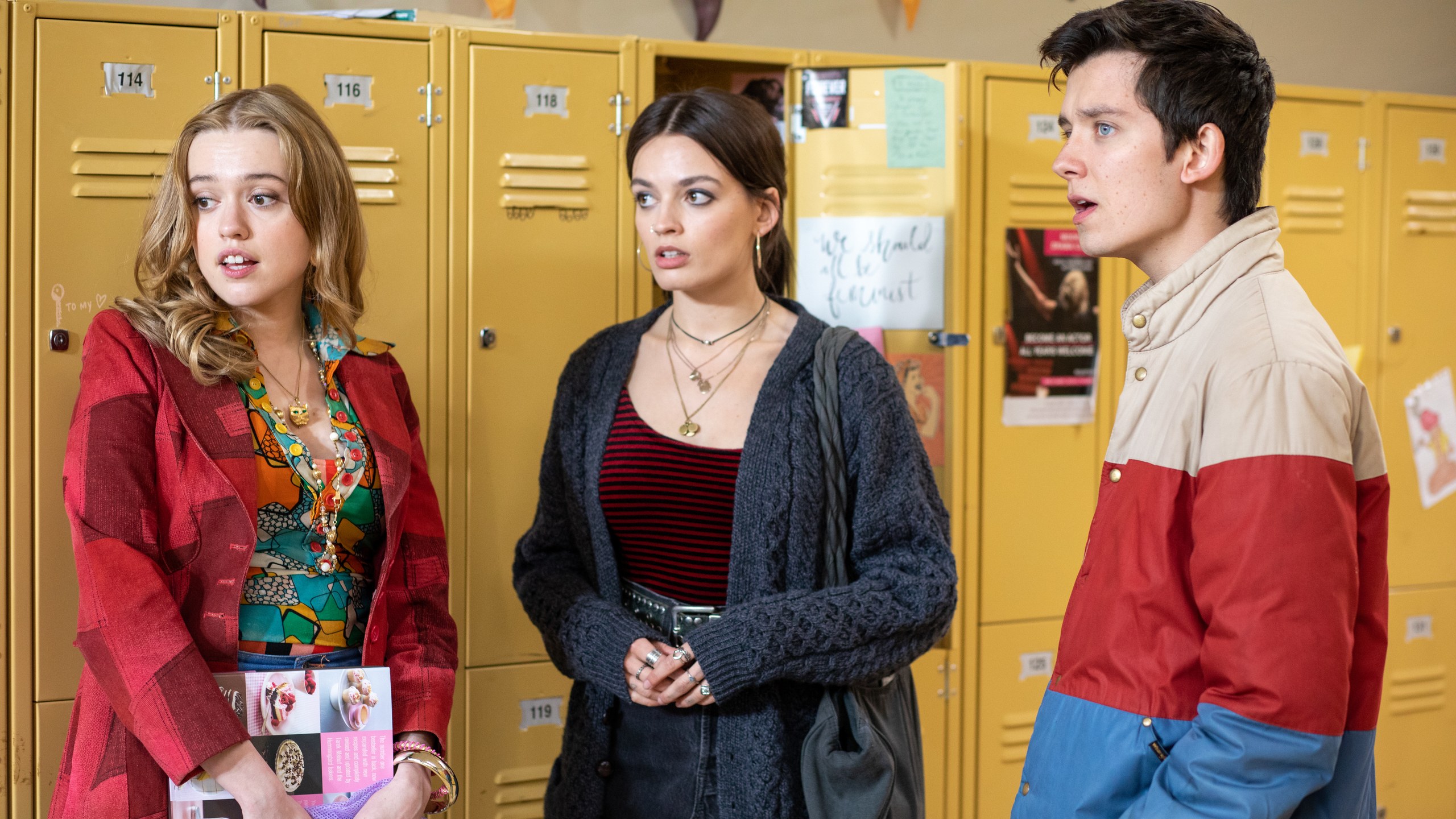 Sex Education season one was pretty great. I remember it being good-looking, sexy, cool, aware, and honest, whilst, yes, giving the teenage experience a little too much credit. I didn’t leave my teenage years all that long ago. I certainly remember wanting to romanticise that time in my life, and the show picked up on that. I loved the relationships and characters that developed on-screen.

Season two was disappointing from the outset. It took me three days to get through the first episode. I wondered if it was impossible to escape the shadow of the first season, or if it really was just a bit shit. I think both.

Most crucially, the characters seemed completely different from their season one selves. Then there are the off-putting structural differences, way too many bloody love triangles, and the aesthetic of the show which all make the sex chat seem like a dim afterthought. Episode one was excruciating. I texted Amber – my fellow Review editor – to share my exhaustion and emphatically state that this would not be getting a write-up and that was that.

I did eventually watch more. Soldiering on because of my residual affection for characters from the first season allowed me to indulge in more shitty high school love stories. The cast is still wonderfully talented and the show maintains a refreshing level of maturity regarding sex. One moment jumped out at me: a character has to navigate the obnoxiously gendered and invasive process of picking up the morning-after pill. Beyond the half-baked storylines, the season definitely has something to offer and eventually gains momentum.

Adam’s return brought back season one nostalgia. Whatta man. What. A. Man. I watched the first season of Sex Ed with my high-school best friend; we binged the whole thing on her bed in Bath whilst gorging on cheese toast and taking breaks to dance to Billy Idol. The Adam/Eric scene in season one – you know the one I mean – had me squealing and her rolling her eyes. “He’s a bully, Zehra. This is problematic, not romantic.” She wasn’t wrong – she rarely is.

This season, Adam grew. It was really, really lovely to see. There was a lot of character growth: Otis’s dad was surprisingly self-aware for an absentee father. It made me wonder how much arseholes can genuinely grow. Whilst there is merit to showing the humanity of these characters, it felt unrealistic at times. In the words of Ciara (the aforementioned season one-watching pal): “I do love discussing Adam. What an annoyingly problematic boy.”

Beyond Adam, Aimee’s journey was unexpectedly solid. Whilst not necessarily perfect at addressing sexual assault – which may not even be possible to do – this storyline was far more realistic than other fictional depictions I’ve seen:

“So you can’t get on the bus because you think that man is going to be on it again?”

“No. It’s more that he had this really kind face. I remember because he smiled at me and he didn’t look like some wanking psycho killer. So it’s like if he could do something like that, then anyone could. I always felt safe before. And now I don’t. It probably sounds stupid.”

And the bus scene. Fuck. Yes, it was an overly simplified obvious ‘girl power’ solution to an incredibly complicated problem. But before that silly shot of five girls at the back of a bus, when Aimee got to the bus stop and found them all there: “What are you doing here?” – she’s welling up, I’m bloody welling up – “Getting the bus. We’re all getting the bus.” Seventeen by Sharon Van Etten is playing in the background – ooh baby, you got me.

As the show is so crowded with storylines and subplots, Aimee’s assault couldn’t be a main focus. But in this instance it worked to effectively communicate the way much of life keeps going after assault. But then something like a bus (for Aimee), or a specifically coloured hoodie (for me), specific moments when you’re alone (for everyone I’ve spoken to) snaps you back to that moment. It’s shit but then you have to be living again and it becomes background once more.

Despite these almost-perfect relevant and incredibly important moments, they were drowning in the quarter-cooked storylines and character arcs surrounding them.  Such a shame. I HATE wasted potential. It makes me very angry.

On a tentative, conservative first attempt, I counted twenty-three core characters who were a part of central storylines. TWENTY THREE. You do NOT need to have gone to film school to understand that this might be too large for any show to digest properly. The worst part is that each has a substantive storyline. How can a show talk about Jackson’s mental health properly while also giving enough time to Mave’s mum’s drug abuse? Or follow Otis’s and Adam’s family drama and Jean’s heartbreak, whilst tactfully dealing with Aimee’s sexual assault and allowing Ola, Lily, and Adam’s sexual consciousness to manifest naturally? It can’t be done and season two doesn’t do it. UGH.

So, is season two worth a watch at all? Mm – I don’t know. I would still recommend season one to literally everyone, and it is difficult to not continue when you’re a season in. It also isn’t a complete disappointment: I enjoyed it enough to finish it, albeit over two weeks as opposed to a weekend. I’m also looking forward to another season. But I would still call this one a failure, which sounds harsh, I know, but doesn’t feel unwarranted.

Ooh quickly, final thoughts on the last episode: Stephen Fry: I love you! Isaac: fuck you.