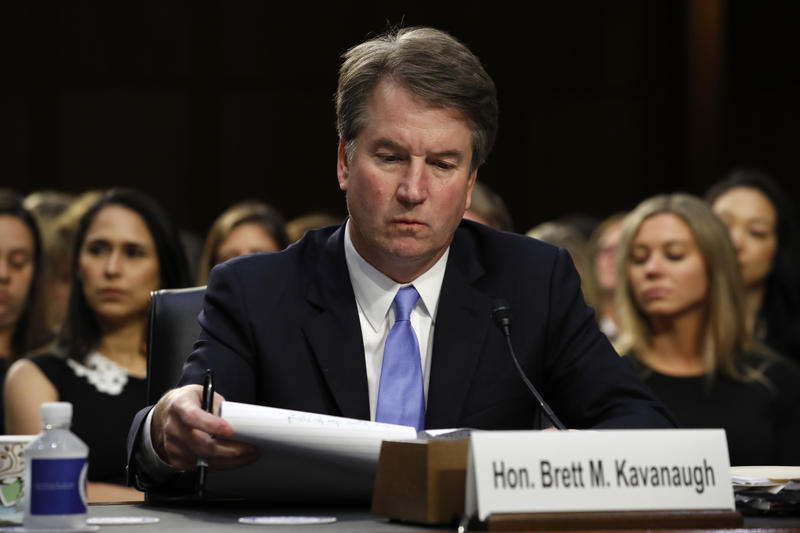 The Case of Kavanaugh

What makes this issue so complicated and emotionally charged, for me at least, is that it seems to consist of innumerable layers, each one further confounding the discursive distinctions between public and private, bureaucratic and intimate, legal and moral by which we generally moderate our political discussions.

I first came across the phrase ‘overdetermination of women’s selfhood’ in Janet Boddy’s work on spiritual possession in Northern Sudan and had a hard time comprehending what it meant in its ethnographic context (anthropologists have a tendency to create unnecessarily multisyllabic words for nuanced theoretical concepts).

Listening to radio, TV reports, and podcasts on the continuing political battle over Kavanaugh’s potential appointment to the US Supreme Court, I felt I finally understood; really, it hit me like a tidal wave, washing away all delusion of ‘how far we’ve come’ as a nation.

It’s hard, when you hear a victim of sexual assault repeatedly being referred to as an ‘accuser’, to assert that women have control over their identities in the public sphere of politics, a world still dominated and determined largely by white men. The very vocabulary of our legal and political system, written by men and historically modified and upheld primarily by men, has masculinised politics beyond our ability to extricate sexism from the institutions of the state.

Here are just a few examples of this phenomenon playing out in the context of the current Supreme Court debate:

It seems that the first line of defence against the ‘accuser’ of sexual assault is almost always framed as ‘How can we know she’s telling the truth? and ‘Where’s the proof?’. I think we can all figure out why it is logistically close to impossible to obtain, so many years after the fact, definitive proof that a young man attempted to rip the clothes off a young woman with the intent of raping her.

The definition of evidence itself, as has been established by the precedent of the courts, is not equipped to handle situations of alleged sexual assault and harassment – reason why so many cases have been dismissed as ‘he said, she said.’ What little discretion juries have to determine cases on the basis of emotional impact and individual testimony is always clouded in doubt and criticism.

What is cast into doubt in these cases is not the legal bases upon which our justice system convicts or doesn’t convict, rather it is the woman’s character herself, her identity as a ‘truthful’ person which is either negated or upheld by the outcome of the decision. In the case of a determination of ‘untruthfulness’ a woman is dismissed as manipulative, emotionally unstable, weak, yet conniving. In the case of a ‘truthful woman’, she is upheld as an example and pitied as innocent victim, called ‘brave’ in a way that implies an internal struggle against her ‘natural’, ‘feminine’ weakness and humility.

The ‘truthful woman’ is a status almost impossible to obtain once such an allegation of sexual assault is made public (and thereby inevitably made political). It seems that, by entering into the political sphere determined since its conception by male voice and action, female ‘accusers’ lose any stable ground to stand on.

They must fight for their truth to be heard amongst the many voices shouting alternative truths, twisting words, reading hidden motivations into them. A political woman cannot be ‘truthful’ or ‘pure’ within our masculinised vocabulary because she has tainted herself by her mere presence in a world in which she does not belong.

The ‘public opinion’ of women

Against and despite the polarised, partisan backdrop of modern American politics, women are being referred to as a homogenous bloc over whose support Democrats and Republicans are battling. Discussions about which side will gain the favour of ‘American women’ assumes, quite blatantly, that those doing the fighting are not women; again, we see that the default in American politics is the masculine.

The woman must always be explicitly defined and evoked; in the last national election, for example, the question of which candidate would be more effective in rallying the ‘women’s vote’ was often posed by both sides, and they were often presumed to favour Hillary Clinton on the basis of her gender alone.

For me, the references in political discussions to women as a voting/opinion bloc blatantly advertises the discrepancy between the composition of our national government (20% women in Congress) and our actual national demography (51% of the US population).

Anthropologists commonly oppose any kind of totalising assumptions about entire groups of people, and although I admit that statistics and generalisations are necessary for policy-making, 51% of the US (about 165.25 million people) is clearly too large a population to be generalised about in any useful way, and especially by a legislative body that is 80% male.

More importantly, sexual assault shouldn’t just be an issue which draws the attention of women or those who have experienced sexual harassment themselves; it should be a call to action for everyone because, as politically divided as we seem right now, I honestly believe that no-one truly condones such extreme degradation.

The strategic use of women in the political sphere

An all-caps headline underlining a recent CNN TV report on the subject stated that the Republicans’ defence of Kavanaugh in the hearing would ‘rely primarily on a woman’. A day later, I heard on NPR that ‘several women’ had come out expressing their support of Kavanaugh and vouching for his character (his wife has publicly stated that he is a great dad).

There has likely been a scramble in Kavanaugh’s camp to create a foolproof plan to return their guy to the public’s good graces. The solution, of course, is to supersede the testimony of (only) one woman who has ‘accused’ him of sexual assault with the testimonies of other (more!) women who say he’s actually a decent guy. Whoever has more women on their side wins, right?

Wrong. Women, too, have political motives (shocking!) and spouses are often NOT the most objective character references (if they made a habit of publicly telling the whole truth about their partners they probably wouldn’t be married anymore).

Women are not tally marks on some moral balance sheet to prove that one side or the other is more ‘progressive’ or more equitable or more sensitive to ‘women’s issues’. Women are people. We’re all just people. Let’s leave it at that.

The worth of women’s suffering

When the story first broke, the media seemed to focus mainly on the figure of Dr. Blasey Ford, how legitimate her claim could be, what proof she had, if there were any corroborating witnesses, why it took so long for this information to come out. Now, about two weeks in, it seems like the discussion has turned from one of ‘Is she telling the truth?’ to one which almost assumes that she is.

Certain defenders of Kavanaugh have expressed the view that an assault that was performed by a teenager shouldn’t be considered a real crime. Whilst I find this view abhorrent and heinous on all possible levels, let’s just entertain the argument that there should be some kind of ‘statute of limitations’ on what Kavanaugh did in high school. Statutes of limitations are legitimate legal principles applying in criminal cases, and I think they were created as such for good reason.

This argument, however, is dispensable because this is not a trial; this is the approval process for a Supreme Court justice, the highest position within the US judiciary – a person who is supposed to encapsulate the values of justice, circumspection, and integrity which our government claims to champion.

In Kavanaugh’s approval as Justice, we are saying that the best we can do as a nation, our very finest specimen of American-ness, is an accused sexual aggressor. And yes, I am aware that our very highest ranking national representative, the President, is a sexual predator. Let’s not make it a pattern.

How people tell their stories

Lastly, I’ve been putting the term ‘accuser’ in quotes because, although it has been used by liberal and conservative sources alike, I feel it contains connotations which paint an inaccurate and offensive image of Dr. Ford and all others who say they have been sexually harassed.

She is not some angry, finger-pointing woman with a pinched face and a thirst to see her would-be rapist get his due. She anonymously recounted what she remembered Kavanaugh had done to her to Senator Feinstein a few months ago with the express desire not to create a media firestorm, which she knew would make her life immeasurably more complicated and uncomfortable. She didn’t ‘accuse’ him or ‘judge’ him; she recounted a memory to a confidant whom she trusted to handle the story sensibly and respectfully.

We need to think more in general about which words we habitually employ to characterise people, because our words themselves are capable of telling stories – stories that can contradict in dangerous ways the realities they are meant to express.

Even more urgently, we have the responsibility to reexamine the frameworks which constitute our political worlds and expose the means by which they determine who we are allowed to be over who we know ourselves to be.