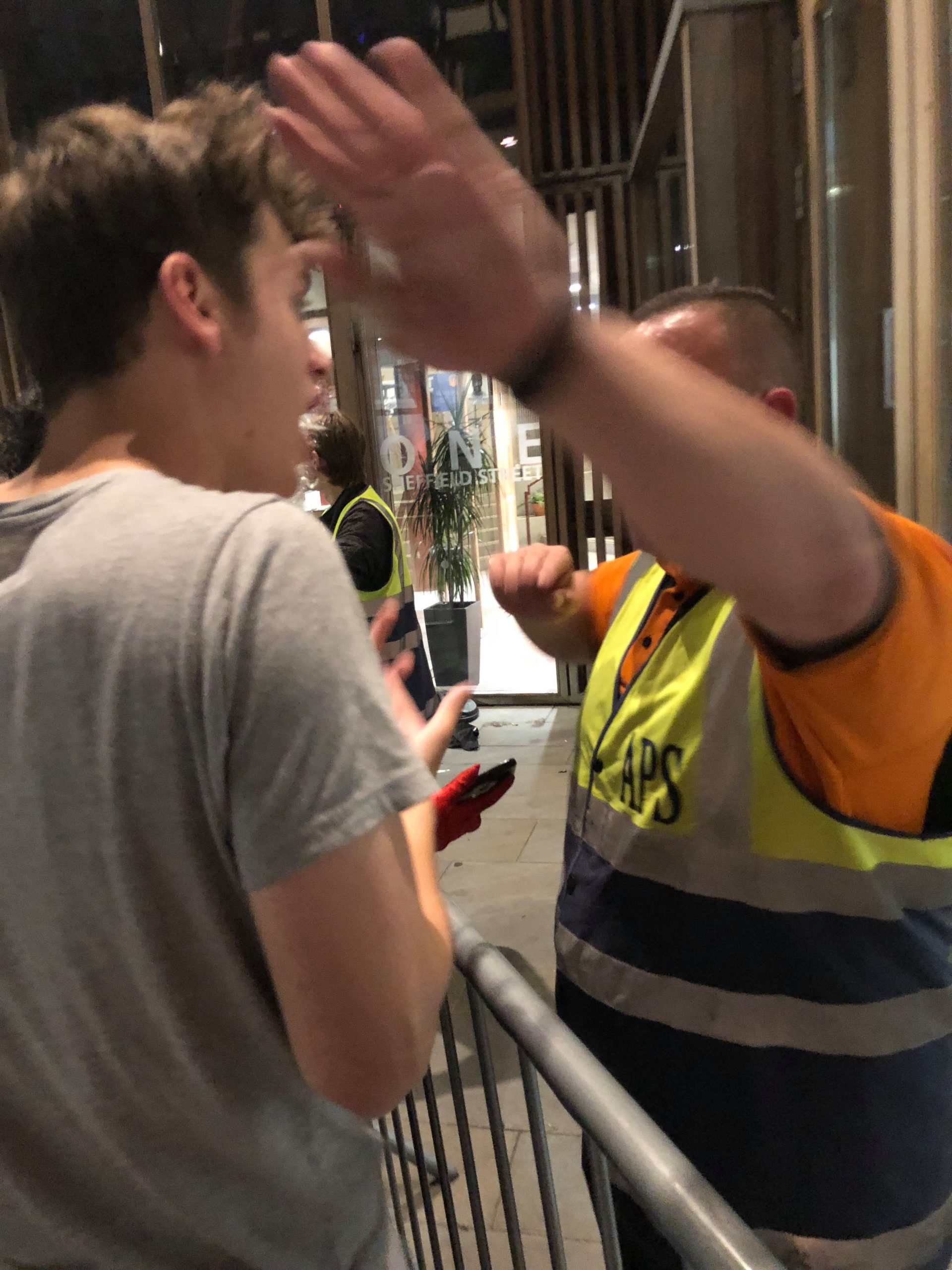 “Shambles”, “utter disgrace” and “worst event I’ve ever been to” were just a few of the comments made after Wednesday’s AU welcome party.

After being a heavily publicised and sold-out event, the AU welcome party  ended early due to “safety concerns”. These ‘concerns’ came about by the lack of organisation of the new security team in place.

The queue for the entrance comprised of two checkpoints: an ID check and a bag check/metal detector. The first checkpoint moved relatively quickly. The security in the second checkpoint asked that people be scanned in one by one. This led to huge bottlenecking issues as people were ushered in quickly only to be stopped at the detectors. People crowded around the entrance and yet more people tried to slip in from the sides. With no more space to move, the security team stationed near the detectors shouted at everyone to ‘move back’ – all whilst people from the other part of the queue were still being moved forward.

This caused even more chaos as the crowd was pushed forward and back, barriers were knocked over and people were hurt.

In a surreal turn of events, a fight then broke out amongst people dressed as Peter Pan (hockey), Ninja Turtles (Futsal) and people dressed as ‘average joes’ in yellow (dodgeball). There were also accounts of people punching the security and spitting – these people were later escorted off the premises. The confusion, violence and mismanagement further hindered people from being let in. An estimated 100  people were let in the building last night (although the security team disagree, saying about 500 people were inside the venue). Many people left the queue, choosing to go home or to wait out the chaos in Shakespeare’s Head down the road. The AU tried to rectify the poor management by suggesting people go to Zoo instead. This received many angry comments as people felt ‘cheated’ for paying £9 for an event they were not allowed into, only to pay another £3 for Zoo entrance. The fun of the Heroes and Villains night seemed to have descended into a more serious situation altogether.

What has been said about the night?

People have called the new security team ‘unprofessional and aggressive’. One student, employed by Tuns, told the Beaver: “The new security team were extremely rude and couldn’t handle a student event. [They] wouldn’t let a friend of mine get his bag and then squared up to him even though he does work at Tuns. I went over to vouch for him and they started having a go at me too. Such a shambles”. When interviewed yesterday by The Beaver, the student said that they both took up their grievances with the security team with the Student Union. It reportedly turned into a “‘shouting match”’ resulting in their termination of employment at Tuns.

Another student posted on the Facebook event calling it “probably the worst queue I’ve been in”. There were many accounts of students feeling unsafe and wanting to leave.

The Beaver received reports from several organisers of the event, who said there was a lack of respect and communication between the event organisers and the security team. Reports say that the security team were calling LSE students in the queue “animals”. When event organisers tried to negotiate a different plan of action for the night, reportedly some security members replied “stop telling us what to do” – again, some felt this entailed a lack of respect from the hired companies towards the student body.

The security were interviewed and said that they “followed the book” and have defended themselves by saying they have run “bigger events than this” before. Students and organisers have criticised that the decision to shut the event down and little communication between the two checkpoints showed “very little intuition on the part of the security team”.

What is being done about it?

The AU have issued a response  yesterday , stating: “We’re just as disappointed and frustrated as you are in the outcome of this event and the issues with security. We’ve began discussing all problems with the SU and will inform you within the next couple of days of the conclusion.”

They are also trying to secure refunds for those affected and will release a statement by next Wednesday of the outcome of this request.

In a pleasant conclusion to a hectic night and enquiry, people have jumped to the AU’s defence stating that “AU EXEC themselves didn’t hire the security”and that the AU exec are “are students as much as anyone else, and probably wanted to enjoy their evening as much as you did.”

Investigations are still ongoing and the AU exec are yet to release their reports about the incident.