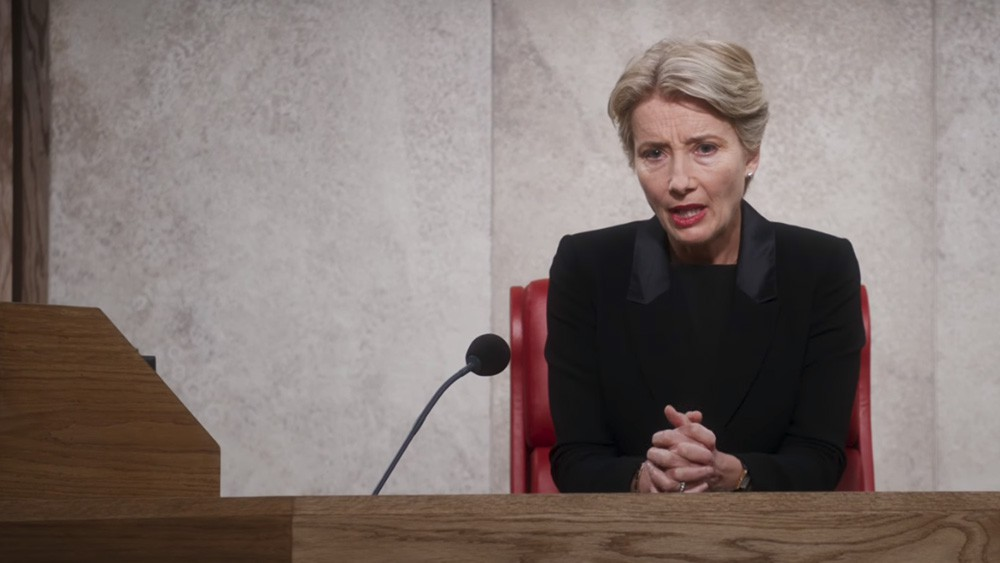 Based on Ian McEwan’s 2014 novel, The Children Act centers around Crown Court judge Fiona Maye (Emma Thompson) who is given the onerous task of whether or not to keep a 17 year old Jehovah’s Witness alive, against his will, by allowing a blood transfusion that will save his life.

The first 30 minutes of this film are excellent, a fascinating insight into the British judicial system, whilst also highlighting the importance of balance in everyday life between work and family. We see this in the deterioration of Maye’s marriage with academic Jack (Stanley Tucci), who, due to Maye’s emotional distance, begins to consider having an affair.

The film kicks off when Maye is faced with a make-or-break ruling. Struggling to determine the outcome of a blood transfusion case, where Adam, a young Jehova’s witness (Fionn Whitehead) is refusing treatment on religious grounds, Maye decides to go to Adam directly to gauge the boy’s intentions.

These sequences carry a sense of realism and sincerity, making the film’s later regression into melodrama all the more frustrating. Maye’s meetup with Adam is the beginning of the end for this film’s hope of conveying a powerful message. After an embarrasingly twee sing-song between the boy and the judge, the film becomes cheap, unrealistic and frankly, uncomfortable.

At every turn, the plot aims to elicit large scale debate topics. Freewill, the priority of family, the ethics behind the judicial system and the importance of dignity are all touched upon heavily. The execution of these ideas, however, is lacking. ‘The Children Act’ frequently serves to undermine its own themes, conveying them in a crass and predictable manner. After the hospital scene the film quickly becomes disjointed, whilst the delicately introduced topic of Fiona and Jack’s marriage is turned into an irrelevant sub-plot. Adam’s subsequent stalking of Fiona (for ‘saving his life’) becomes awkward and embarrassing.

‘The Children Act’ can’t be penned as a catastrophe: the cinematography of London was exceptional and the insight into the British legal system was suprisingly engrossing. Moreover, Thompson did a sterling job as the Austere Maye. Tucci and Whitehead similarly shone. There are some well delivered scenes: the actual court case itself felt authentic, whilst the scenes with Maye’s clerk were very witty and satirical.

Overall, Richard Eyre’s directing sees a inconsistent mishmash of scenes; some excellently coreographed, others- predictable and uncomfortable. ‘The Children Act’ is watchable but frustrating and doesn’t do its weighty topics the justice they deserve. Despite some solid performances, ultimately the film proves a sorry act.

PrevPrevious“Bet you thought you’d seen the last of me.”
Next“Killing Eve”: Slay or be SlainNext
On Key