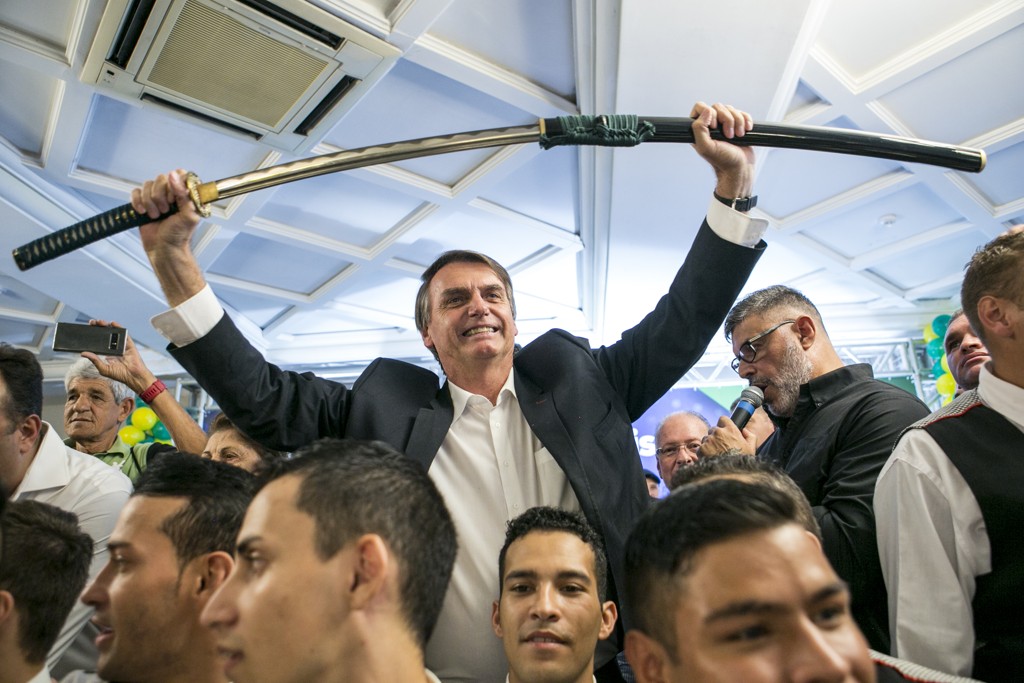 This Is Just The Beginning For Global Trumpism

Features Editor Andrew Solender analyzes the trajectory of far-right, populist movements in Europe and around the globe, and sees no end in sight for the decline of Western liberal democracy.

There was a moment, last year, when the tumult and havoc of our present political era seemed to have finally stilled, if only for a brief and fleeting period. Anti-populists, leftists and centrists alike breathed their first sighs of relief in quite a while when self-professed “radical centrist” Emmanuel Macron swept to a landslide victory against far-right populist Marine Le Pen in the 2017 French Presidential election. This came as a welcome development to international onlookers, especially after pundits downplayed Macron’s chances of victory in the wake of the Trump and Brexit upsets (despite Macron holding consistent double-digit leads in every poll, something neither Hillary Clinton nor the remain campaign ever managed to do). Macron’s victory was, it seemed, a stunning and much-needed rebuke to the Trumpian forces–right-wing populists with a 1984-esque authoritarian flair–wreaking havoc on democratic nations across the Western world. But it was not to last.

Consider the West as it stands today.

Donald Trump still reigns mostly unchecked thanks to undivided Republican control of every branch of government. While the Democrats are poised to retake the House of Representatives, it’ll be but a dent in the substantial and consistent gains Republicans have been making for the better part of the last decade. Britain seems to be careening towards a ‘hard brexit’ thanks to the unpopularity of Theresa May’s chequers plan and the growing strength of hard-leavers like Jacob Rees Mogg and Boris Johnson, with meek opposition from Labour and the Liberal Democrats. Across the channel, the outlook only worsens.

While countries like France and the Netherlands have, as yet, managed to stave off frightful bids for power by far-right, islamophobic, and even white supremacist political movements (though it should be noted that the far-right Party for Freedom is the second largest party in the Dutch Parliament), liberals in other European countries have had no such luck . Before Brexit and Trump, there was Poland, which, since 2015, has been governed by the hard right, anti-immigrant Law and Justice party. In its time in power, the party has codified holocaust denial into law, making it a crime, punishable by up to three years in jail, to utter phrases like “Polish death camps.” They have also taken the notably authoritarian step of exercising tighter control over Polish state media.

But Poland is a high watermark for far-right, white supremacist politics. After all, this is a country that treated a 60,000-person march calling for a “white Europe” as, essentially, their version of a Trump rally. Consider, instead, the bastion of Social Democracy that is Scandinavia.

In Sweden, the Sweden Democrats, with roots in the neo-fascist movement, has increased its vote share from 5.7% to 17.7% between 2010 and 2018, making it the third largest party in the Swedish Riksdag. This is thanks in large part to growing anti-immigrant sentiments stoked by the Syrian refugee crisis. Meanwhile, Denmark’s far-right party, the Danish People’s Party (DPP), holds a plurality of Denmark’s seats in the European Parliament, and is the second largest party in the national parliament. They have grown steadily from 13 seats in 1998 to 37 in 2015. They currently have a supply and confidence agreement with the governing center-right coalition, meaning the DPP, whose stated goals include opposing multiculturalism and preserving the cultural heritage of the Danish people, influences government policy. In fact, Denmark’s anti-immigrant furor is so strong, it has actually spawned an even further right party. In Norway, an anti-immigrant party “with a history of dog-whistling and blatant racism” is in a coalition with the conservative government, which includes several high-level ministerial positions.

Those same sentiments have fueled the rise of far-right parties across Europe. Hungary, for instance, has taken a hard right stance against refugees, declaring “no entry.” They are governed by the right-wing Fidesz, led by strongman Victor Orban, which is on the verge of leaving (or being expelled) from the governing centre-right EPP coalition in the European Parliament in favor of a more radical group. To the right of Fidesz is Jobbick, an ultranationalist party which holds the second-most seats in the Hungarian Parliament. It’s fair to say Hungary has their hands full with right-wing extremism at the moment.

Germany has also seen a sudden surge in its far right with the increasing prominence of the AfD, which just this week made frightfully large gains in the Bavarian elections. Their rise has largely been a response to Germany’s robust commitment to taking in Syrian refugees (though, notably, the number of Syrian refugees in Germany has actually been decreasing as of late). This is largely tied to Germany’s increasing repression of refugees, many of whom have opted to escape to Muslim-majority Turkey rather than remain in the inhospitable nation. The AfD, which has been tied to neo-nazis, has capitalized on their presence, going from a marginal party just a few years ago to the third largest party in the German Bundestag today. That’s right, neo-nazis are gaining power in Germany.

Despite this being an extremely successful period for far-right parties across Europe–ominously enough, they are in perhaps their best political position since World War II–there is still room for them to grow. Right now, there are “151 [MEPs who] belong to groups openly critical or hostile toward the EU.” But the two main far-right groups in the EU Parliament, the EFD and the ENL, are poised to make significant gains in next year’s European election, and they have begun to sketch out their plans for further expansion and potentially seizing power within the European community (for the EFD, which largely consists of MEP’s from the UK Independence Party, expansion will be crucial come next March). This could be possible with the defection of many far-right parties mentioned in this piece, such as Fidesz, the DPP, and the Sweden Democrats, for a start.

The European far-right’s aims are enough to strike terror in the hearts of liberals; they will move away from their eurosceptic push to break up the EU, and begin instead to work towards shaping Europe in their image. That may include rolling back the EU’s refugee policy, enacting more protectionist trade restrictions or even attempting to break up the European Commission. Whether they can actually accomplish any of these goals if they find themselves in a position of power remains to be seen.

And now we’re beginning to see cracks form in South America. The most notable example of this is in Brazil, which has been governed for 24 years by centrist and left-wing Presidents. In the first round of Brazil’s Presidential election last week, former Army Captain and Federal Deputy Jair Bolsonaro took away a sizeable plurality of 46%. In the runoff, he will face Fernando Haddad from the Workers’ Party, which has seen its popularity plummet in the face of overwhelming corruption and destabilization under the rule of ousted President Dilma Rousseff and her predecessor Lula De Silva. Bolsonaro is very likely to defeat Haddad.

Bolsonaro has been widely described as a neo-fascist and a strongman. He has pledged to crack down vigorously on crime and unrest in Brazil and institute harsh and repressive conservative social policies. He has made outrageously sexist comments, saying that women should be paid less than men, for instance, sparking significant opposition from women. He has said he wants to put power plants in the Amazon rainforest, praised the military dictatorship that ruled Brazil from the 1960s to the 80s, and, like Donald Trump, has pitched himself as an outsider with a law and order platform. In fact, he’s so extreme that even Marine Le Pen has said his views would be “insurmountable in France.” Yet despite all this, or more likely because of it, he is almost certain to rule Brazil with an iron fist by next year.

That sigh of relief back in 2017 has now long since dissipated in the powerful storm of global Trumpism. The developed world, it seems, has almost uniformly turned to far-right, populist solutions to sluggish economic growth, social unrest, and jaded political elites. The question facing the opposition: how to fight back. So far, nobody seems to have an answer.