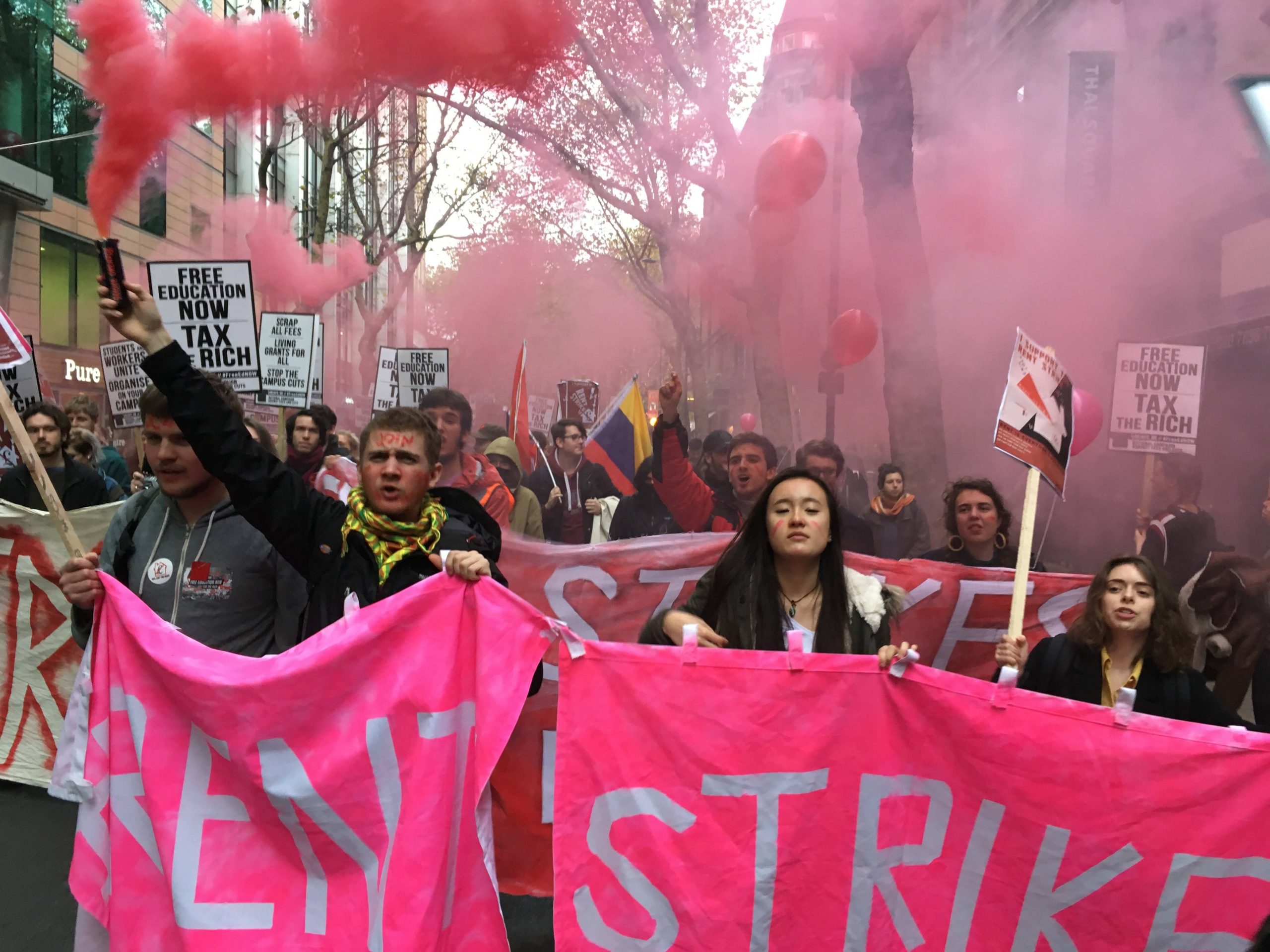 Several thousands of students took to the streets of London to demonstrate against the cost of university tuition last Wednesday.

Organised by the National Campaign Against Fees and Cuts (NCAFC), the demonstration marched from Malet Street down to Parliament Square demanding free higher education funded by taxes for the rich.

Unlike the demonstration in 2010 – in which some of the 50,000 protesters managed to occupy the Conservative Party headquarters in Millbank – there were no reported arrests last week.

The only minor scuffle occurred at the start of the march, with a punch being thrown at a demonstrator claiming to be from Tory HQ holding a placard of Margaret Thatcher.

Students from multiple universities and secondary schools came down to the demonstration from across the country, with coaches to London from Sheffield, Cambridge, Warwick, Edinburgh and Liverpool Universities.

Woody, a PPE student from Warwick at the march said: “To fight for free education is essentially to fight for a different society based on providing for people’s needs rather than turning everything into a business.”

The controversial National Student Survey has been criticised by some as means of marketising education by allowing universities to raise fees based on their ranking within the Teaching Excellence Framework.

Some protesters called for universal living grants and the abolition of tuition fees. Last month, Theresa May pledged to freeze tuition fees at £9,250 in a move seen by many as an attempt to win back younger voters following Labour’s general election campaign policy to abolition tuition fees.

However, with the Chancellor’s budget set to be announced this Wednesday, the demonstrators were keen to ensure that the student voice was being heard.

This year’s demonstration was organised by the NCAFC without the support of the National Union of Students (NUS), who claimed to be putting resources into other events. As a result, the demonstration was put together by a group of volunteers on around 10% of the NUS’ budget for last year’s protest, which was reportedly the largest since 2010.

The NUS had withdrawn support in 2014 over ‘safety concerns’, however, their absence was noted this year with some chanting of “NUS scum” heard during the march.

Ana Oppenheim, a member of the NCAFC, stated that “It was inspiring to see thousands of students from all over the country mobilise to demand a truly free, well-funded and accessible education system.”

Along with LSESU Education Officer Esohe Uwadiae, Ana helped organise an LSE block for the demonstration.

“I was also pleased that we managed to arrange an LSE bloc and show that, contrary to stereotypes, some LSE students are still interested in making a positive change in society.”

Esohe added: “We went to the demo because as a union we believe that education is a right, not a privilege. Also because even with the UK system of loans, many students still can’t afford to go because they can’t afford to eat. LSE is in London which is one of the most expensive places to live even with a job, so that was an issue that is especially relevant to our members.”