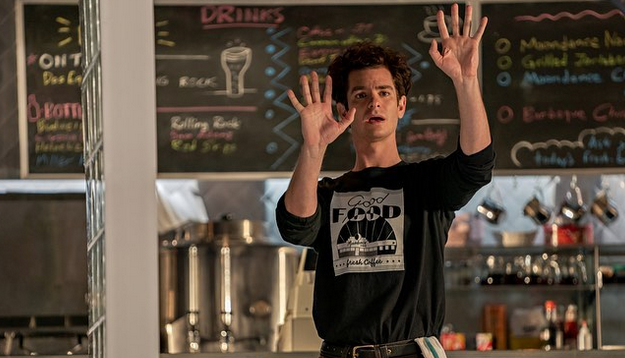 Jonathan Larson, best known for writing and composing the musical Rent, died at the age of 35 just hours before Rent’s first off-Broadway performance. After years of struggling to achieve success and feeling unfulfilled as a writer, he was ultimately never able to witness the impact that Rent had, ushering in a new generation of musical theatre that was unafraid to speak about AIDS, poverty, homophobia, addiction and gentrification against the backdrop of rock music. Originally written as a rock monologue by Larson himself, the film adaptation of Tick, Tick… Boom! is a joyous tribute to Larson and what it means to be an artist, helmed by Lin-Manuel Miranda in his directorial debut and starring Andrew Garfield in his most spectacular performance to date.

Tick, Tick… Boom! deviates from the standard biopic: instead of depicting Larson’s genius and rise to fame through Rent, we see him several years earlier, struggling to get Superbia (his long-term passion project) to Broadway, alongside working a job at a diner. As he approaches and subsequently turns 30, he lives with the constant sound of a ticking clock in his head and worries that he is running out of time to become a Broadway success. This realisation is incredibly eerie for an audience aware of Larson’s ill fate, when he himself was not.

The story of Jonathan Larson, despite originating from the theatre, is one that warrants an adaptation to the big screen. Miranda switches between scenes of Larson onstage, performing and narrating to an audience, and scenes of Larson’s life – preserving the theatrical roots of the story while adding a cinematic flair. The best example of this comes in the charming “Therapy,” which cuts between Larson and his girlfriend (Alexandra Shipp) arguing, and Larson and his friend Karessa (Vanessa Hudgens) onstage, performing a frantic and passive-aggressive choreographed number. The juxtaposition of these two contrasting moods exemplifies what is arguably the purpose of musical theatre – communicating the subtext that we find hard to reveal through speech.

Tick, Tick… Boom! is, at its core, a celebration of art. Beyond its portrayal of Larson’s unwavering persistence in creating art despite a lack of external validation and commercial success, it celebrates the artists that came before us – those that guide us and shape who we have become. The film is unabashed in its love for Larson’s mentor, the veteran composer Stephen Sondheim (Bradley Whitford). When Superbia fails to make it to Broadway, a despondent Larson receives a voicemail from Sondheim (featuring Sondheim’s real voice), encouraging him to continue writing; a scene that is all the more touching considering Sondheim’s passing shortly after the film’s release. Sondheim himself was mentored by Rodgers and Hammerstein as an up-and-coming composer, and decades later, when a young Lin-Manuel Miranda saw Rent and Tick, Tick… Boom!, he decided to pursue a career in musical theatre. And so, the baton continues to be passed.

Among its many musical theatre Easter eggs, the star-studded number “Sunday” is a homage to Sondheim’s Sunday in the Park with George, featuring cameos from Broadway icons such as Bernadette Peters, Brian Stokes Mitchell, Chita Rivera, and André De Shields, as well as members of the original casts of Rent and Hamilton. Just as we can see Sondheim’s influence on Larson, we can see the traces of Jonathan Larson in Miranda’s work. In his musical Hamilton, Alexander Hamilton is a character not unlike Jonathan Larson: preoccupied with his own mortality, he writes like he is “running out of time”. Miranda seems to have an affinity for people that live life with a restless sense of urgency – perhaps a reflection of his own ticking clock.

In a world that cast Russell Crowe in Les Misérables and Ansel Elgort in West Side Story, Garfield brings a refreshingly earnest and full-bodied take to Jonathan Larson in his first ever musical role, and is undeniably the highlight of the film. Although the ‘starving artist’ type that is so wrapped up in their own world can easily become insufferable, Garfield delicately toes the line, presenting him as more zany and endearing than anything else. Larson was a man who made everything into an occasion, and Garfield embodies this exuberance perfectly in “Boho Days”. When a party starts to wind down, Larson livens up the atmosphere by breaking out in song, impromptu and acapella, running around the apartment and getting all the guests involved in singing, clapping and cheering – a scene that will undoubtedly bring a smile to your face.

Tick, Tick… Boom! beautifully conveys Larson’s dreams, frustrations, and fears of “leaving with a half-finished song”. Never a tragic story of death, it remains a story of resounding hope, a love letter to creating art for the sake of art, and honours the artists whose legacies will live on and pave the way for the generations to come.

Hello! I’m Vanessa, a first year doing PPE. I love films, TV and books focused on the female perspective – I am also partial to a good musical! If you ever want to talk about films/books/TV/life, you can find me on Instagram (@vanessaxjh or @vanessashootsfilm) or email me at v.x.huang@lse.ac.uk.

PrevPreviousThe (Continued) Adventures of Emily ★★★½
NextIs Security Breach the beginning of the end for Five Nights at Freddy’s?Next
On Key