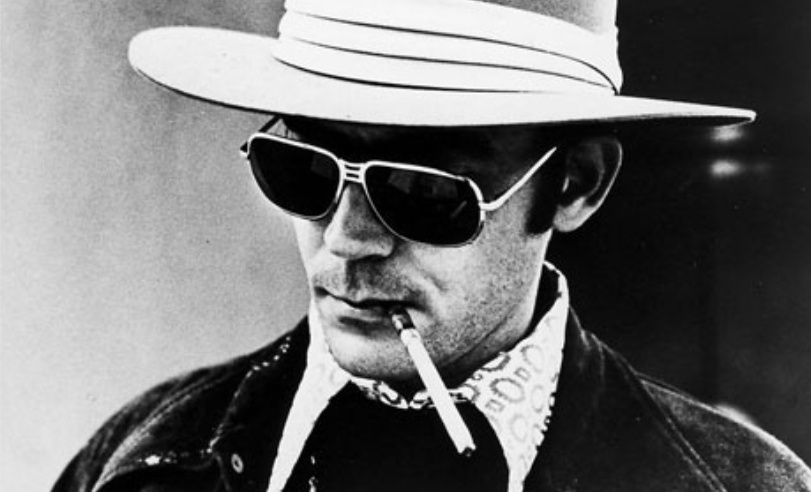 I had been waiting quite some time for an excuse to write about Hunter S. Thompson. And so to commemorate the 13th year of his passing (I didn’t say it was a good one), I decided that I would read up on the most intriguing figure in modern reporting history. Following this decision, my girlfriend and I visited a bookshop in Bloomsbury, around the corner from where she works. After a long search, I managed to find a collection of the gonzo journalist’s work for various publications, entitled The Great Shark Hunt – Strange Tales from a Strange Time. I took this book with me on an impromptu visit to Paris and kept it by my side for the entire three days.

I woke up just after 04:00 to catch my train from Ashford International to le Gare du Nord. I had planned to get through around fifty pages in the two hours that the journey would take; unfortunately, I fell asleep around two minutes in. Following a pleasant train ride, I took a cab to the address of where I was due to be staying. The cabbie didn’t speak great English and my French oscillates clumsily between obscure phrasing and semi-incomprehensible musings. We decided, by a mutual understanding of our ignorance, to sit in silence. I had 4 hours to kill before my airbnb host would arrive. The weather in Paris was perfect – ‘18 degreez with a breeze’ as I quipped in my notes. I walked around the 9th arrondissement de Paris for an hour or so, found a small bar and sat outside, accompanied by my first black coffee of the year. After a short period of mourning for the loss of yet another button on my white shirt, I put my feet up on my suitcase and began reading.

If the old adage is true that we should dance like no one is watching, Hunter S. Thompson epitomises the idea that we should write as if no one is reading. As a result, his work, filled with vivid, often disturbing, imagery and cynical critiques of American customs and traditions, is nothing if not extremely entertaining. There is a wonderful arrogance to his sports writing – can you imagine having the audacity to insert yourself into a piece of writing to the extent that you yourself become central to the subject and story? As the American Conservative William F. Buckley writes, “Hunter Thompson elicits the same kind of admiration one would feel for a streaker at Queen Victoria’s funeral.” But nothing is lost through this approach. Nothing slips through the inevitable cracks of defeasible interpretation. Everything is necessarily what it is – unadulterated and honest journalism.

It dawned upon me, as I sat reading in a dimly-lit bar on Rue La Fayette, how easy it is to forget that Hunter Thompson’s primary role was as a sport writer; he is almost exclusively discussed with reference to drugs, firearms and insanity.

To mull this over, I found a restaurant in a handsome building a short walk from my airbnb. Initially speaking French to the waiter, I conceded when asked something I couldn’t quite understand (I think it was about mushrooms) – “Pardon, je suis Anglais.” I sat down, once again downhearted at how much my French has faded over the past year. There was a small TV in the kitchen of the restaurant playing highlights of Paris Saint Germain’s 7-1 crushing of Monaco. I gather, from the determination of the chef to watch the game despite his boss’s demands and from his wry smile, that he was a PSG fan. The angered faces of the Monaco fans and the glowing smile from the chef made me think of the ‘Duke of Gonzo’ once more. Hunter Thompson might be prepared to say that ugliness in sport is as visible in many of its adorning fans as it is in its bureaucratic structures. In this way, sport is rather like politics. Perhaps, in this way, it is politics. Thompson writes, of a man at the Kentucky Derby, in his article for Scanlan’s Monthly “His eyes are bright red and his face and chest are soaked with beer…the front of his woollen trousers is soaked with vomit; his body is racked with fits of coughing and wild choking sobs.” (4th June 1970).

We accept ugliness and disappointment more readily in politics, but figures in professional sport tend to let us down much the same way that politicians let us down, or the way bankers let us down. Of the alpine ski racer Jean Claude Killy’s corporate ‘sell-out’ following his retirement, Thompson writes “Killy is a good soldier. He takes orders well and he learns quickly. He would rise up the ranks in the army.” No other writer immediately comes to mind as an example of how much we have to fear and loathe, certainly none could write so enjoyably of this.

This amalgam of corporate influence within the higher echelons of sport and insanity from the crowds allows for an immersive experience for the critical journalist. Professional sport is, occasionally, a gold mine for a cynical mind. This is why I believe Hunter Thompson chose to spend so much of his time writing about what should be, at its core, the most unifying component of society – sport. Perhaps if Hunter S. Thompson’s career was during this age, he would be writing on deep web forums at 3 AM, with Dorito powder on the tips of his fingers and a beer stain on his shirt. Instead, he has been recognised as one of the most important figures in exposing the disturbing underbelly of American life and his work in sport journalism will be forever in my mind, as it will in many others.