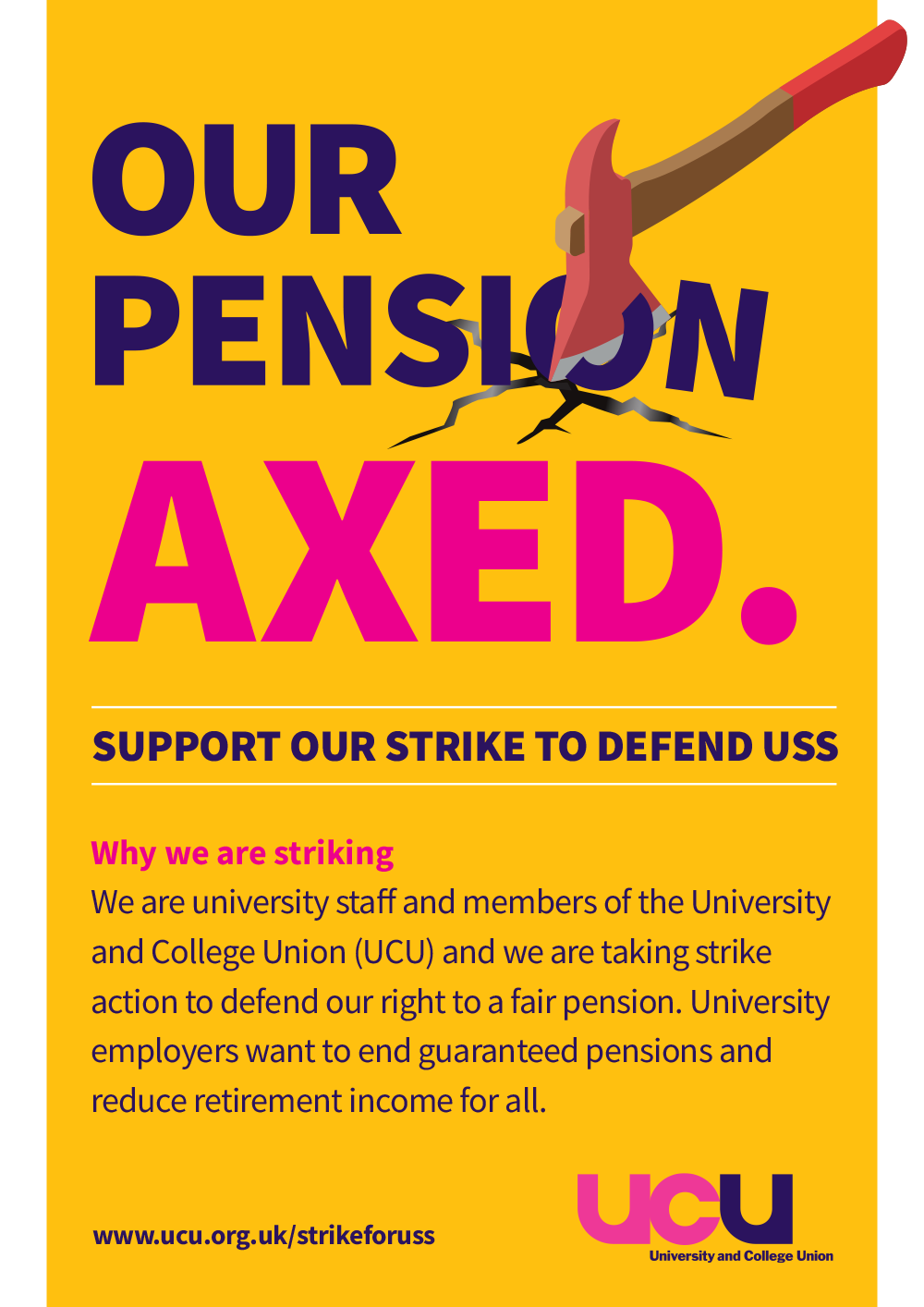 Industrial action over the University Superannuation Scheme began last Thursday at 61 universities in the UK. The scheme and a recent amendment to it, which covers most faculty staff in pre-1992 universities, may leave typical faculty members £10,000 a year worse off. The ‘defined benefit’ pension scheme for faculty members which guaranteed pensions is set to be replaced with a ‘defined contribution’ pension scheme, in which pension income is subject to changes in the stock market. UCU has said this is “the biggest pay cut in higher education history”.

Industrial action is set to continue for the remainder of its planned 14 days until “meaningful negotiations” take place between UCU and Universities UK (UUK), who is responsible for management of pension schemes. It is the biggest course of industrial action in UCU history.

Branches of trade unions across the country have been encouraging everyone intending to cross picket lines not to do so. UCU Guidelines on picketing state that “anyone who decides to cross a picket line must be allowed to do so. But [picketers should] always take the opportunity to talk to them and explain the reasons for the industrial action.” As “students are not vulnerable to disciplinary action like staff…any student who wishes to support us and not cross the picket lines should be made welcome.”

Tony Brown, secretary of UCL UCU, told The Beaver that the action has been well supported and that their branch has grown by 10% over the last week, accompanied by struggles to manage membership applications. More entrances to UCL buildings have been picketed than ever before.

LSE UCU is not participating due to failed ballots on industrial action. With 46.1% turnout on 18 January, and 46.3% on 16 February, both failed to meet the 50% requirement as set out by the 2016 Trade Union Act, which was fiercely criticised by all UK trade unions in being too restrictive of collective action.

The industrial action has split student populations, with some opposing the strike’s tactics in effectively suspending lectures and seminars, some demanding compensation, and others supporting UCU’s aims to oppose the ‘marketisation of education’.

On 22 February protesters occupied UUK HQ in Woburn Square. Occupiers have since stated that UUK are a “parasitic organisation which profits directly from the increasing marketisation of our education system.” UUK told London Student that “We wanted to make it clear that we have never refused to continue to try to find an affordable, mutually acceptable solution. [I]f a credible, affordable proposal were to emerge, even at this late stage, we are confident that employers would want to consider whether such a proposal could form the basis of a way forward.”

Last Friday, UUK requested UCU to “return to talks on the future of the USS pension scheme”. “It is of paramount importance that both sides make every effort to meet – despite the ongoing industrial action – to stop any impact and disruption to students.” UCU will attend talks but has responded to say: “unless the employers were prepared to talk about the January decision to slash pensions then it did not see how the dispute could be resolved”. UUK has said “talks would not re-open the Joint Negotiating Committee decision made on 23 January”. The newly appointed Minister for Universities, Sam Gyimah MP, has called upon both parties “to get back to the negotiating table, without pre-conditions, and to find a solution that avoids further disruption to students.”

On Wednesday the 28th, the London Region March for Education will take place, with assembly at noon from Malet Square continuing to Parliament Square.