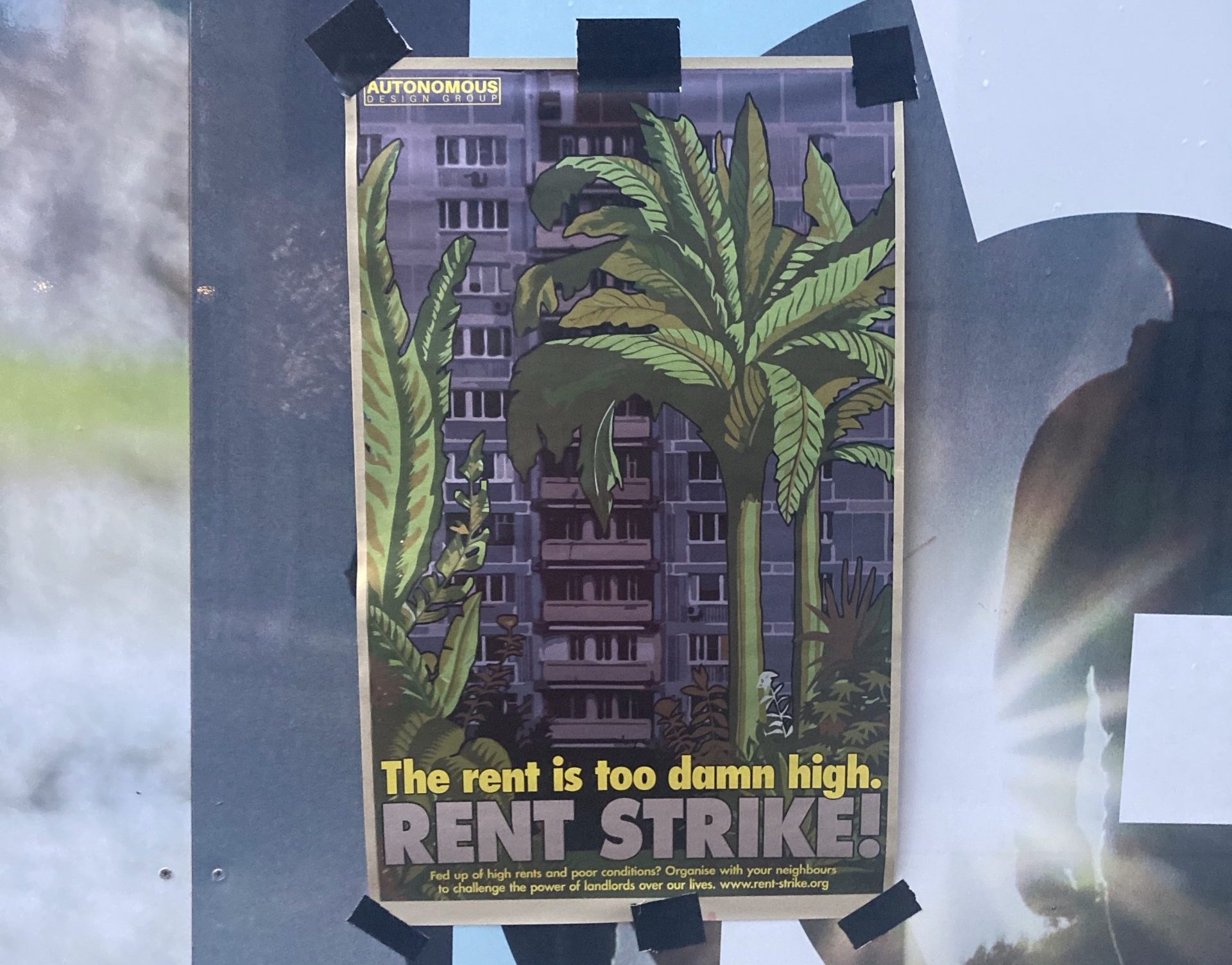 ‘We don’t like that we’ve had to organise. We were desperate.’ The next fight for student activists

In a 2014 piece for the Guardian, the late David Graeber wrote: “If ever a ‘reform’ has been proved an utter failure, the higher educational reforms of 2010 are surely it.” He was writing in support of the Free Education March, in which 10,000 came out in opposition to the marketisation of higher education. This year, a wave of student activism of comparable, if not greater size, has been building. For many, the pandemic has exposed the current system as manifestly unfair.

It’s been three months since The Beaver first spoke with Tori Anderson, an LSE Rent Strike organiser. In that time, the student movement, both at LSE and nationally, has undergone numerous developments. For LSE’s rent strikers, the first piece of good news came on the 27th of January, five days after the payment deadline for LSE-owned halls. The SU communicated that the School had pledged “not [to] take hostile action against students who strike.” This rules out penalties such as evictions, an important reassurance for strikers, although the threat of degrees being withheld remains. Tori confirmed that so far, the extent of the School’s strike-busting has been one explanatory email asking for the settlement of fees, sent after exactly a month of withholding rent (“a nice anniversary present,” she told me). Another concession came on the 15th of February, when the £25 per week holding fee was reportedly scrapped. For this, LSE Rent Strike credits the SU, and specifically Laura Goddard, the Community & Welfare officer, for their negotiations.

Despite such successes, relations between the SU and strikers have been strained. While the Union is heavily involved in lobbying for fee-related issues, Tori argues that students and strikers are too often unaware as to the extent of their actions: “We don’t want our representatives who deal with rent to be negotiating behind closed doors. We want these positions to be truly representative,” a comment that reflects the rent strike’s demand for more student democracy. Emerson Murphy, an organiser of the University of London rent strike, echoed this sentiment, noting “a split in the student movement” between “the grassroots, who are more focussed on de-marketisation” and the “SU-run campaigns, which have a more granular approach.” However, he emphasised that “on the whole, the picture is very cooperative.”

A Lack of Representation at UoL

In my conversation with Emerson, the subject of SUs was particularly salient. Unlike students in LSE halls, those staying in inter-collegiate accommodation have no formal representation to negotiate with their landlord, the University of London. The UoL itself is “really fucking bizarre”, Emerson told me. Since scrapping its student union in 2014 for “political reasons”, it has systematically cut back on its activities, to the point that managing accommodation such as Connaught and Garden halls is apparently its main role. This unusual arrangement has short-changed its tenants who, according to Emerson, “pay some of the highest student rents in London … often up to £10,000 per year.” When you consider that the average maintenance loan in London is around £6,800 per year, domestic students must cough up £3,200 extra, before living expenses are even considered. The situation is worse for international students, who are ineligible for loans from the Student Loans Company. “At a time when students can’t find work, as 60% do in normal circumstances, we need a rent strike,” Emerson says.

So far, progress has been tough. Although full rent has been reduced to a £25 per week holding fee for absent students, and contract releases are possible for term-time residents, this does not benefit those in halls and on 39-week contracts. Rather than engage with the strikers, the UoL management has simply ignored them. Emerson was unsurprised: “Stonewalling is strike-busting 101 … we’ve sent them email after email, but without a union, we can’t get in their faces.” This is the key difference between the LSE and UoL rent strikes: “Every week or so the [LSE] sabbs are in a Zoom call with management,” whereas UoL management will not acknowledge the existence of a strike. Despite it being scrapped for LSE halls, UoL residents must still pay the holding fee, and have not been given an equivalent ‘no hostile action’ pledge. In contrast to the treatment of LSE strikers, those in UoL halls were initially threatened with interest charges of 4% above the base rate on unpaid rent. Understandably, strikers were “a bit shook”, but consultation with lawyers revealed that this was illegal: interest charged on unpaid rent can only be up to 3%, as of the 2019 Tenant Fees Act. Sure enough, the UoL did not follow through on their threat.

Unable to negotiate directly, the UoL rent strike has contacted SUs across London, seeking representation. Despite UoL residents being nearly 80% UCL students, the UCLSU has so far been reluctant to back the strike. The LSESU has been more supportive, although beyond petitioning the School to involve itself, there is little that it can do to help. Even in taking this action, our SU is an outlier. “There are some real shocker [SUs] out there,” Emerson told me. He isn’t alone in this view. Groups such as Liberate the University, of which he was briefly Treasurer, are running slates in SU elections across London, and nationally, to “overhaul the rubbish ones that are full of careerists.” After all, Emerson says, “An SU isn’t there to give out pizza every now and then.” In the short term, however, UoL students have little recourse but to take matters into their own hands: “This isn’t a choice. We don’t like that we’ve had to organise. We were desperate.”

Both Tori and Emerson acknowledge that, despite the achievements of rent strikes, “They’ll probably come to an end relatively soon.” Already, the focus has shifted from rent to tuition, an area in which the LSESU is leading the charge nationally. According to email communications, as of the 19th of February, 20 students’ unions had joined the LSESU’s ‘Students United Against Fees’ (SUAF) campaign, which is lobbying the government to “take responsibility for compensating students and support the [higher education] sector.” In January, David Gordon, the LSESU’s General Secretary, told The Beaver that while the School has invested more into education this year, “No one has gotten the experience that LSE marketed to them, nor one comparable to previous years. That creates a case for tuition fee reductions.” However, he emphasised that “no UK university has, or realistically could have,” achieved that experience. Moreover, were LSE to unilaterally issue tuition fee reductions, “It would likely have to take out loans to cover the cost.” Although the School is rich, he told me, “It’s not as rich as it seems,” especially after bearing the costs of the pandemic. This explains SUAF’s decision to push for an entire sector bailout.

Government aid is also being pushed for by the National Union of Students (NUS), as part of its ‘Students Deserve Better’ campaign. Its aims have a different focus than those of SUAF: Alongside rent rebates, the re-introduction of maintenance grants and a no academic disadvantage policy are central tenets. These particular demands demonstrate an understanding that poorest students have been hit hardest by the pandemic. As Emerson put it, “For many people, the situation is dire.” This is especially the case for international students, who in many cases do not benefit from concessions. Often, international students take out 39-week contracts, from which neither LSE nor UoL allows penalty-free releases. One anonymous LSE striker told The Beaver:

“My physical and mental health was in really bad shape because of the poor studying and living experience in my hall during these past few months. I left my accommodation after lockdown and requested to be released from my contract. Obviously, LSE refused to do so.”

Despite the student providing their diagnosis as proof, the School allegedly requested to see a diagnosis from a British GP, which the student could not provide, having returned to their home country. “There’s a stereotype that international students, because they have to pay unregulated fees, are very wealthy,” Emerson told me, “but in reality, a lot of them are much more vulnerable than you might think.” The Rent Strike social media pages often receive messages from struggling students, needing a place to ask for advice in confidence. A Channel 4 report from late January highlighted how the Newham Community Project, an East London food bank, has had to dedicate itself solely to supporting international students – about 1700 students per week. Whilst this case is particularly bad, it is not anomalous, and a NUS study found that “9% of students have used food banks during the pandemic”. Clearly, pre-existing support measures, such as hardship funds, are insufficient to protect the most vulnerable members of student bodies.

Whilst the pandemic is responsible for much of the hardship that students have experienced this year, systemic factors in higher education played a role in facilitating it. Students have been suffering since long before lockdowns and Zoom classrooms. The current wave of activism, although especially necessary this year, is only the latest expression of student frustration at unpayable debt, a lack of grants, and high rents. The generation that governs them had none of these. At the time of Graeber’s piece, students marched “without the support of any major party or institution, abandoned even by their own National Union of Students.” That’s not true anymore.