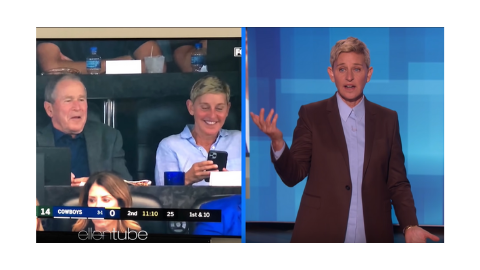 What to make of Ellen DeGeneres’ friendship with George Bush

After being pictured with the former President at a Dallas Cowboys game on October 7th, Ellen DeGeneres has had to defend the unexpected friendship between herself and the 43rd President of the United States.

DeGeneres addressed the backlash that unleashed on her famed talk show:

“[Everyone] thought, why is a gay Hollywood liberal sitting next to a conservative Republican president?”

Different is certainly one way to describe it.

DeGeneres’ critics were quick to point out that the issue here was not specifically to do with Bush being a Republican, but more to do with his actions as one of the most controversial presidents the United States has ever seen. His poor response to Hurricane Katrina, open opposition to gay marriage, same-sex adoptions, and his catastrophic wars in Afghanistan and Iraq are just some of his notably ‘different’ stances.

Various LGBTQ+ magazines have voiced their concern over the friendship between Bush and DeGeneres.

Advocate said the appearance of the two together was ‘distasteful’, and pointed out the ‘irony of the most famous LGBTQ person on the planet yukking it up with one of the most notorious homophobes.’

Mey Rude from Out Magazine goes as far as suggesting that Ellen DeGeneres no longer represents her, or much of the LGBTQ+ community anymore.

Ellen received a similar reception for defending another friend of hers, Kevin Hart, whose history of documented homophobia was eventually unearthed soon after he was announced as the host to the 2019 Oscars.

Not to mention, DeGeneres’ defence of Bush comes at a fairly testing time for the LGBTQ+ community, and civil rights as a whole. The Supreme Court is, at the time of writing, divided over whether laws barring workplace discrimination should apply to gay and transgender workers. There are fears that Brett Kavanaugh, the newest associate justice on the bench, may tip the balance on this decision. It was Bush who recommended Kavanaugh to Trump, and continued to support him through sexual assault allegations.

Maybe we ought to take after the string of Hollywood celebrities who have shown their support and admiration towards DeGeneres’ gesture. The high-profile friendship has been described by some as a step forward in an increasingly politicised and polarized society where we can’t befriend people whose politics differs from ours.

‘The ability to forge and retain friendships across party, racial, and ethnic lines is what makes our America a country worth cherishing’, or at least, that’s what Dava Guerin from the Inquirer thinks.

So maybe a difference in opinion is a good thing. After all, Bill Clinton and Michelle Obama were able to forge life-long friendships with Bush despite their vast political differences.

On the other hand, maybe we should question whether positivity should displace justice and principle in this instance. DeGeneres’ narrative of kindness here seems to empower the already powerful, or, as Constance Grady from Vox puts it, ‘the people who helped to set in place the problems the rest of us are currently living in’. Phrased in another way by Sarah Jones from New York Magazine, Bush was never so much as formally reprimanded for invading Iraq, so, surely, the ‘moral response’ from society would be to ‘shun him completely’.

Mehdi Hasan notes the current political state of affairs, where ‘if you’re not Trump, all is forgiven’. DeGeneres has had Bush on her show before, but does not want to extend the same courtesy to Trump, who she calls ‘dangerous… not only to the country, but to [herself] as a gay woman’.

‘I don’t want to give him a platform… It validates him’.

So maybe Bush is the lesser of two evils. Ellen certainly seems to think so.

DeGeneres ends her explanatory segment on her controversial friendship with the following:

“When I say be kind to one another, I don’t mean only the people that think the same way that you do. I mean be kind to everyone.”

If only President Bush had followed that advice during his time in office.