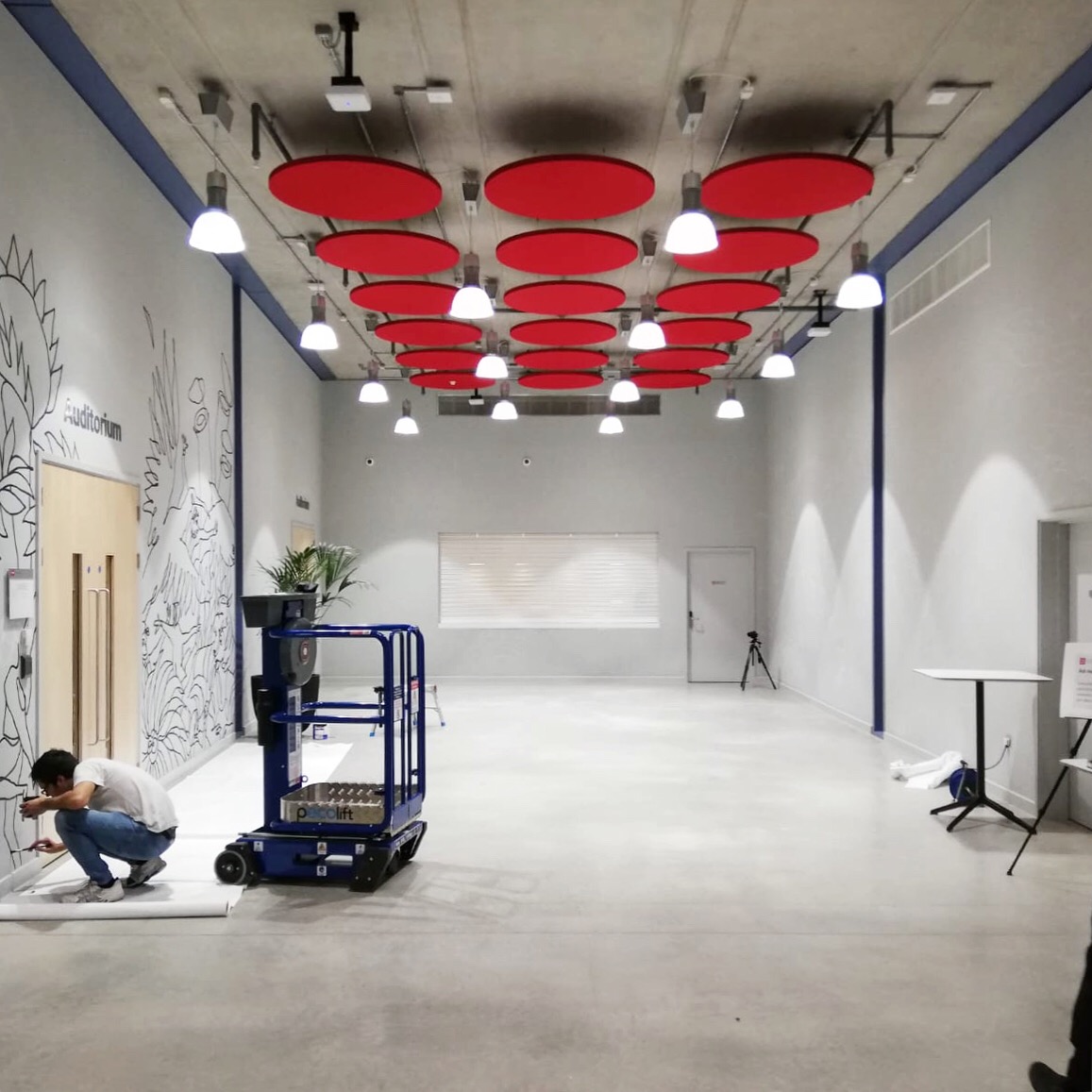 Over the last few weeks Carlos Peñalver, a young Spanish artist, has been transforming the Central Building’s white walls into a large-scale, inclusive, and lively work of art. As students paced in and out of the building, the lower ground floor has undergone a complete metamorphosis. Peñalver began painting during the start of the academic term, engaging with students and incorporating their thoughts within the mural. The Beaver recently met with Peñalver and art curator Beth Fleming to learn more about this intriguing project.

It all began in March 2019. A team from Artiq, an art advisory company, visited the Central Building’s construction site and brainstormed a way to incorporate art within the future classrooms and lecture theatres. Armed with yellow construction helmets and steel boots, the team came up with the idea of a mural. The project evolved and grew at the same pace as the building’s construction, as they exchanged ideas on themes to include in Peñalver’s artwork. After long conversations, Fleming and Peñalver decided they would combine political and environmental themes within the mural, including deforestation and species extinction, to grab students’ attention. Peñalver told the Beaver: “Originally, we wanted to feature some global issues. I wanted to create something beautiful from plants and animals that were vanishing. Imagine a beautiful garden, composed of scenes that are now disappearing.”

While he was painting in the first few weeks of term, students frequently came to Peñalver and shared their thoughts on the topics. The openness of the dialogue allowed the painter to spontaneously incorporate student ideas within the mural. For instance, Ethan Stratford, the President of LSE’s Sustainable Futures Society, showed Peñalver the society’s logo, which is now featured within the mural. “We approached Carlos with the idea to immortalise the Sustainable Futures Society’s logo within the mural artwork. We thought it fit well with the themes of Carlos’ work, and was symbolic of the lasting impact of our society’s projects” Ethan told The Beaver.

Other students mentioned key political figures in environmental activism, which were later included. Can you spot Greta Thunberg with her iconic braids, and national treasure David Attenborough?

The painter used the building’s U-shaped structure to deliver a story composed of short episodes, similar to a biblical story mural. The narrative is focused on environmental change, particularly in the LSE community. In the first episode, Carlos presented the memory of an idealistic garden. Acrylic line-paintings of lush vegetation and wildlife swirl and dive along the wall, conjuring feelings of freedom and liberty in the viewer. The painter represented chaotic scenes on the following walls: the Amazon rainforest is bursting into flames, anchoring the artwork to present-day climate disasters and raising a sense of actuality and emergency. Carlos wanted this episode to reflect the consequences of global warming and cause the viewers to reflect on environmental change. The story continues to unfold – after the fire, vegetation has disappeared. Black line-drawings outline the shapes of polar bears and walruses purposelessly roaming around waves of plastic. Animals are no longer in their natural habitats: they have been displaced, which brings about a sense of absurdity and disarray. The next scene stresses the lack of public reaction and care. A grotesque carnival is depicted, emphasizing people’s ignorance regarding the gravity of the situation. Characters float in the air and dance around, wearing flowers in their hair and animal skin.

The final episode is not painted: it can be found within the student body itself. Along the last wall, the building’s main wooden staircase springs up from the lower ground. Students usually study and chat, sitting on the steps. This view represents the mural’s final episode. What Peñalver wished to highlight is that the answer to global issues lies here, among LSE’s community. Students are creative, bright, and engaged – they are taught to question, think critically, and solve problems. The mural tackles this idea, by pushing people to think, react, and engage and perhaps even, one day, solve environmental disaster.