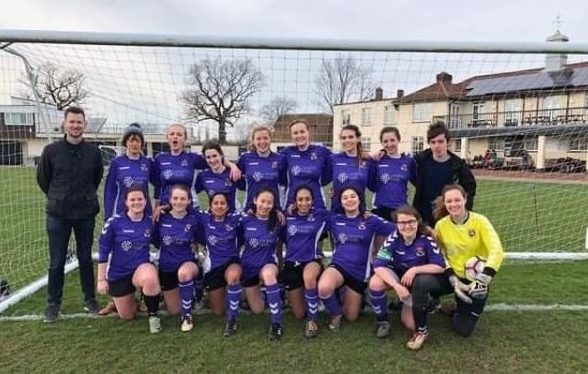 After a season which has seen seven wins, one draw and one loss, LSE Women’s Football 1st Team were declared Champions of the South Eastern 3B League with one game to spare, following a physical encounter with Buckingham New University at Berrylands.

In the lead up to the match, the fixture was billed as the title decider, with only a point separating the two sides. A win for LSE would guarantee the league, and for Buckingham New with a simple fixture the following week at home to Hertfordshire 2nd, would likely seal the league on the final day.

The Team’s solitary loss of the BUCS season came away at Buckingham New, so LSE were keen to make amends and record a title clinching win at home against a side who’s previous conduct had been both aggressive and disrespectful towards many teams in the league.

With their mini-bus driver acting as manager on the side-lines, Buckingham New started off the game surprisingly well organised and proved difficult for LSE to break down. Some tidy defensive work from both sides ensured the match looked to be heading towards a stalemate. However, a Leigh Rowland goal for LSE just before the break elevated the team’s confidence going into half time.

Throughout the second half LSE’s lead rarely looked in doubt, and the team were able to relax on the ball with little pressure coming from Buckingham’s forwards, who remained static for much of the game. Mid-way through the half LSE added another goal through Lizzie Watson, and at 2-0 the team were happy to sit on the lead until the final whistle came.

When full time arrived, jubilant scenes erupted on the pitch with the players celebrating the win with our supporters who had been vocal all game and armed with beer- filled water pistols to spray the players as they came off. A bottle of champagne was then opened by our Social Secretary Tash Pickard and sprayed over our players, supporters and coaches as a dejected Buckingham New team looked on.

Though the score line reflects a comfortable win for LSE, a large proportion of the match was actually played with only 10 players, following a bizarre refereeing decision to send off one of our players over a seemingly trivial matter.

Women’s Football extends its thanks to Megan Beddoe and James Baxandall for their organisation of the event, and especially to James who ran the line for the duration of the match in freezing weather conditions.