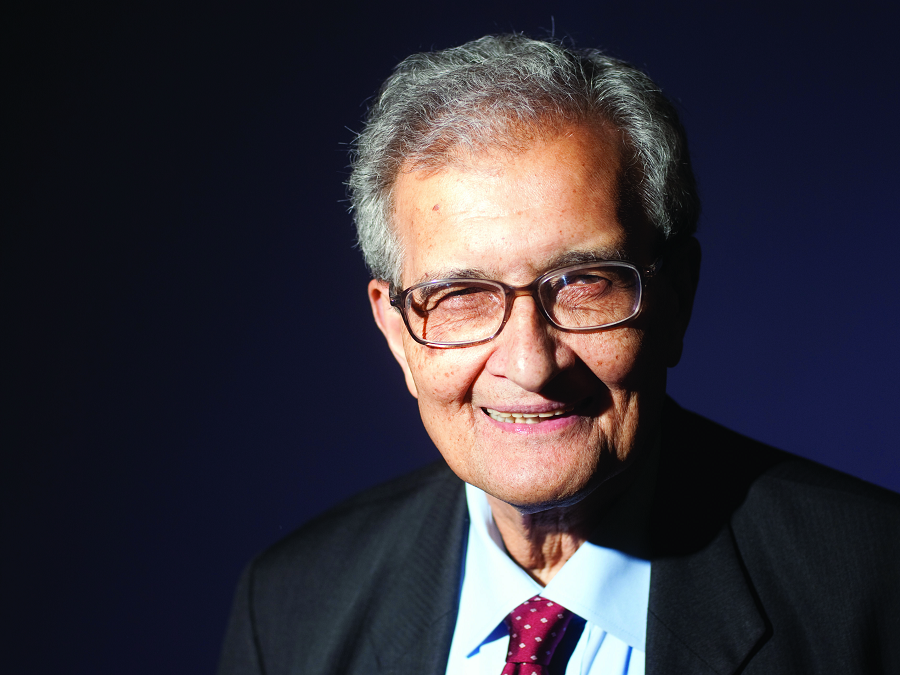 Amartya Sen on ‘The Country of First Boys’ at the LSE

“I’m always very happy when people assume I know answers to questions.” True to form, when Amartya Sen visited the LSE last Friday, he brought with him his quintessentially good-natured sense of humour and his wonderful ability to tie the past with the present, by enriching contemporary economic theories with stories from Sanskrit literature. The Old Theatre was abuzz with students who were lucky enough to get tickets for the event, and there was an impressive stream of live-tweeting (#LSESen) that ensued.

Amartya Sen needs no introduction, but here is one anyway: Sen’s most notable academic achievement is as recipient of the 1998 Nobel Prize for his contributions to welfare economics. He is also credited with developing the Human Development Index (HDI). Currently, he is the Thomas W. Lamont University Professor, and Professor of Economics and Philosophy, at Harvard University, and an honorary fellow of the LSE.

The discussion about his new book took the form of a conversation, lead by Lord Nicholas Stern, IG Patel Professor and Chair of the Grantham Research Institute on Climate Change and the Environment at LSE and President of the British Academy. The discussion was organised by the South Asia Centre at LSE, which was established in June this year to engage with research interests pertaining to the South Asian region.

During the discussion, Sen talked about some of the most prominent socio-economic issues facing contemporary society in his new book, such as social justice and welfare, by looking at specific indicators such as disparity, illiteracy, media integrity, freedom of speech, inequality, exclusion, and exploitation. Through the use of rich anecdotal evidence and sound analysis of economic indicators, Sen weaves a degree of lucidity and clarity into his essays that is refreshingly different to the sometimes tedious and highly technical Economics jargon found in other publications, which result in a deficit of understanding.

Most interesting perhaps was his view on the issue of Identity. Lord Stern’s first question to him was, “..tell us why multiple identities are important?” To which he replied that, “single identities are a sign of being in a position of weakness” and “to focus on one identity is to misdescribe a person.” When questioned about the complex topic of Indian national identity, he said, “I’m very keen on people thinking about their identity to the world and not just their own country.” He was quick to highlight the dangers of assuming a narrowly constructed identity by saying that, “You can easily inflame a population into violence by playing up one identity exclusively.” When questioned about the migrant crisis on Europe’s doorstep, he added, “I would like to see more recognition of our global identity” and that for him personally, “knowing Sanskrit and Bengali is one of my many, many identities.”

An intellectual heavyweight whose socio-economic views and philosophical tendencies are linked by an underlying sense of ethics and an understanding of the human condition, Amartya Sen at 82 years old, shows no sign of slowing down anytime soon.