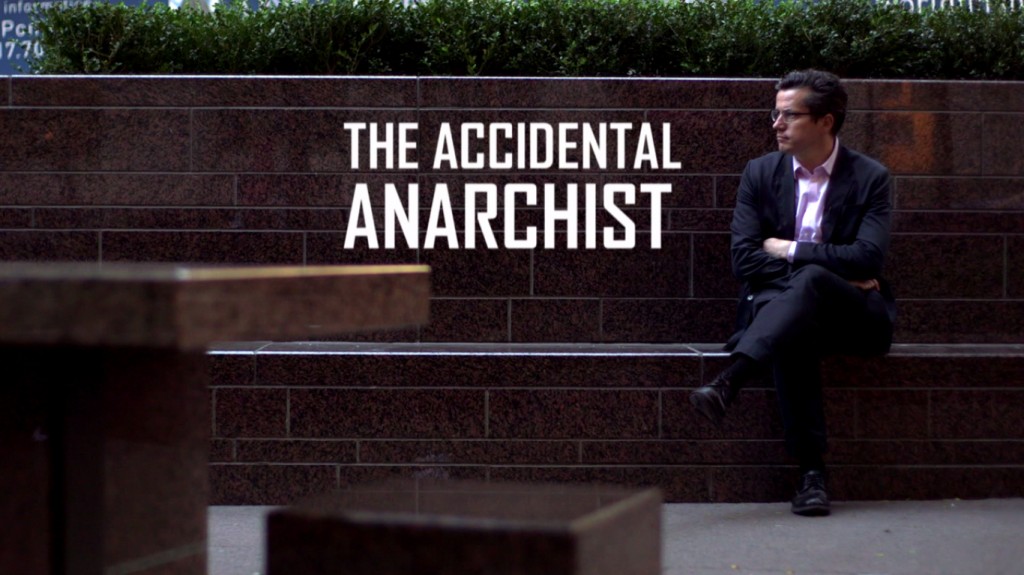 Undoubtedly, the twentieth century has seen an efflorescence in the political mind of the humankind. New thoughts and philosophical innovations have been introduced via books, talks in cafés, manifestos, and have enormously changed the shape of history and society. Bakunin’s anarchism is a case of strong interest a matter of class struggle that goes even beyond the Marxist dictatorship of the proletariat, hurling the people’s self-determination further than the mere concept of an organised state.

On Tuesday 21st November LSE hosted the screening of the documentary “The Accidental Anarchist: Life Without Government”, and its director, Carne Ross. Briefly, the documentary showed his journey from the Security Councils seats to the – de jure – Syrian region of Rojava. His career as a diplomat had him involved in the Iraqi policy and its alleged weapons of mass destruction. After a fortuitous encounter with an Iraqi citizen, who asked him: “Are you, then, involved in the genocide of my people?”, Ross’s faith in politics and the state have been essentially undermined. Following an interview with Noam Chomsky, and Giacomo Leopardi’s footprints in a “mad and most desperate study”, his beliefs collapsed and reached a radical turning point. If the state cannot be trusted, why not completely refuse its avails? Thus, anarchism seemed new, tempting, impeccable… But is it anarchism? We will come back to this in a while.

Technically, the documentary was a fascinating travelling guide. It showed an amazing taste on choices of artistic matter: light, location, interviews, etc. All has been chosen with acumen. All throughout the screening I could not help but think leaving work behind and eventually move to Catalonia or New York. Without any regard to Said, Rojava too has been shaped according to one’s own view of the world. Or at least, of how it should be. Particularly, the Catalonian communal town, reminded me of an identical Italian counterpart called Nomadelfia. When in high school, during a week of conferences and events right before the winter break, three representatives of this community came promoting and presenting their lifestyle in the community. No private property; working is for the community and, therefore, is not paid; and family units are gathered in bigger nuclei, sharing meals and time. The first question from the young audience was “how many people live in the community?” “350 people”. I think this little number of inhabitants to be self-explanatory.

This leads us to a serious problem I spotted all throughout the documentary. It completely neglects the compelling power of numbers, statistics, quantitative factors… In wider terms, there was a complete lack of data. The appalling incident where a Kurd had been erroneously murdered did not end up in a blood feud, for the victim’s family decision to forgive the assassin. However, how many Kurd families decide to forgive, and how many seek revenge in such an act, be it fortuitous or on purpose? Both in the examples of the Catalonian commune and the sojourn in Rojava, the main focus was the propaganda for the ideology. Moreover, was the choice of hinging on one’s personal life and crisis the best way of presenting the matter? Wasn’t it better, otherwise, to shoot an impersonal compendium and field research on the subject? And what was, actually, the message the audience should have caught from his intimate spiritual journey? It seems improbable that zeroing in on oneself could serve at best to present a bigger value, as brotherhood and anarchism.

Let us get back to our first question. Is it anarchism? In this article I have no intention to criticise a political belief, for everyone has the right and the freedom to follow a political faith. Anyways, according to the documentary, Rojava and its people are included in the concept of “anarchism”. However, when speaking of Rojava, it is more common to address their wartime “political experiment” as a direct democracy. According to Si Sheppard (professor at the Long Island University), Rojava is a country “established on the principle of democratic confederalism”, since it has an equal allocation of power among the citizens of the three cantons (Afrin, Cizire and Kobani), and between genders. Thus, it is a direct democracy involving the whole population, regardless of ethnicity and religion.

How is this different to what Carne Ross conceives as “anarchism”? The confusion with the Catalonian anarchist collectives of the Spanish Revolution is crystal clear. Rojava, however, has a power structure, two co-chairs, Hediya Yousef and Mansur Selum, the latter being member of a party (the PYD). Its political system moves within the framework of the organisation of a state, while in the first conception of anarchy Bakunin refused the idea of freedom limited and governed by a State, since it is a deceit. Although Bakunin speaks about federalism, it is nonetheless outside the scheme of an organised state, with a top-down power structure. Moreover, even if accepting an anarchic model in Rojava, both in Bakunin’s and the Spanish Revolution’s examples we have a strong anti-theologism, while religious pluralism is one of the Rojava’s government pillars.

As a conclusion, I would like the stress again the fact that this article is not a critique of a political belief, or of the work of Mr. Ross in his International Diplomat NGO. However, it is not possible to ignore the propagandistic attitude of his documentary, and the search for support more than truth. I would also like to end this article with a question. During the Q&A, an audience member raised a crucial question: “Where do you get the funds to conduct your counselling work?”. And the answer was: “Unfortunately we don’t know the source of the money we receive. Aside from donations of people that believes in this project, we get paid from the same customers”. Thus, is it ethical to accept laundered money, that funded who knows what organisation, to follow one’s ideas?

PrevPreviousUnboxing The Doughnut: An Interview with Kate Raworth
NextIndonesia: A Democracy At The CrossroadsNext
On Key