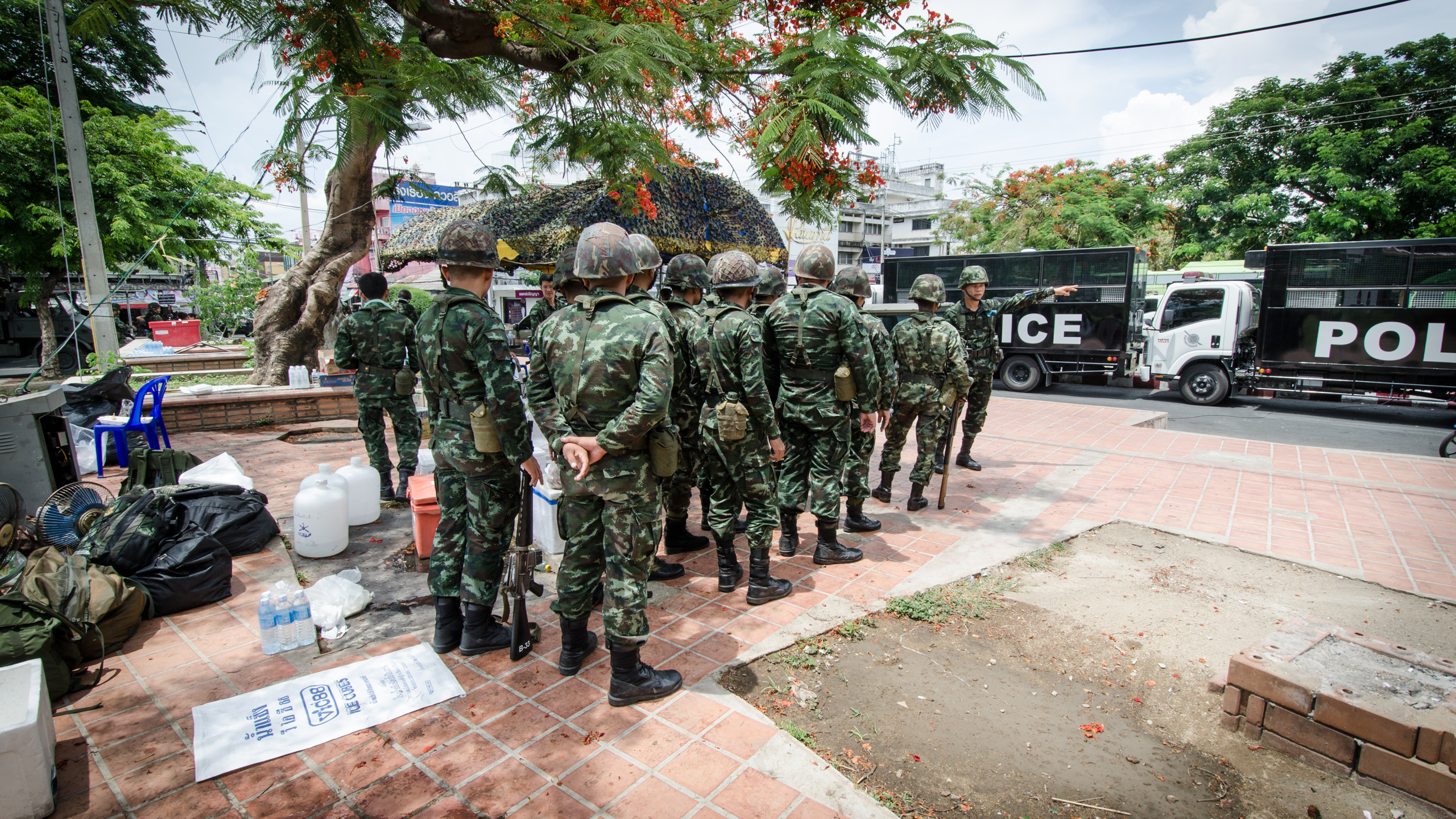 Coups: Lessons to be learnt from a different experience

The recent coup in Zimbabwe which toppled the seemingly immortal 92-year-old Robert Mugabe, who had previously seemed set to be president for life, has led to a spectacle that to some observers might seem bizarre, that of a crowd of civilians cheering an army chief who had led a coup. To many, General Constantino Chiwenga seems a hero, an army man who had finally removed from power a brutal and authoritarian leader that had mis-ruled his nation for 38 years. Yet one should be wary of heaping too much praise on General Chiwenga and the military men that stood with him, for military takeovers seldom lead to a good end.

As a Thai, I can somewhat proudly say that I am no stranger to a military coup or twenty, for I have lived through two coups myself in my 18 years on this planet, one in 2006 which brought down populist Prime Minister Thaksin Shinawatra, and another in 2014 which removed Prime Minister Yingluck Shinawatra, the former’s sister (the military doesn’t exactly have a great relationship with the Shinawatra family). Indeed, take a glance at the modern history of Thailand and you will discover that there have been at least 21 coup attempts since 1912, arguably more so than any other nation in a given time frame, an average of approximately one every five years. 9 Prime Ministers of Thailand have been overthrown in a coup, and the country has seen all manners of coup attempts from the traditional seizure of government buildings and following radio/television broadcast to the truly bizarre attempt by the Navy in 1951 that ended with the Prime Minister swimming across the Chao Phraya River after the flagship of the Navy, on which he was being held hostage, was sunk by the Air Force.

You may ask what relevance this has to do with the events in Zimbabwe, after all, Thailand and Zimbabwe are very different, historically, culturally, economically, demographically, the list goes on. Yet the public reaction to General Chiwenga’s actions bear strong similarity to the public reaction in Thailand during the last two coups in 2006 and 2014. Both times, an embattled Prime Minister, who had previously entered into government on a huge landslide, was being demonstrated against by large numbers of people. Both times the military intervened, promising peace and order, which they generally delivered, and a return to normalcy, which happened in 2008 with the transfer of power to an elected government, but has yet to happen with the new military regime. In both cases, the people rejoiced in the actions of the military, and yet arguably they both set Thailand back for years to come, especially politically. In both Thailand and Zimbabwe, the military’s actions appeared to be, and were sold to the public as, an outburst of patriotism by a non-political entity that could no longer tolerate a civilian government mismanaging the country. But the truth is much less pleasant.

Like most despotic regimes, Mugabe was only ever able to last that long because of the support of the military, and it was only once he had lost the support of the confidence of senior military staff that he was overthrown in a coup. To applaud such actions would mean accepting the emergence or continuation of the military’s role as ‘kingmaker’ in government, and whilst the removal of Mugabe should indeed be cheered as a glimmer of hope, the process through which it came about leaves question marks hanging over the independence of any following government. A military-appointed but ostensibly civilian government can only govern for as long as it has the backing of the military, and would therefore be wary of taking any independent strides that would go against the wishers of the military chiefs. It would also mean that the military’s interference in politics will potentially be normalised, as it arguably has been in Thailand, where there is often bated breath over the annual promotions list as observers wait to see whether the new C-in-C, RTA will be someone friendly to the government or will instead decided to impose a government of his own. More often than not military officers will enter into power promising to right the wrongs of the past government, but will instead once in power will focus on their own personal enrichment or the advancement of their family/clique interests.

That is not to say that the installation of a military government or a civilian-led but military-controlled government is always disastrous, the technocratic cabinet installed in the aftermath of the coup in 1991 saw a number of substantial reforms to Thailand that improved the country for the better, and Portugal’s coup in 1974 saw the end to the authoritarian Estado Novo regime, but these are few and far between. Instead, the pattern both in Thailand and indeed across other countries that have a history of military coups, is that such actions generally lead to an increasing political role for the military, and the rise of that institution as a political powerhouse of its own. This blurring of the divide in civil-military relations with regards to politics can, and has had, dangerous implications for both parties. For civilian heads of government it means having to gain the approval of their military chiefs or risk being removed from power in a coup, and for military leaders it means a growing suspicion of them by the civilian government which they are supposed to protect and uphold. Symptomatic of this is the annual promotions list for Thailand, a seemingly straightforward bureaucratic process which actually involves countless intrigues, compromises, an extensive patronage system, and general gnashing of teeth amongst interested observers. Whilst the process is meant to be administered by a quasi-independent promotions board, a number of different players have in the past, and continue to, attempt to try and get the results weighed in their favour. The Prime Minister, whether they be civilian or military, will typically seek to put pressure on the committee to promote either a reasonably weak-willed or unambitious generals who will hold no aspirations of power themselves, or to promote close associates who will maintain a support base for the regime in the military.

The result has been the same with either type of prime minister, with military meritocracy being sacrificed in favour of political expediency, as well as corruption being entrenched into the military promotions system. Failure to have their allies promoted may be catastrophic for certain parties, which was the case with Prime Minister Thaksin Shinawatra, who failed to prevent the promotion of officers hostile to his government to the key posts of Commander-in-Chief of the Army and Commanding Officers of the 1st and 3rd Area Armies, all three of whom were some of the key players in the coup that removed him in 2006. Another problem that arises from this is that military cliques and old-boys networks take on a newer, political, dimension, as various factions within the military jostle amongst themselves for promotion in the hope of one of them becoming C-in-C, launching a coup, and then rewarding fellow clique members with important political appointments. Most obvious of this is the fact that the current Prime Minister, Deputy Prime Minister, and Minister of the Interior were previously all serving officers of the 21st Infantry Regiment, and so was the previous Commander-in-Chief of the army. Such a political role played by a country’s military leads to a downside in both the civilian government’s ability to govern, but also in the military’s ability to effectively fulfill its task of protecting the nation, a double-whammy of misfortune for both parties involved. Furthermore, it leads to the undermining of public trust in both the institutions of civilian government, as well as in the military, the former because military governments often demonise the preceding civilian one in particular and civilian politicians in general to legitimise themselves, and the latter because of the blatant overstepping of their role and the mostly authoritarian nature of military regimes in general.

So whilst the actions of General Chiwenga and his fellow officers in removing a corrupt and brutal dictator from power are indeed worthy of congratulation, the general public should think twice before hailing them as heroes or statesmen just yet, for coups are seldom simple affairs, and their results are not always pretty.

PrevPreviousGrenfell – A piece of London, broken by Britain
NextMalcolm X: The Most Misunderstood Man of the 20th CenturyNext
On Key