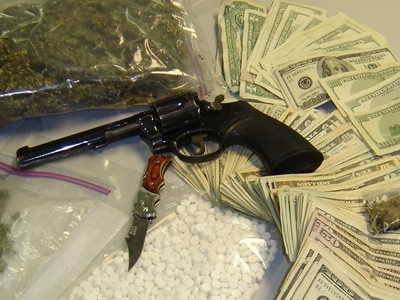 The term “Narco-terrorism”, first coined by former Peruvian president Belaunde Terry, refers to the ability of narcotics traffickers to manipulate a government or society by threatening or using violence and intimidation. The USA’s Drug Enforcement Agency (DEA), takes this definition one step further, defining Narco-Terrorism as the “participation of groups or associated individuals in taxing, providing security for, or otherwise aiding or abetting drug trafficking endeavors in an effort to further, or fund, terrorist activities.”

In an increasingly interconnected and interdependent world, Narco-Terrorism and other means of funnelling funds to terrorist organizations have posed a veritable threat to the economies of individual nations, such as Mexico, Columbia, Peru, and the countries of the Golden Triangle and Golden Crescent. Although the Republic of Korea is not specifically affected by the issue of drug-related terrorism, it’s reputation for not having severe drug abuse problems and the fact that the port of Busan in South Korea is the second largest in East Asia, act as incentives for others to use South Korea as a transhipment point for illegal drugs (for instance marijuana, hashish, heroin, ecstasy) en route to countries such as Iran, North Korea, USA, China, Thailand and South Africa.

Furthermore, in the late 1980s and early 1990s, the stringency of anti-drug laws under the 1988 UN Drug Convention led to an immense surge in prison populations worldwide, which in turn led to the liberalization of drugs such as cannabis. The term “drug liberalization,” refers to the process of eliminating or reducing drug prohibition laws. The liberalization of cannabis, the most widely trafficked and easily available class of drug in the world, is a subject which has been under constant debate. Marijuana, a form of cannabis, is cultivated legally as hemp in the northeast and southwest regions of South Korea, and is used to produce fertilizers as well as fibre for traditional hand-made funeral clothing, with only a portion being diverted for illegal use. However, historically, the reason the Republic of Korea is considered a relatively drug-free country, compared to the USA, Japan, and other countries, is due to its policy of severe punishment for drug-related crimes, including simple drug abuse. The death penalty, life imprisonment, and prison terms for not less than 10 years, have been chosen as the preferred strategy in an effort to build a healthy and drug-free society.

The South Korean parliament has thereby instigated several judiciary measures, such as the Cannabis Control Act and the Act on the control of Narcotics, which have been successful in controlling cannabis, narcotics and psychotropic substances. Furthermore, since marijuana remains the second most abused substance in South Korea next to methamphetamine, in 2003, the Korean National anti-drug program was put into effect, targeting domestically produced marijuana. Within the same year, 5,599 marijuana plants were seized in South Korea, causing a 62% decrease in locally grown marijuana. Through the tightening of specific drug laws, which now stipulate that selling drugs to minors will be treated as a capital offense, drug-related crimes committed by minors have seen a dramatic decline from 134 cases in 1994, to 79 in 2002.

The state has also recognized that accessibility and availability are the prime determinants in the level of drug use, & therefore cannabis use will most certainly increase dramatically if legalized. The Republic of Korea is therefore opposed to the liberalization of the various forms of cannabis, and in 1989, the Republic of Korea founded ADLOMICO (Anti-Drug Liaison Officials’ Meeting for International Cooperation); an international conference against drugs, aimed at heightening regional cooperation in the fight against drug-related terrorism. Furthermore, the state is also party to the 1988 UN Drug Convention, and is an active member of the UNCND (United Nations Commission on Narcotic Drugs), as well as frequently hosting global conferences such as UNCND Korea. As a result of the strong crackdown on drug crimes by its government and publicity activities by NGOs, South Korea has been internationally praised for its success in the fight against drugs.

As one of the four Asian Tigers and a member of the G-20 major economies, the Republic of Korea is strongly committed to seeing the trade in illicit drugs restricted or ended, so as to dissolve the funds generated towards Narco-Terrorism. There is a distinct link between the Crime of Drug Trafficking, which falls under the category of Organized Crime, and the activities of a Terror Group which falls under the category of Terrorist Organizations. Over the past decade, this link has become even more pronounced, with each category seemingly feeding off the other. This is known as the Crime-Terror Continuum, and is depicted in the following chart from Makarenko’s study on the Crime-Terror Continuum:

Hence, it is vital that governments and regional bodies understand this link when implementing policies, which should be targeted at both Organized Crime (such as drug trafficking), and Terrorism, because if one is neglected or goes unchecked, we will witness their convergence resulting in ‘Black Hole’ syndrome, wherein the two distinct groups join efforts to create the necessary conditions for civil war and therefore an economic and political power takeover.

In this regard, South Korea has not only made several efforts to curb the use of cannabis and the trafficking of drugs, as described above, but has also made notable leaps forward in curbing Narco-Terrorism, making it a model nation in the fact that it has undoubtedly recognized the existence of a Crime-Terror continuum. For instance, South Korea has implemented specific laws, including the Special Act against Illicit Drug Trafficking, which targets the economic base of drug related criminals, through asset forfeiture and additional collection of tax for illegal proceeds. Additionally, the Korea Prosecution Service, by setting up a Narcotics Division within the Supreme Prosecutors’ Office in 1989, has focused on eliminating illicit drugs in South Korea under its policy to cut off supply and reduce demand for narcotics through specialized drug law enforcement and active public relations for drug abuse prevention. The Korea Prosecution Service, with the Police and Customs, are also planning to enhance the efficiency of investigations against drug-related crimes, through special training for expert investigation, digitalization of information, and the development of forensic science, including drug profiling.

Moreover, the Korean authorities consistently exchange information with international counternarcotics services such as UNODC and INTERPOL, and have placed National police in Thailand, Japan, China and USA. In 2002, the Republic of Korea concluded a Precursor chemical Control seminar, and in 2003, Korea’s first national narcotics task force – the Joint Narcotics Intelligence Task Force (JNITF), was formed. The nation has also supported drug control efforts in ASEAN member countries, reemphasizing the words of Joon Gyu Kin, Prosecutor General of Korea, who stated at ADLOMICO 2010, “Korea will keep supporting other nations’ efforts to win the war against drugs.”

Interestingly, a team of Seoul National University scientists have taken efforts a step further, by using groundbreaking and innovative science and technology to create seven Labrador retriever clones, specifically for sniffing out drugs in airports and harbours across the state. Furthermore, in order to sever the circulation of marijuana for medicinal purposes, (medical marijuana is not a cure for any condition, but is for the management of symptoms), South Korean Synthetic cannabis has been invented, which mimics the effects of cannabis when consumed.

This underlines the South Korean administration’s resolution to stamp out the use of illegal drugs and drug funded terrorism, having recognized the Crime-Terror continuum and implemented relevant policies, laws, as well as new procedures in science and technology. Indeed, as John Holmberg argues, “There is not a single policy that will eliminate the threats posed by Narco-Terrorists…it will take the implementation of several policies that seek to mitigate the influence and effect of Narco-Terrorism.” Therefore, South Korea seems to be on the right track, and in the words of former South Korean president, Park Chung-hee, the country is determined to “…pull up by the roots the problem of marijuana smoking and similar activities by applying the maximum penalties currently available under the law.” And, by doing so, the nation will continue to enhance its status as a model nation in eradicating illegal drugs and Narco-terrorism.