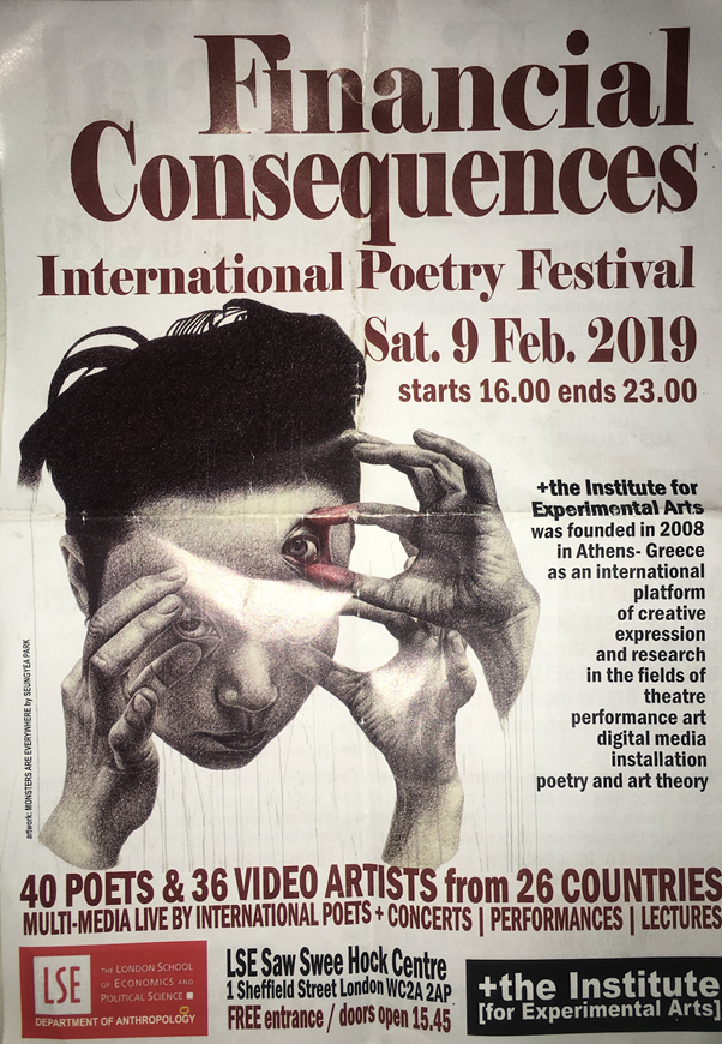 The International Poetry Festival, held by the Institute of Experimental Arts and supported by LSE’s Anthropology Department, took place on Saturday, 9th February.

The aim of the festival was to provide insights into the effects of financial crises from poets rather than politicians and was themed ‘Financial Consequences’. In their statement about the event online, The Institute wrote that “The social awareness and sensitivity of poets – in collaboration with video artists and musicians – invited from countries crushed by the economic crises offer us the best possible view to invisible sites of social life, offer us the opportunity to understand and realize the Financial Consequences of economic crises in the everyday life of all of us and especially of people in suffer.”

The festival boasted 40 poets and 36 video artists from 26 different countries.

The event, which ran from 4pm until 11pm in the SU, was free and opened by two talks that aimed to contextualise the poetry. Tasos Sagris, who is the director of the festival, opened with a speech to over 100 attendees.

His talk, focusing on political art in the 21st century, called on artists to “continue to struggle” for freedom, finishing with “death to the tyrants, freedom for all”.

The talks were followed by a two hour screening of a compilation of striking video poems from across the world. These included ‘L’ inventario’ by Francesca Bonfatti of Italy, whose video was inspired by mute cinema and Antonio Fogazzaro’s Malombra, a Gothic novel. It also included work by Janet Lees of the Isle of Man and Manuel Vilarinho who is from Portugal.

Biographies and information about these poems can be found here.

Part C of the ‘Financial Consequences’ conference saw live performances from a number of poets. The line-up included a range of experimental artists including Adrian Fisher and Luna Montenegro, artists and poets based in London who work with performance, text, film, installation and sound. Poppy Delta, an underground poet in Athens, also featured alongside poets like Lucia Sellara, from Bolivia, and artists from the USA, UK and Ireland. More about who performed can be found here.

Ashler Kessler, a Master’s student at LSE, gave The Beaver a mixed review of the event: “On the surface, an event like this at LSE should be welcomed. It was focusing on important topics (the effects of the financial crisis), bringing in alternative voices (young poets from across Europe), and using interesting ways to examine those topics. Unfortunately, it didn’t quite live up to its potential.

“The two introductory speeches highlighted the event’s broad and perhaps scattered purpose. After this the screen was lit up with some genuinely interesting video poetry that explored a variety of topics through an intermixing of poetry and images. However, even for the most curious minds, two hours of these videos is a bit much.

“The event also had those embarrassing and harmful tinges of left-wing culture as for some bizarre reason the only stall at the event was selling anti-vaccination t-shirts. All in all it brought left-wing Athens to LSE, with all its potential but also all its weaknesses.”

Mikołaj Szafrański, who is studying a Master’s in Law, did not discover the festival through LSE but enjoyed the event, telling The Beaver that “The festival brought together magnificent synergies – especially between the medium of video art and spoken word. But it is not just the form that I deem praiseworthy: the festival also reminded that poets are enveloped in a political worldliness and they can consciously choose to engage politically through art.

“I value the poets’ ability to describe the reality and to extract meaning from vastness. I am skeptical whether experts can account for the true size of economic crises, and whether scientific vocabularies can grasp the nature of austerity. Poetry appears as a more honest medium.”

On LSE hosting the event, Mikolaj pointed to the value of having cultural and artistic events on campus: “It was important that LSE hosted the festival, since the School’s campus is a place where CV nurturing hackwork is prevalent and creativity is only approved when it can be monetized. Students are preoccupied with marketing their degrees, and that leaves no space for engagement with culture. I am glad that this precious space, however tiny, was demarcated on the campus.”

The Institute for Experimental Arts was founded in Greece in 2008 in order to provide a non-profit platform for expression and research in art and its related disciplines.