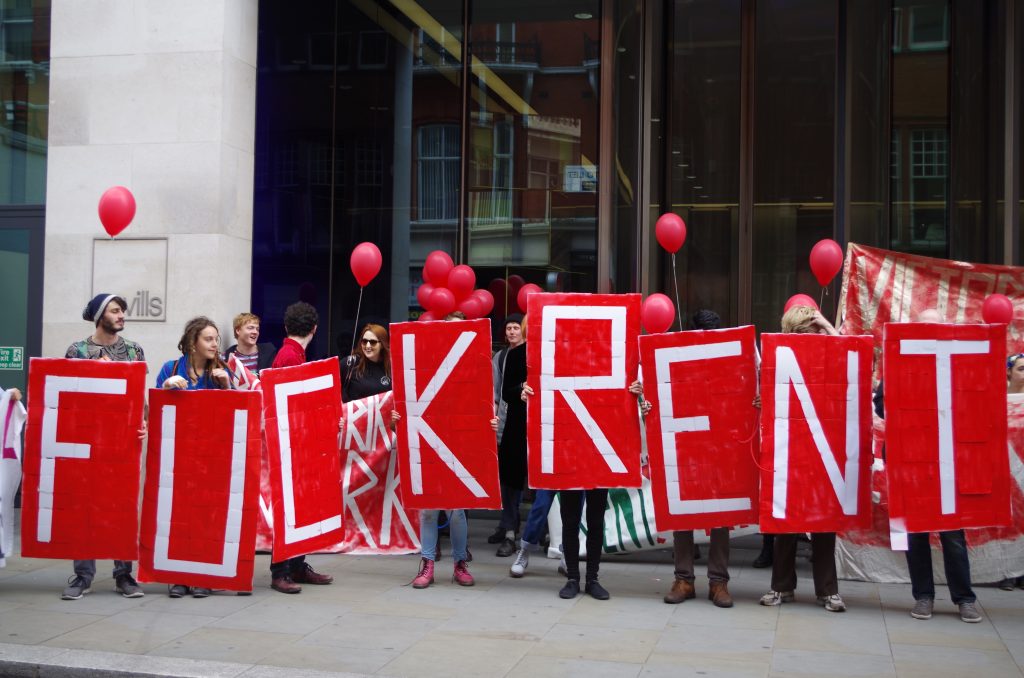 On November 20th last year the Beaver organised a panel discussion on the housing crisis. The speakers were Jonn Elledge, editor of CityMetric, Dominique Hua, an organiser for UCL Cut the Rent, and Andrew Boff AM, the Conservative’s London Assembly housing spokesperson.

I started out by asking the panel what they thought a reasonable rent for students to pay in London would be? Dominique said that while UCL think “£120 is affordable,” she thought students shouldn’t have to pay rent at all. She thinks that “rent increases are tuition fee increases in stealth” and are “tied to the reforms of 2010” which increased tuition fees and led to “education becoming commodified.” She thinks high rents put off students from attending university and that the government “can’t keep using loans for students.” All the stress from worrying about their cost of living and debt “increases [student] mental health problems]”.

Jonn thinks that the rise in tuition fees means “students expect more from education” and that’s why organisations like Unite Students have “poured money into better facilities,” increasing the quality but also the costs of student accomodation. However, he thinks Tory attempts to cut the number of foreign students might bring accommodation prices down.

Andrew says that there’s “no right rent,” but the London Assembly figure for an affordable rent is £158. He thinks high rents are caused by a lack of supply and that there has been a lack of “investment [in supply] for the last 35 years.” For him “the only long term solution is to build more houses.” He disagrees with Dom however, and thinks students should pay rent. He agrees with Jonn that the “effect of foreign student purchasing power has pushed rents up” but thinks London should welcome more foreign students, not less.

I ask whether high deposits for UK students or a requirement of foreign students to stump up six months rent to secure a home puts off poorer students from studying in London? Jonn says that the six month rent requirement might put off poorer international students, but most international students are quite wealthy. Andrew argues that “if they’re not British we don’t have an obligation to help them.” However, he says there are cases of Help to Rent schemes in some boroughs and that it’s “very rare people will default on loans for a deposit.”

We move on to discuss the disparity of power between landlords and renters. Dom says that Cut the Rent, which was also set up at Goldsmiths, was a success because “in 2015 thousands at UCL went on rent strike and UCL management took notice.” Dom thinks Tenants Unions are the way to go and gives the example of Renters Power in Newham. Jonn says “longer tenancies would give renters more power” and that “agency fees should be banned,” as has happened in Scotland, because renters have no choice but to pay them. Dom says “the answer is social housing.” She also thinks that “a lot of housing is empty,” although Jonn says “that isn’t as true as people think it is.” Dom retorts that “luxury flats are not what we need.” Andrew argues renters have power through their lease but that the housing market is “a seller’s market.” He admits “some landlords go beyond the law” and that there are “too many abuses with lettings agents’ fees” and thinks that “local authorities should be able to give penalty notices to negligent landlords.” However, he thinks foreign investment shouldn’t be limited and that the Labour Mayor of London Sadiq Khan’s policies “resemble those of UKIP when it comes to rich foreigners.”

We move on to discuss whether the housing crisis exists on a national level, given that in some areas like Birmingham houses are now more affordable than they were before the crash. Andrew says “London and the South East need another 66,000 homes a year,” but that cities like Manchester don’t have overcrowding. He thinks its daft that we’re “sucking people into London” in this country. Jonn says the widening affordability gap between London and the rest of the country over the past twenty years results from “globalisation, which has led to economic activity being concentrated in certain areas.” This, he says has created a Britain of “two nations, one where housing is unaffordable but there are decent jobs, and one where housing is affordable but there aren’t any decent jobs.” One solution, Jonn says, “would be to spread jobs around the country.”

Dom says people are “paying for the right just to exist somewhere” and that rising unaffordability in London is brought on by renters “being exploited by [a rentier class] who don’t do anything.” I ask whether we should attempt to fix the housing market or whether the state should take a more interventionist role. Dom says we should “nationalise housing,” giving people the right to exist. Jonn says “the point of markets is to distribute scarce resources,” and that, for example, the “older generation who bought housing in the 90s when prices were low didn’t do anything wrong.”

Andrew says not just the super-rich own housing and for some people renting property is their sole income, but Jonn argues that “small landlords often do cause harm – ‘little old ladies’ can be worse landlords because they can’t afford maintenance bills.” Andrew agrees, and says he was “particularly crap” when he was a landlord.

Jonn says the state needs to step in to “build more homes in the right places,” and to create incentives for developers to build affordable rather than expensive housing. But while Jonn says councils are on the whole benevolent developers because “councils have incentives to build regardless of market price,” Dom thinks council projects like the Haringey development vehicle “are there to make a profit.”

Andrew dismisses the idea of rent controls, saying they only work “where you don’t need it.”

Jonn and Andrew disagree on whether we should build on the greenbelt, the area of land protected from development that surrounds the city. Andrew thinks it’s unnecessary, and that more development should take place on public land, and proposes a right for developers to do so, while Jonn believes that some areas of greenbelt such as land near existing railway stations would be better used for housing.

I ask the panel about the significance of Grenfell and what needs to change to prevent such a tragedy taking place again. Andrew says we build “crap” social houses because “we think tenants won’t complain.” Jonn agrees, saying “estates have been treated with contempt.” He doesn’t blame local authorities though, saying that they’ve been “hit hard” by austerity. Dom goes further saying “the government has a disregard for working class lives,” and “doesn’t care about marginalised people.” Jonn adds that there was lots of evidence before the tragedy “about tenants at Grenfell saying it was a fire trap.” Andrew responds that there was “on the face of it” massive investment in Grenfell and that there “isn’t a simple solution.” Dom’s having none of it though, and says it “doesn’t matter how something looks if its unsafe,” and accuses the government of “negligence in setting the standards for cladding.”

We end by discussing gentrification. Andrew says that its good when “people of different backgrounds mix in areas” but that the housing crisis and gentrification make areas less diverse. Jonn says that “gentrification can improve areas” but that we have no discourse about “a right to stay in a place and not be pushed out.” Dom concludes nicely by observing that “areas need improvement but it depends who that is for.”

PrevPreviousLSE Students’ Union Still in Free Fall
NextCan We Find A Positive Yet Realistic Vision For Post-Brexit Britain?Next
On Key