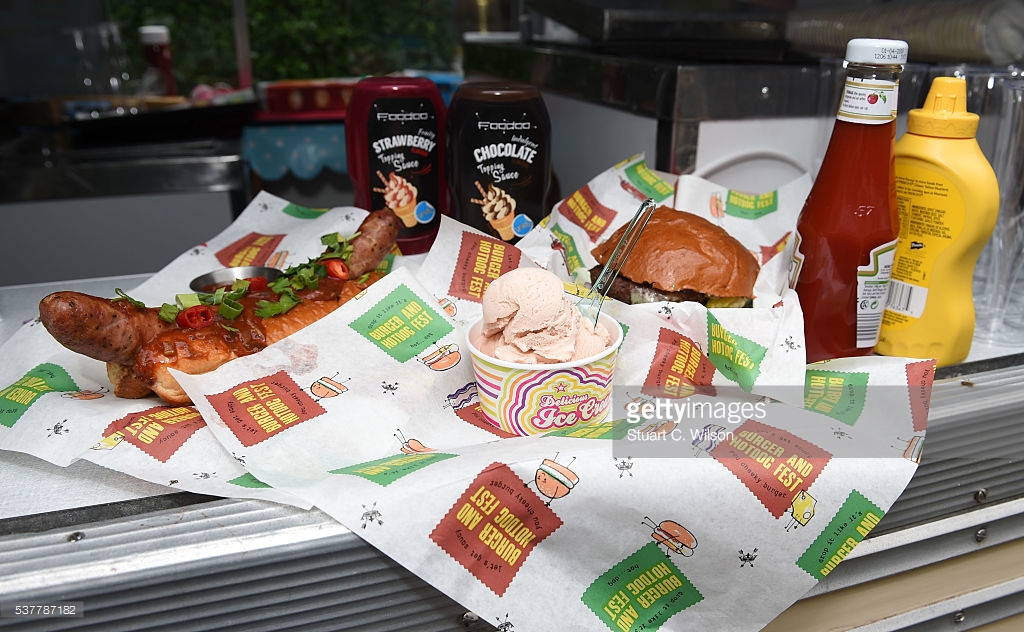 The Greene King Burger & Hot Dog Festival kicked off on June 1st, with the pub giant launching limited edition hot dog and burger flavoured ice creams in pubs across the UK. The unusual flavours were created by ice cream connoisseurs Beechdean Dairies, and these savoury treats, as well as free Prosecco, were made available in London on June 2nd, at the George Inn on Borough High Street and Sherlock Holmes on Northumberland Street (both owned by Greene King). I went along to the tasting at the Sherlock Holmes pub to see what all the fuss was about.

The hotdog flavoured ice cream was a hit, and although it looked like a regular scoop of soft, creamy ice cream, it tasted strongly of sausages and mustard, with a slightly salty note. The texture was smooth and silky, and the smack of smoky and meaty flavours combined with the coldness of the ice cream made for a memorable gastronomic experience. Mustard and ketchup toppings were also on offer, which undoubtedly would have enhanced the spicy undertones of this moreish delight.

As for the Prosecco pairing; whilst a moderately sweet sparkling wine like Prosecco pairs superbly with cheeses and fresh fruit, I generally find that sweet desserts and ice creams kill the flavours of most dry wines. However, since the hotdog ice cream was strongly savoury, an equally intense wine was needed to balance out the smokiness of the sausage and acidity of the mustard. Therefore, a demi-sec or even more preferably a dry Prosecco seemed like the correct choice, but should ideally have been served very cold.

Unfortunately, the burger flavoured ice cream was a huge let down after the success of its hotdog flavoured counterpart, as it had a bland, artificially sweet flavour, and lacked depth. Savoury ice creams tend to be hit or miss desserts, and unless the ice cream boldly captures the complete essence of the savoury food item it is inspired by, it ends up tasting halfway between a traditional vanilla ice cream and a half-baked savoury filling.

But according to pub giant Greene King, we may see increasingly popular varieties of savoury ice creams being served alongside cheese boards in British pubs. Peter Harbrecht-Parker, Greene King Food Development Manager, said that, “As a nation, our eating habits have been transformed over 40 years, with international cuisines like pizza, pasta and curry becoming teatime mainstays, rather than exotic exceptions. Our desire for new tastes, textures and experiences has accelerated rapidly in recent years with flavours from South East Asia and the Americas challenging culinary stalwarts like scampi and chips. As part of our latest burger and hot dog festival menu alone we have over ten different flavour combinations from around the world. We’ve seen savoury ice creams from Heston and other Michelin-starred chefs on various TV programmes, so why not take it to the general public and see if savoury ice cream could really be the next big thing.”

So will savoury ice creams be the next big thing to take London foodies by storm? The specialty hotdog and burger flavoured ice creams will be available in more than 150 pubs across the country this Summer, on selected dates, until the 31st of August. To find your nearest participating pub, visit: www.findaproperpub.co.uk/burger-and-hotdog-fest