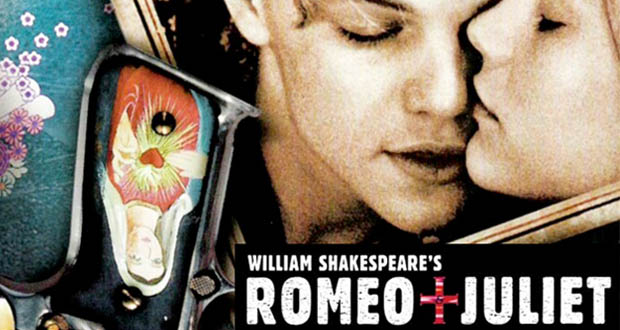 Newsweek famously wrote that Luhrmann’s Romeo + Juliet is ‘So enslaved by its worship of Energy that you want to slip it a Valium.’ But after watching the film and comparing it with Shakespeare’s original play, I find myself in disagreement with this statement as I feel that the film reflects the director’s incredibly bold and modern vision in reworking one of Shakespeare’s greatest romantic tragedies.

Luhrmann’s 1996 William Shakespeare’s Romeo + Juliet is fast paced and exuberant, and stylistically is a visual work of art. The colourful settings add youthful vigour to the film and keep the spectator spellbound from the moment Romeo and Juliet’s first glimpse each other through a glass aquarium, with muted blue lighting and the camera zooming in on swimming fish creating a stunning cinematic effect. By using the purifying symbol of water, Luhrmann elevates the lofty idealism of Romeo and Juliet’s love in a manner which would have been much appreciated by both modern and Elizabethan audiences. Even the famous Balcony scene is enacted in the Capulet swimming pool with the two lovers encapsulated in water, thereby isolating them from the destructive hatred and violence of the rest of the play. Luhrmann also employs a fine cinematic trick to create the erotic effect of two bodies merging into one, invoking the sublimity of Romeo and Juliet’s love.

The themes of time and haste are greatly heightened in Luhrmann’s interpretation, and unlike in Shakespeare’s play, there is a greater emphasis on human flaw rather than fate as the main cause of the tragedy. A dramatic plot twist in the final scene results in Romeo hastily drinking poison simultaneously with Juliet awakening from her faked death, thereby attributing Romeo’s undoing to his tragic flaw of impetuosity rather than Fate, and drawing sympathy from modern audiences in an instance of cinematic humanism.

Whilst Luhrmann’s film certainly has its merits, this spectator finds that it is still no match for Zeffirelli’s 1968 classic. William Shakespeare’s Romeo + Juliet is, in the words of Baz Luhrmann, “a created world”, and a world in which the tragic beauty and transcendental nature of Romeo and Juliet’s love is lost in what appears to be at times an extended music video.

In certain scenes, the excessive violence, bloodshed and bawdy humour downplays the tragic beauty of Shakespeare’s play, in a riotous cacophony of abstract choreography, modern music and visual traffic. And whilst DiCaprio and Danes make an effective couple, their romance lacks the intensity and vigour of Whiting and Hussey. On her own, Claire Danes proves to be an impressive actress portraying both verve and vulnerability, speaking Shakespeare’s verse with an effortless grace beyond her years. DiCaprio’s performance is incredibly powerful, especially in his heart-wrenching cry, “I am fortune’s fool!” as violence clinches his fate. However his delivery of Shakespeare’s verse lacks polish due to his corrupt pronunciation as he doesn’t round his vowels, making the dialogue sound forced.

And whereas Zeffirelli’s 1968 film version only shows Lady Capulet and Tybalt dancing together at the Ball, Luhrmann’s shows them dancing and then kissing each other, suggesting an incestuous relationship. Whilst Shakespeare has certainly never been sexier on screen, this reworking of the Capulet Ball scene, full of gleeful obscenity, detracts from the solemnity and sublimity of Romeo and Juliet’s first meeting and their love.

Furthermore, Luhrmann’s portrayal of Mercutio as an openly gay African-American with a hipper-than-thou attitude, who dances erotically to Young Hearts Run Free at the Capulet Ball, creates bawdy humour and is a cheap effort to buy young cinema fans. Such an open expression of homosexuality would have shocked puritanical Elizabethans since the concept of a ‘gay’ did not exist in Elizabethan England. However, Mercutio’s sexuality is likely to draw empathy from liberal modern cinema-goers, who may find themselves asking if Mercutio died for Romeo because of his sexual love for him, and whether Romeo concealed his marriage from Mercutio because it would have hurt him.

Throughout the film, Luhrmann’s obsession with violence and bloodshed brings to mind Clint Eastwood’s Dirty Harry film series. The play’s opening brawl is now a vicious gun fight at a gas station which erupts in flames; literally evoking Tybalt’s fiery nature. In this way, the spectator is exposed to extreme violence from the very outset, cinematically evoking the theme of hatred in a much stronger light than Shakespeare’s original play. The visual spectacle of blood is sickening, and culminates with the overhead close up of Juliet shooting herself. The violence of her death overshadows its tragic quality in this scene and symbolically taints the sublimity of Romeo and Juliet’s love. Such a gruesome display of bloodshed on stage would certainly have been rejected by conservative Elizabethans.

But Luhrmann redeems himself in the Tomb Scene, wherein Light imagery reaches its zenith with Juliet’s body surrounded by candles and electric-blue neon crosses which glow brightly after she and Romeo die, suggesting that their love will transcend even death. Shakespeare’s text comes to life in this scene, with the use of props and imagery equivalent to the playwright’s verse. Whereas Shakespeare uses contrasting verse form, tone and pace to create effect, Luhrmann matches this through his use of varied lighting, symbolic settings and novel plot adaptations. Certainly, if Shakespeare had the opportunity to make use of these modern visual effects, I suspect he would have done so too.

Overall, Luhrmann’s Romeo + Juliet breathes new life and vitality into Shakespeare’s most tragic play. The film is as exquisitely beautiful as it is tragic, and is sure to captivate and intrigue modern audiences worldwide.

PrevPreviousFood Review: Hotdog and Burger flavoured Ice Cream
Next‘Predictability And its Limits’ In its Final WeekNext
On Key