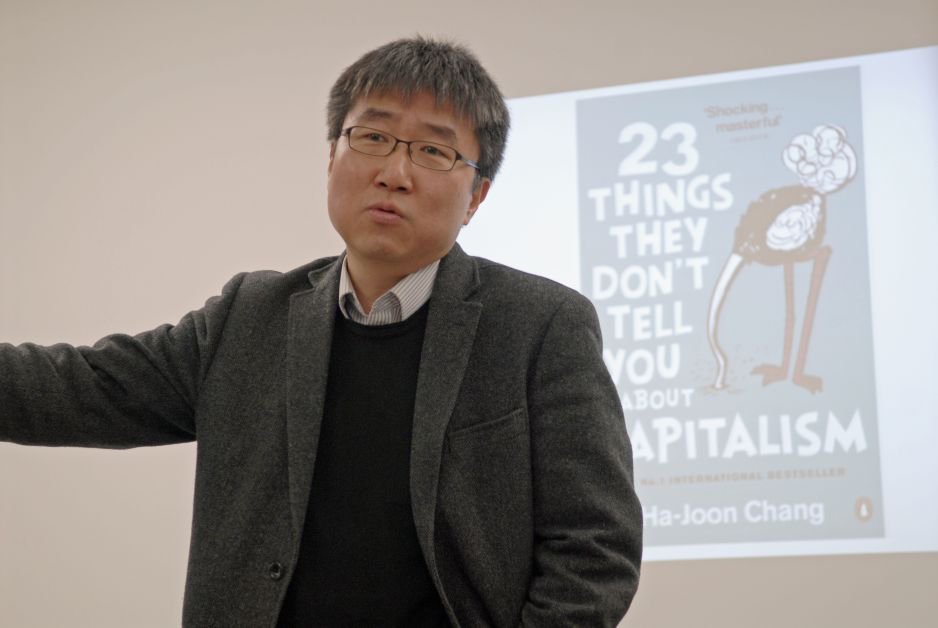 The Beaver editor sat down with the Cambridge economist, whose ideas about trade and development have influenced policymakers and academics the world for over two decades. Professor Chang’s books have sold in the millions, and their author celebrated for his down-to-earth writer’s voice and keen eye for a metaphor. In person, he is no different.

“Celebrity” and “economist” are two words that seldom appear together, but in the case of Ha-Joon Chang, the pioneer of development economics, both might be warranted. His fans certainly think so.

After giving a two-hour presentation on the virtues and challenges of modern industrial policy to a packed-out Sheikh Zayed Theatre, and after fifteen minutes of impromptu book signings and selfies with adoring students and readers – half Londoners and half from his native Korea – I finally get a chance to ask the renowned economist a question everybody beforehand seems to have missed. What is economic development?

“The popular, neoclassical view of development is that the economy is like a balloon. It gets bigger and bigger and does better and better. You can make the balloon bigger by adding money, say, or discovering oil. Equatorial Guinea until 1995 was one of the thirty poorest countries in the world. Suddenly with the discovery of oil it became one of the richest in Africa, with a $22,000 per capita income in 2012. But that was at the height of oil prices; now the income is barely $9,000. That’s not development.

“The other definition is of the developmentalist tradition, starting with Alexander Hamilton and going through to Hirschmann and Kuznets. They see a bigger balloon alone isn’t enough. There’s a sustainability that depends on the quality of the inside of the balloon, which can be more complicated. You have to generate long-term capabilities and knowledge autonomously. That’s development.”

Deriding these potential problems of growth, Chang is beginning to sound like another renowned economist; a man he calls “my friend Joe Stiglitz.” If development inevitably creates its own problems of economic inequalities, how can governments hope to foster inclusive outcomes?

“Huge inequalities are not inevitable. For one thing, a lot of inequality of outcome depends on the kind of economic policy pursued – welfare state policy, taxation policy, financial regulation. If we say ‘all inequalities can be blamed on globalisation’, how do you explain that inequality in Switzerland and the Netherlands has hardly changed in the last four decades? These are economies which are far more open than the United States! It’s because these countries use certain policies to transfer income. Switzerland and the Netherlands decided ‘We won’t accept this outcome, and we’re going to change it.’

“There’s a huge range of outcomes you can achieve from the same globalisation we are all experiencing, and the same technological changes and global financial systems.”

One of the ways Chang recommends poor countries retake control of their economic development is via tariffs to protect so-called “infant industries”—new and growing economic sectors yet to be exposed to the harsh winters of the competitive global economy. This form of development-focused protectionism has roots in Friedrich List and, once again, Alexander Hamilton. Such policies contributed significantly to the early industrialisations of List’s and Hamilton’s native countries, Germany and the US, during the nineteenth century.

Nowadays, however, the World Trade Organisation takes a hawkish approach toward countries that lean on protectionism. Chang, nonetheless, advises small countries “break the rules” where they can.

“It was rich countries after the war who wrote these rules, and rich countries who don’t follow them when they choose. Look at the way the US rejected the Kyoto Protocols after its diplomats helped to write it.”

I counter that tariff-driven development is, perhaps, a dated notion; today’s globalised economy necessarily competitive. Either way, few countries have the scope for the technological improvement of nineteenth century America, or the conducive political institutions of Bismarck’s Germany.

In Britain at least, City traders and economists are terrified of a return to protectionism in the increasingly likely case of a “no-deal” Brexit. Should they be?

“WTO rules are a problem for Britain because you weren’t party to the agreement when it was signed. It was signed together with your EU partners, which now means Britain will have to renegotiate its own terms. This will create short term problems of time and resources and aggravation. But any long-term problems will depend on the result of these negotiations.”

What does it say for the strength of international institutions, moreover, if they see dwindling support among wealthy states and greater ill discipline among the poorer? Can the international community survive weakened, overstretched global rulemakers?

“Small countries breaking rules here and there would only be a secondary, or even tertiary, problem. The biggest issue is the US basically abandoning these multilateral commitments. I’ve criticised the WTO and other multilateral institutions for their rules but the multilateral system, by definition, is better for smaller countries than bigger ones.

“It’s a difficult balance to strike: on the one hand you can’t break all the rules and expect to be taken seriously – otherwise you might as well be North Korea. But on the other hand, by breaking these rules you’re implicitly saying that these rules are not actually fair. In the long run you have to reform the rules; but this will take time. Policymakers in small developing countries therefore have to make a choice. Do you try to be a good citizen despite thinking these rules are unfair, and you see the big guys ignoring them all the time, or do you break the rules?

“As an academic it’s easy to say ‘Never break the rules, because if we all broke rules we didn’t like, what would happen?’ But as a real-world policymaker you could face a reality of 200,000 farmers who can’t feed themselves, and if you break the rules you might be able to provide for them. Academics have to acknowledge these real-world questions and challenges.”

Professor Chang makes a compelling case for the renewed self-interest of developing countries, often using Korea’s high-speed technological catch-up as an example to learn from. Korea’s outward-looking economic focus in the last twelve months, however, seems to have taken a different turn: is Kpop a twenty-first century form of industrial policy?

The professor laughs – more, admittedly, out of confusion than acceptance. I tell him that my fifteen-year-old sister was willing to sell an arm for a BTS ticket and still couldn’t get one. Policymakers in Seoul seem deeply involved in an increasingly lucrative export, hosting Korean Pop conferences in London and promoting the industry at every opportunity.

“Kpop didn’t start with state support, but when it [took off] the Korean government jumped on it. They’ve now created a huge arsenal for industrial policy, there. In recognition of the importance of so-called soft power, they think it’ll help with international negotiations and export sales. Clearly it has!”

Our fifteen minutes have long ago expired and, soon enough, the professor is rushed away to a highly anticipated dinner reservation. He turns around to add a final thought.

“By the way, BTS are on the Graham Norton Show tonight. Watch it.”