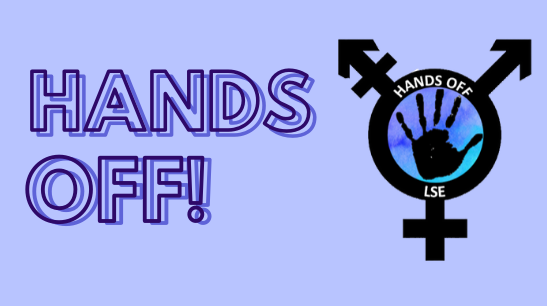 On 2 December, Hands Off LSE launched a week of events to raise awareness for sexual violence and initiate discussions on campus about how to support victims both institutionally and personally. Events included panel discussions with academics and the LSE Athletics Union, a creative workshop with My Body Back Project, and a fundraiser for Rape Crisis.

Ella Holmes, Hands Off LSE organiser, said the series of events was born out of conversations between LSESU Women in Politics Society and Masters student Sara Laursen Hald last year. Hald told The Beaver, “The #MeToo movement opened up a wider, and much-needed, discussion about sexual violence and rape culture. However, too often survivors still feel silenced and don’t know where to turn for help, especially at universities. This week is all about empowering sexual assault survivors to let them know that they are supported and loved.”

The week began eight days after a UGM motion to improve LSE’s supporting infrastructure for survivors of sexual assault, including hiring a permanent, salaried, sexual assault counsellor in the EDI and improving signposting for support services. The motion was passed with an overwhelming majority of almost 90% of voters in favour.

The panel on Monday, 2 December, featured Dr Suki Ali, associate professor at the Department of Sociology, Dr Taylor Sherman, co-chair of the Equity, Diversity, and Inclusion Reps Network at LSE, and Tracy Wise, founder of Safe Gigs for Women. They discussed the impacts of the #MeToo movement and how it offered new systems of accountability through social media, particularly on university campuses. Dr Ali emphasised that although #MeToo created an important space for support and solidarity, it is only “a balm” and not the whole solution. She said it is important to remember that courts and other institutions often let down survivors of sexual violence and that they need systemic change. Dr Sherman said that change also needs to start from the ground up, by teaching children about consent and their right to set their own boundaries.

Wednesday was a day of fundraising for Rape Crisis. Their centres provide specialist, independent, and confidential services for women and girls who have experienced any form of sexual violence, across England and Wales. Hands Off LSE sold baked goods outside the SU and after LSESU Drama Society’s production of Emilia. They raised over £200 and plan to continue their bake sales into next week.

Ella Holmes said the event was an important way for Hands Off LSE to facilitate discussions of accountability between AU members and their executive, “We wanted to be able to tell AU members that [their executive] care about this issue, this is on their radar… At the same time, I wanted to push them, have their ideas open to scrutiny, and have people suggest their own ideas as well.” There was an anonymous suggestions box in the room.

The panel discussed the range of ways in which the AU can improve female safety, both on an institutional level, by empowering AU members to campaign for changes, reforming the complaints procedure for sexual assault and harrassment survivors and witnesses, providing active bystander and ally training, and on an interpersonal level by changing AU culture.

Expanding on the reform to AU complaints procedure, Sam Rowlands said, “We’re looking at introducing a tiered approach and giving people a lot of different access points depending on what they feel comfortable with. That fell by the wayside over the summer but we are currently lobbying within the SU to make that change because next year we won’t be sitting here… It’s about making sure that this conversation goes somewhere tangible.”

Panel attendees expressed their concerns regarding diversity in the AU and the role this plays in toxic lad culture. Charly Brady expressed similar concerns, “The AU is structurally not diverse… its why there has not been a behaviour change. I really appreciate the fact that the men’s teams are hosting consent workshops, but after this what changed? Have men’s teams become much more diverse?” She emphasised the positive impact of actively working to diversify the Women’s Rugby team on its culture of safety, accountability, and open communication.

Laura Goddard said, “When I was trying to get the word out about the motion, what was one of the most positive aspects was the number of people who I didn’t expect to reach out did reach out. For the first time since being at LSE, I felt this lovely community sense. It’s important that we continue this and not let this be just one week when we talk about sexual assault and then move on with our lives. Every person deserves to feel safe, and that’s not just a soundbite, people deserve to feel safe and they haven’t felt safe.”

When asked about how LSESU will be lobbying LSE to execute Goddard’s motion, David Gordon said he had been in a meeting with LSE management earlier that day, including Joanne Hay, Deputy Chief Operating Officer at LSE, “Basically all of the people required in a room to make the motion happen [were there]. We’ve been having a conversation about some of the more financially difficult things in the motion, that is, hiring a full-time salaried sexual assault counsellor. They have a model that they are working towards that is different from what was proposed in the motion. We want more holistic support while they are seeking someone part-time.”

Ella Holmes said, “Our main aim is to get this independent sexual violence support worker instated by at least the end of next term. We are absolute on our demands and we won’t take anything less.”

David Gordon assured panel attendees that students’ demands will not be compromised, “If we don’t get the changes we want quickly enough, we’ll be coming back to you guys to help us rally the cry. When people come out with banners they don’t know what to do and the money flows faster than you can imagine.”

“Now we want to transform Hands Off LSE into more of a collective, perhaps model ourselves on the LSE Climate Emergency Collective. Since we have had interest from academics, students, and people in the SU, we want to have a collaborative approach. We will be looking at more aggressive action to prompt these conversations along,” said Holmes.