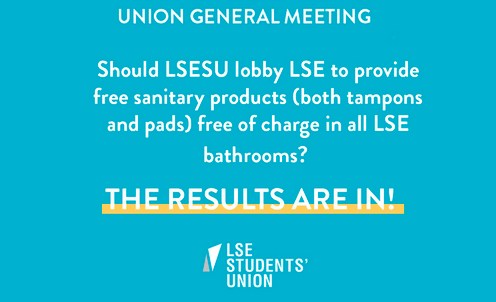 The voting results for the final Union General Meeting motion of the year to provide free sanitary products in all LSE bathrooms emerged inquorate Saturday afternoon.

The motion proposed by Maria Golub, part-time Women’s Officer, received a total of 243 votes, 227 of which were for and 14 against while 2 abstained.

“I think there are a few reasons why the turn-out has been quite low,” Golub told the Beaver. “I think the important one was me not campaigning and advertising enough the vote. As I can see 93% who voted voted for, meaning that the majority of students just did not know about the motion happening.”

Golub also acknowledged that students may have lost faith in the idea after witnessing ongoing problems with the current provision offered in the SU.

“I can see an ongoing problem with the absence of sanitary products in SU building that despite my effort is not being solved,” she said. “The absence, obviously, impacts negatively my motion.”

Golub also acknowledged this at the UGM, where eight students, four part-time student officers, and three sabbatical officers assembled at the Arc to listen to her follow up on last year’s successful motion to provide free sanitary products to students in the SU.

In response to concerns that some students may taking more of the share of sanitary products provided, Golub said, “As long as people who cannot pay for menstrual products have access to them, there is no harm done.”

Golub added, “That problem exists and it has happened a few times in the SU, I do acknowledge that. But my answer to that is: if people do take it, it means that they cannot buy it, and if they cannot afford it, I think we should be happy that they do take it.”

“I saw it would be very logical to continue with [last year’s motion] because that was only the first step I believe. It’s a bit strange if you’re in Lincoln’s Fields or in New Academic Building, that’s quite far and you need to go to the SU to get [sanitary products]? And also if [they are] in the Student’s Union, that applies only to students because faculty and staff don’t usually go there,” Golub added.

The Women’s Officer told the Beaver that she is perplexed at LSE’s lack of steadfastness in addressing an issue that other schools around the world have already tackled. She said, “It’s in all universities in Scotland. My friend, she studies in St. Andrews and she told me that they have individual kits…so it looks to me like we in the LSE are in the Middle Ages.”

Scotland dedicated five million pounds to fighting period poverty in Scottish education at all levels in 2018. Horizontal comparisons aside, it is an inevitable part of the female experience that does not get enough attention, Golub explained. She added, “I think it’s something about the visibility because we need to speak about it openly because that’s part of the human body, what students and women experience. It isn’t something that we choose to do.”

Golub is also adamant that sanitary products are provided in both men’s and women’s bathrooms. She said, “LSE is a very inclusive space and there are people who self-identify as female and who may also represent transgenders and we do need to include everyone. The usage in the male bathroom will be less than in female bathrooms,  but it does not mean that we should not put them there.”

Laura Dowling, a third-year International Relations student present at the UGM, supported the motion because of her own experience in dealing with the added pressure of always having to be prepared in order to avoid additional costs. “Obviously I identify as a woman, I have periods myself…I go to the shop to buy it and it’s like “really like I got this stuff at home” so I’m buying again just because I don’t have access to them when I forget them at home,” said Dowling.

Speaking about whether she will continue the campaign, Golub said, “I will remain active on the matter as I could clearly see a very positive response. So, I will continue to campaign. I am now getting in touch with the Gender Equality Steering Group, Departments, and the Estates as it is, clearly, the issue that concerns not only students but faculty and staff respectively. And I would like to thank everyone who voted.”