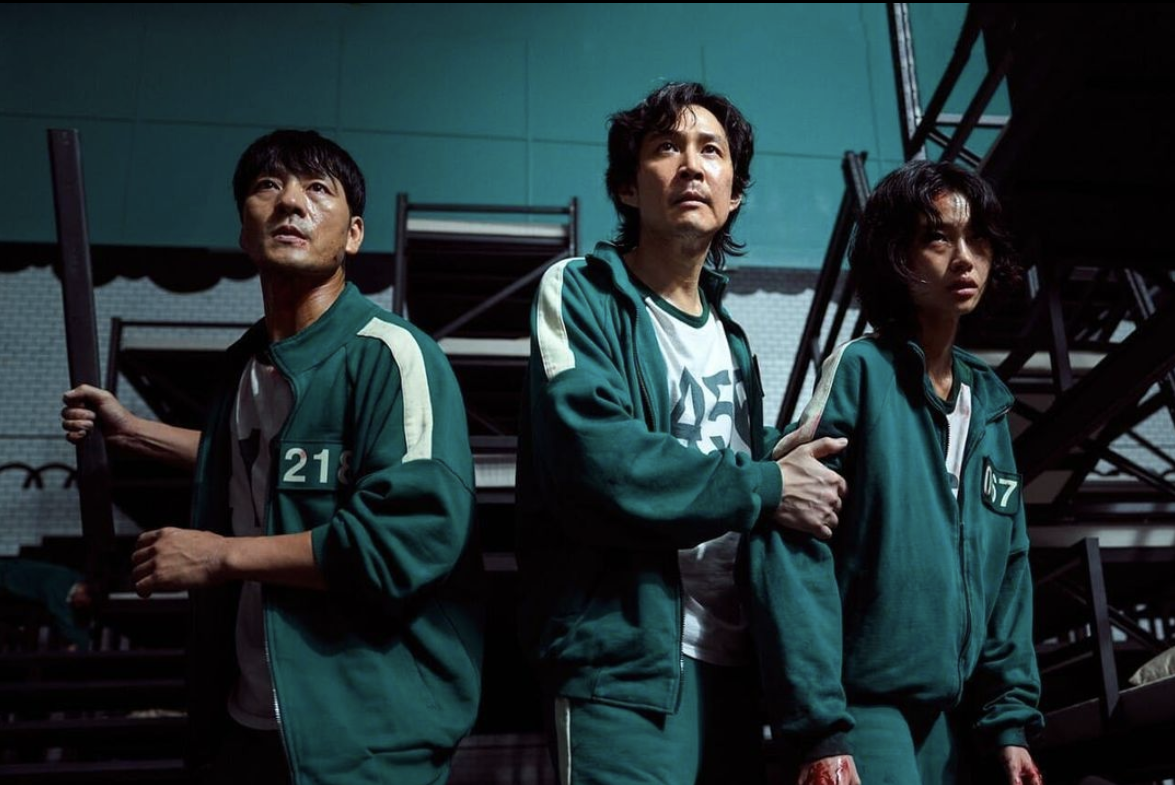 ‘Horses on a racetrack’: Squid Game’s stark portrayal of exploitation under capitalism

“You bet on horses. It’s the same here, but we bet on humans.” This is Front Man’s answer to Gi-hun after he asked why he and his fellow players were put through such a harrowing experience. Their exchange encapsulates Squid Game, bluntly demonstrating the divide between the ‘VIPs’, who are so ‘bored’ that they have created a barbaric game for entertainment, and the ‘players’, like Gi-hun, for whom gambling is his only escapism. Faced with crushing debt, the reality of the ‘players’ is so horrific that their only viable alternative is participating in a game which will most likely kill them. Yet, despite being fully aware of these circumstances, the ‘VIPs’ believe their situations to be parallel – considering ‘boredom’ as terrible an affliction as being unable to access healthcare, childcare, food, or a safe home.

Over the course of the nine-episode TV series, reminiscent of The Hunger Games, Hwang Dong-hyuk sharply portrays the horrors of late-stage capitalism, loosely inspired by his own financial struggles in 2008. 456 ‘players’ in dire financial situations are recruited by a mysterious organisation to take part in a set of six children’s games. These games are revealed to be a deadly perversion of childhood innocence: elimination from the game results in a far more permanent fate. The winner of this cut-throat competition is rewarded with 45.6 billion won (the equivalent of £28 million) – more than enough to pay off their debts.

Participation in the games isn’t binding, though. If the majority of players agree to terminate the game, they are able to return to their previous lives. The money accumulated over the course of the game is then distributed among the families of the players who have died. This happens in one of the earlier episodes – following the first game, the players vote and, with a majority of one, are able to terminate the game. This pseudo-democratic system has been the subject of some controversy among viewers, many of whom argue that, as the players have themselves volunteered, they deserve to face the consequences. Reviewers have similarly emphasised that “[t]here isn’t some authoritarian state forcing them into homicide…these desperate people have volunteered”.

However, these comments fundamentally ignore the point Dong-hyuk makes clear in episode two. The episode, which is bluntly named “Hell”, depicts the players’ complete lack of alternatives. Even after witnessing the brutality of the game and barely avoiding death, they have no choice but to return.

Ultimately, any freedom is illusory – Ali’s attempts to escape the game by negotiating wages with his boss fail pitifully: as an individual, he does not have enough power to demand the wages he is owed. Rather than joining Ali in solidarity, the workers stand by and watch as he fights his boss in a desperate attempt to reach the stack of cash in his boss’ jacket. Similarly, Gi-hun is unable to afford medical fees for his diabetic mother. Though he returns to the game in order to fund her hospital care, when he ends up winning, it is too late: he opens the door to their house only to be greeted with her corpse on the floor, a symbol that powerfully articulates the show’s broader point about the zero-sum reality of capitalism – you work, or you die.

The players are not alone in their oppression, though: the workers, responsible for carrying out the orders of Front Man, are just as disposable. Their living conditions are similarly drab – the rooms they are housed in look like prison cells, with little space to do anything but sleep and eat. This only serves to heighten the contrast between the majority and the elite minority, who observe the games from a lavish room, decorated with kneeling humans – a stark visual metaphor of the position held by the ‘underclass’ in society.

During the same scene, a VIP from America commands one of the workers to ‘satisfy’ him, demonstrating the intersection of colonialism and capitalism, and the ways in which Western countries assumed ownership over the bodies of people of colour. Like the players, who are referred to by their numbers, the workers are stripped of their individuality and ordered to wear masks that hide their faces. When, during one of the games, a worker removes his mask, the player who is pointing a gun at him is forced to acknowledge his humanity. Despite this momentarily saving the worker from death, his violation of Front Man’s most important rule (keeping your mask on at all times) means he is killed anyway.

For the VIPs, the mask gives them anonymity, whilst also giving them the space for self-expression. In contrast, the workers are subjected to conformity; their uniform serves the system, suppressing their individuality.

Hwang Dong-hyuk also explores the lack of unity among workers, suggesting the fruitlessness of collective action in a society where workers no longer hold bargaining power with their employers. In episode five, Gi-hun recounts the strike he took part in at his workplace after a large number of employees were suddenly laid off due to the company’s financial troubles. He bitterly describes how his bosses “ruined the company and held us responsible”, making a powerful observation about the ways in which workers’ meagre rights are exploited so that employers can avoid the consequences of their mistakes.

The rise in power of private corporations is depicted throughout the show. The organisation is able to collect data and spy on every potential player with zero accountability. When a policeman attempts to infiltrate the island and report his findings to his boss, the Front Man is completely unconcerned, only making a blasé remark about the incompetence of the Korean police. The interaction between the two characters – which ends with the policeman being shot – is a bleak commentary on the hegemony of private corporations and the ultimate subservience of the state to a greater, profit-driven power.

Despite the show’s final episode weakening its earlier critique by suggesting that Gi-hun has the potential to take the organisation down, Dong-hyuk’s choice to make Gi-hun win the bet against Il-nam, proving that humanity has the capacity for altruism, is a particularly important statement. While some viewers may be cynical and side with Il-nam’s view of humanity as wholly selfish, this perspective ignores the way Squid Game has depicted that material conditions are largely responsible for our willingness to help others. Through this lens, then, we can interpret Gi-hun’s change in hair colour as the transgression of the private into the public: in a system which demands conformity from both players and workers, distinguishing oneself is a radical reclamation of autonomy over oneself.

Such a hopeful conclusion may be naive to draw though, judging by the show’s reception. Although Hwang Dong-hyuk’s aim was to “write…an allegory…of modern capitalist society”, Squid Game is arguably reinforcing capitalist realism rather than challenging it. After all, if billionaire Jeff Bezos is comfortable tweeting, without a hint of irony, about how he “can’t wait to watch the show”, we certainly have a long way to go before we achieve the radical change Squid Game advocates for.