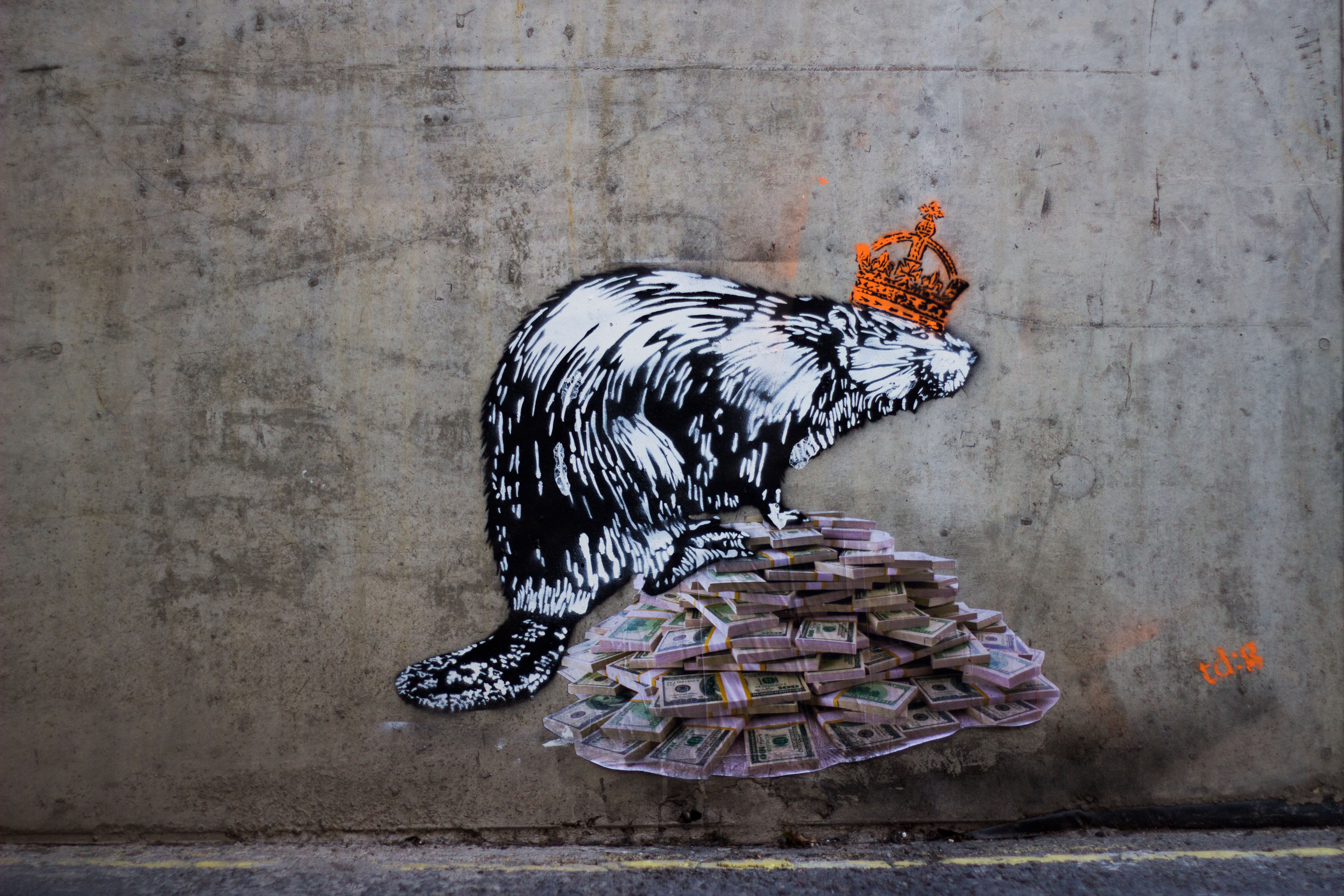 An interview with the LSE graffiti artist

I guess we first want to ask about the location. How did you choose it and why?

Well, a big part of the decision was definitely convenience. I had to avoid getting caught so I chose a spot that was easy to enter and exit when necessary and where there were no security cameras. I was real important to find a good spot so I had to prepare before hand. Where it is, is great because it’s hidden, but at the same time everyone will have to pass it at some point and so will actually see it. I didn’t want to do it on an actual building because the point was not to damage the university in any way – that would be a step too far. The wall I chose is a temporary one around the construction area and so it was a way to make a statement against the construction and to reclaim the space against the disruption it’s causing.

Was that an important motivation for you then – to fight the disruption caused by the construction site?

Not completely, but I was really frustrated with it. When I chose to come here I had no idea that the construction was happening and it has made my student experience slightly worse so I wanted to fight against it. So in a way it was motivated by my personal experience of LSE life and it still is. I don’t want to feel detached from my work, it’s nice being able to observe people’s immediate reactions to my work.

Aside from observing immediate reactions, what do you hope that people take away from it?

What I want people to do is to take time to stop. People often just rush from one class to another without thinking so I’d like them to take the time to appreciate my art. They don’t even have to like it, as long as they stop and think about the message of the piece. But if they like it, that’s even better!

So you don’t necessarily care about people’s interpretations as long as they take something from it?

Yes. I can’t even say that I have a distinct interpretation. It’s very open and whenever people ask me about why I’ve done a piece of art or how it should be interpreted, I’m never 100% sure. In fact the meaning of pieces can often take shape through conversations with other people as different ideas and views are shared. I can’t be sure of the message because it changes and that’s the nice thing. Even though I had this plan in my head of what I wanted it to be, it takes on a life of its own- you can take away what it means for you.

Do you have any specific interpretations for the different parts of the piece? We thought the crown was maybe a reference to their desired status and the way they care about image more.

I thought about the Crown as part of the British monarchy and also a symbol of King’s college! But at the same time I was thinking about what Karl Popper said: “I would rather find a single causal law than be the King of Persia” and how this contrasted with LSE’s motto “To know the causes of things”. I thought that was interesting.

It is. I always think it’s fascinating how in the creative process you are often drawing from so many different ideas during its creation that you often don’t think of the piece as a whole, but rather as its separate parts.

Absolutely. And I don’t think I saw it as a whole until seeing other people’s reactions to it. Of course I had an overall idea of the outcome, but the full meaning of art often isn’t clear until it’s interpreted in the environment in which people see it. For example it was interesting to see how the timing of the piece coincided with the situation of the LSE payoff.

So you’ve been talking about the specific ideas and references you made for aspects of your piece and yet you also talk about the fun in the freedom of interpretation – in some ways do you think you’ve come to us to let people know about these ideas, that you want them to notice these influences?

Mmm, yeah interesting, maybe. It’s true that before I even started, I had spent hours thinking about the execution of the piece, creating the stencils etc. You spend so much time on it that you end up thinking more and more about these things – the meanings, and what it should convey. You also have a lot  of conflicting thoughts about things – maybe I came to you to understand  this more? I guess there’s more to to think about than what is presented? I’m not sure. There were definitely ideas that went into it that then changed as the piece started to come together – even for me it is not so clear anymore.

Do you think then that there’s more meaning and value to be found in talking to others about what they think it represents?

Yes. There are many different ways to think about it and maybe if I talk about it and people read it, they’ll stat thinking and engaging with it more.

Do you think that’s one of the big positives of anonymity? That when there’s no personality attached to it, it becomes a piece for everyone, just another part of the public space?

Do you plan to do more graffiti around campus?

I think I might. The pieces won’t be as critical but more aesthetic things to look at.

Is this still with the motivation of reclaiming space?

Yes, reclaiming space, but also making people aware of the importance to enjoy the small moments and the small pieces of beauty. It’s important to do this to escape the stress, that is so central in LSE culture.

And I think LSE needs that reminder!

Definitely. LSE could do a lot more to improve the creative spaces it offers. Starting with changing those lousy pictures in the classrooms!

There are certainly small things LSE could start doing to improve the creative space and make it a better environment.

Yeah, that’s why I was really excited to read about the arts fund, but it does say a lot about LSE that they are more concerned with their image than the actual student experience.

What do you think is the best way for students to help create this kind of space?

And perhaps to be inspired by it and start to reclaim space too? To be more active about reclaiming the student experience?

Absolutely – people should be more active. You hear so many complaints from students who then don’t do anything about it. I’m not telling them to do graffiti on the walls or damage property but to find more creative ways to challenge their problems. There’s much more to uni than work and things can be done to change this environment.

I mean would you not say that because you’re part of the Beaver that you are enjoying your university experience more?

Definitely! Being able to have a creative outlet really does help – in terms of stress and just thinking about things differently. It has helped me to enjoy it a lot more and to work out what I actually want from LSE. It’s too easy to fall into patterns because you see what everyone else is doing and feel that is the only way to do it right, so trying other things makes it easier to define your experience of university as you would want.

Is there anything else you want to be asked about?

Is there anything else you’d like to ask me

No, haha, I think we’ve got everything

Yeah I think I’m happy too. I’m curious to see how it turns out!

PrevPreviousWould you like it back?
NextWhy we shouldn’t neglect activism through artNext
On Key